Documentary on the Challenges faced by Syrian Working Women in Lebanon

As part of the project for “Syrian refugee women’s employment in times of conflict; prospects and challenges”, the Arab Resource Center for Popular Arts (ARCPA), commonly known as AL-JANA, has documented stories that reflect the perspective of five Syrian refugee women and a Palestinian refugee woman coming from Syria and to discuss alternatives to conflict reduction, and synthetize society towards the problems faced by working refugee women.

The movie tells the stories of Syrian and Palestinian working women, who had to flee the war in Syria and seek refuge in Lebanon. The six courageous women, documented in the movie, share their experiences and their own point of view, while reflecting on their new life in contrast to the life they left behind in Syria.

The audience gained an insight about the challenges the women had to face and got acquainted with their former life, their dreams and their fears.

The lives of each of the women in the movie changed with the outset of the war in Syria, who now had to accustom themselves to their new “home’’ in Lebanon, not only in regard to their place of settlement, but also in terms of their relationships with their husbands, their families and the hosting communities. Furthermore, not only their lives changed, but also the women per se and their attitude towards themselves changed, through their experiences they gained self-esteem and self-confidence.

Each woman in the movie underwent an astounding self-development in the new situation they have found themselves in. Before, when they lived in Syria, the women were not allowed to work or study after their marriages. Their only duty was to stay home to take care of the children and the household. After fleeing to Lebanon, their lives changed tremendously. Their husbands were in many cases not able to find work in Lebanon, in other cases some women were left on their own as their men had to stay in Syria. This meant that the only way for the women to survive was to start working in Lebanon. Eventually, the women found job opportunities with civil society organizations where they experienced a new sense of responsibility and freedom. Moreover, the jobs allowed the women to gain back their self-esteem, mostly because of the appreciation they received in their new jobs, where they felt indispensable in a totally different way. In fact, now they were not only fulfilling their role as a mother, a wife or a daughter, but also being a financially spoken independent woman, who could satisfy her own need and desires.

However, despite the positive effects of their working life, their new employment created problems with their husbands, who could not stand seeing their becoming self-confident. Consequently, for most of the women it ended up with a separation, while others found a way of accommodating. In either way, the women will fiercely fight for their right to work even once back in Syria and they will not give up their new independence.

The movie screening was followed by a lively discussion with the audience about gender roles in the Middle East in general and in Syria in particular. 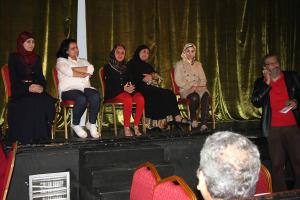 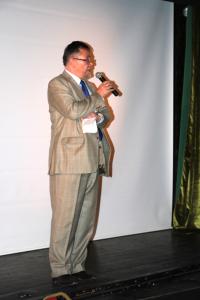 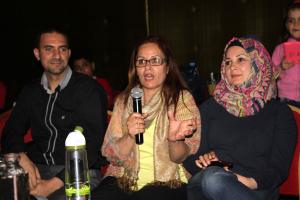 The movie screening was followed by a lively discussion