The Konrad-Adenauer-Stiftung Ramallah conducts in cooperation with the Palestinian Center for Policy and Survey Research (PSR) four times a year Opinion Polls in the Westbank and in the Gaza Strip, which ask about the daily life, political views and the future of the Palestinian Territories. The newest Poll was conducted one month after the end of the recent Gaza War.
30. September 2014 Bestellinformationen

(PSR) in the West Bank and the Gaza Strip between 25-27 September 2014. The period before the poll

armed confrontations in the Gaza Strip. But the reconciliation government failed to operate in the Gaza

Strip during the period of war or ceasefire, and Fatah and Hamas exchanged accusations over who was

responsible for that failure. The period of the fieldwork witnessed improvement in the Fatah-Hamas

relations due to progress in reconciliation follow up talks in Cairo. It also witnessed Palestinian renewed

activities at the UN with President Abbas delivering a speech at the UN General Assembly. This press

internal balance of power, and others. Total size of the sample is 1200 adults interviewed face to face in

This post-war poll was conducted one month after the end of the war in the Gaza Strip. This report

poll which was conducted a month ago, immediately after the war end. Findings show a drop in

satisfaction with the achievements of the war, probably due to the continued siege and blockade of the

Gaza Strip. A drop was also found in the percentage of those who believed Hamas won the war, in the

percentage of opposition to dissolving armed groups in the Gaza Strip, and in the popularity of Hamas and

Ismail Haniyeh. Findings also show a rise in the popularity of Abbas and Fatah. Support for a third armed

Despite the drop in support for the Islamists, Hamas and Haniyeh remain more popular than Fatah and

Abbas. Moreover, a majority still supports launching rockets against Israel if the siege and the blockade

are not ended. Furthermore, satisfaction with Abbas remains low. Finally, two thirds of the public oppose

with the performance of the reconciliation government. Indeed, a majority supports replacing the

reconciliation government with a national unity government made up of factional leaders and politicians.

Despite all that, a majority wants the reconciliation government to control crossings with Egypt and Israel

and wants it to have control over Gaza’s public sector including those in the security services.

Finally, findings show that a majority of the public has not heard about Abbas’ plan to seek a deadline for

ending Israeli occupation and establishing a Palestinian state. A majority of those who have heard about it

do support it despite the fact that a majority expects the plan to fail.

believe the two sides were losers. In the Gaza Strip, only 58% say Hamas came out a winner.

• Despite that, an overwhelming majority of 80% supports the launching of rockets from the Gaza

Strip at Israel if the siege and blockade are not ended. Support for launching rockets drops in the

justified and 39% say it is unjustified. Among Gazans, belief that it is justified to launch rockets

from populated areas drops to 48% while increasing in the West Bank to 62%.

this poll. In the Gaza Strip opposition to disarming these groups drops to 42%.

• About two thirds (65%) believe that Iran, Turkey and Qatar combined have given the Gaza Strip

during the war; only 7% believe Egypt too has contributed to that.

• Moreover, only 21% describe Egypt’s role in the ceasefire negotiations as positive while a

majority of 57% describe it as negative.

provided to respondents, 30% said it should be Israel, 24% said donor countries, 23% said Arab

countries, 10% said Palestinian taxpayers, and 10% said Hamas. When only two options were

provided, 50% said Palestinian taxpayers should finance the reconstruction and 19% selected

• If new presidential elections are held today and only two were nominated, Ismail Haniyeh and

Mahmoud Abbas, the former would win a majority of 55% (compared to 61% a month ago) and

the latter 38% (compared to 32% a month ago). Votes for Abbas and Haniyeh are close in the

Gaza Strip with the former receiving 47% and the latter 50%. In the West Bank, Abbas receives

• Level of satisfaction with the performance of Abbas stays as it was a month ago at 39%.

Satisfaction with Abbas stood at 50% before the Gaza war.

• If presidential elections were between Marwan Barghouti and Haniyeh, the former would receive

48% and the latter would receive 46% of the participants’ votes. A month ago, Barghouti received

45% and Haniyeh 49%. Before the Gaza War Barghouti received the support of 58% and Haniyeh

• If presidential elections were between three: Mahmud Abbas, Marwan Barghouti and Ismail

• If new legislative elections were held today with the participation of all factions, 72% say they

Strip stands in this poll at 40% and for Fatah at 39%. In the West Bank vote for Hamas stands at

38% and Fatah at 33%. These findings indicate a significant drop in Hamas’ popularity in the

West Bank compared to the findings a month ago when it stood at 47%. They also indicate a

significant rise in Fatah’s popularity in the West Bank from 27% to 33% during the same period.

• A majority of 69% wants elections to take place within few to six months from today, 11% want

them to take place after a year or more, and 15% do not want elections.

to 20% a month ago and 24% three months ago. Positive evaluation of conditions in the West

poll. Three months ago, before the Gaza war, the percentage of safety and security in the Gaza

Strip stood at 64%. In the West Bank perception of safety and security remains unchanged

• Perception of corruption in PA institutions stands at 78% compared to 81% three months ago.

freedom in the Gaza Strip.

Bank without fear. By contrast, a larger percentage of 35% say people in the Gaza Strip can

criticize the authorities in Gaza without fear.

(4) The reconciliation government and its role in Gaza after the war:

to 36% in this poll. Dissatisfaction rises from 46% to 54%. It is worth mentioning that three

months ago, right after its establishment, 61% had confidence in the reconciliation government.

• Indeed, 57% prefer to get rid of the reconciliation government and form a unity government in

which leaders and politicians from all major factions would participate; 35% oppose such a step

and prefer to keep the reconciliation government.

reconciliation government in charge of the Rafah crossing, but 37% prefer to keep it under

Hamas’ control. The same applies to the crossings with Israel with 52% (63% in the Gaza Strip

and 34% want it placed in the hands of Hamas.

this claim. But the belief that Hamas was responsible for hindering the functioning of the

the head of the reconciliation government.

• In light of the dissatisfaction with the performance of the reconciliation government, 52% believe

accomplishment. Three months ago, right after the formation of the reconciliation government,

50% said the PA was an accomplishment and 45% said it was a burden.

of Gaza security sector who worked in the past under Hamas government; 29% disagree with that,

wanting instead to keep these employees under Hamas’ control.

• Nonetheless, 68% agree with Hamas’ demand that security and police should remain under its

control during the next 6 months, up until the elections; 28% disagree with that.

deadline for ending occupation and building a state. Among those who have heard about the plan

supported it and 50% opposed it.

Palestinian state: 44% believe that armed confrontation is the most effective means; 29% believe

negotiation is the best means, and 23% believe that popular non-violent resistance is the most

effective route to statehood. A month ago, 53% said armed confrontations were the most effective

36% think it is still practical. Similarly, 72% believe that the chances for establishing a Palestinian

state next to the state of Israel in the next five years are slim or non-existent. Despite that, only

existing agreements with Israel. A month ago, 54% supported this position and 40% opposed it.

identical number opposed to it. But a majority of 56% is opposed to recognition of Israel as a

Jewish state while 41% support this recognition.

resistance. The public is divided equally over a return to armed intifada; a month ago 60%

supported this alternative, but three months ago support did not exceed 41%. Findings show also

that a majority of 53% is opposed to the dissolution of the PA while 44% support it.

occupation but 42% disagree with that.

• By contrast, a larger majority of 81% favors Hamas way of resisting occupation. Support for

• Furthermore, 63% favor the transfer of Hamas’ armed approach to the West Bank and 34%

oppose that. One month ago, support for this transfer stood at 72%.

• In this regard, only 30% support the merging of Hamas’ al Qassam Brigades into the PA’s

Jerusalem as its capital. By contrast, 28% believe the first most vital goal should be to obtain the

right of return of refugees to their 1948 towns and villages, 12% believe that it should be to build

a pious or moral individual and a religious society, one that applies all Islamic teachings, and 10%

respects freedoms and rights of Palestinians.

and settlement activities in the eyes of 30% of the public, while 26% say it is the spread of

poverty and unemployment; 22% believe the most serious problem is corruption in some public

institutions, and 18% believe it is the siege of the Gaza Strip and the closure of its crossings.

This PSR Poll has been conducted with the support of the Konrad Adenauer Stiftung in Ramallah. 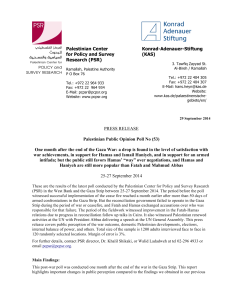