The concept of integration plays an essential role in German state theory. In her article Homogenous People – on the Postulates of Homogeneity and Integration, Prof. Gertrude Lübbe-Wolff addresses the question of whether the homogeneity of a population is a precondition for the establishment of a democratic state. Her article examines this question and its significance for integration policies.
7. Dezember 2020 Bestellinformationen

Referring back to the “Maastricht-Decision” of the German Federal Constitutional Court, Lübbe-Wolff points out that the court only vaguely mentions the principle of relative homogeneity that would connect the state and its people.

After shedding light and comparing the concepts of homogeneity developed by Herman Heller, Carl Schmitt and Hans Kelsen developed around the time of the Weimarer Republic, Prof. Lübbe-Wolff describes how the multi-ethnic state of Habsburg Austria has played a central and revealing role in political theories and everyday beliefs on the subject. For a long time, Austria was considered indeed as the epitome of the problem of national inhomogeneity. However, taking into consideration opposing attitudes on the nationality conflicts in Habsburg Austria and other similar conflicts, she concludes that general discussions on the necessity of a certain homogeneity seem either false or aseptic.

They seem to be false if they impose a very specific and identifiable form of homogeneity - be it the commonality of ethnicity, language, religion, culture – as the world is full of counterexamples of states, including democracies, in which one or more of these commonalities are missing.

They seem to be aseptic, moreover, if they rely on the necessity of some vague common ground such as ethnicity, language, religion, culture, history, common beliefs or interests. Their presence or absence could not be verified independently of the political success or failure it is intended to explain.

Prof. Lübbe-Wolff depicts moreover, that even within social sciences the idea of homogeneity of individuals, i.e. the social likeness of the population of an area as prerequisite for democratic decision-making, has been discarded in the middle of the 19th century. Sociologists such as Herbert Spencer developed the theory that all progress in nature and society is due to a development from homogeneous to heterogeneous. Emile Durkheim and Georg Simmel postulated furthermore that differentiation, in particular, can strengthen social cohesion and expand the possibilities of social unit formation.

At the same time, the inhomogeneity of differentiated societies also entails challenges. The inequality of objective life situations and the interests and cultures that are constructed on the basis of them produces differences in normative expectations and different opinions about the moral foundations that are not to be touched without threatening the establishment of a society.

The author stresses in this regard that democracy is characterized by the peaceful and just management of conflicts of interest, which are precisely the expression and manifestation of largely irreversible inhomogeneity. In her opinion, homogeneity postulates would be of little help in this regard. But equally unhelpful would be the common opposite position, which pretends, that inhomogeneity doesn’t come without problems. Although there are successful examples of heterogeneous societies such as the United States and Switzerland, we should also keep in mind an infinite spectrum of sometimes smaller, sometimes larger and more threating problems and difficulties, including historic examples of civil wars and genocide.

Prof. Lübbe- Wolff concludes that instead of postulating homogeneity or naively denying conflict potential, we should ask ourselves what are the best preconditions within the political entities for a peaceful coexistence and prosperous cooperation with a given inhomogeneity. Modern constitutions could be described as answers to this question - as integration programs for differentiated, inherently inhomogeneous societies. 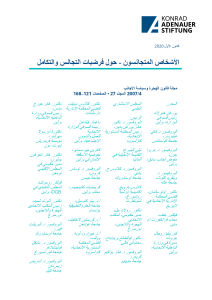 Translation Homogenous People - on the Postulates of Honogeneity and Integration.pdf
Herunterladen
Ansprechpartner