The Constitutional Crisis of the EU and its crisis

Cooperation of KAS Greece with the Law Faculty of the Democritus University of Thrace
August 24, 2018 Ordering Information 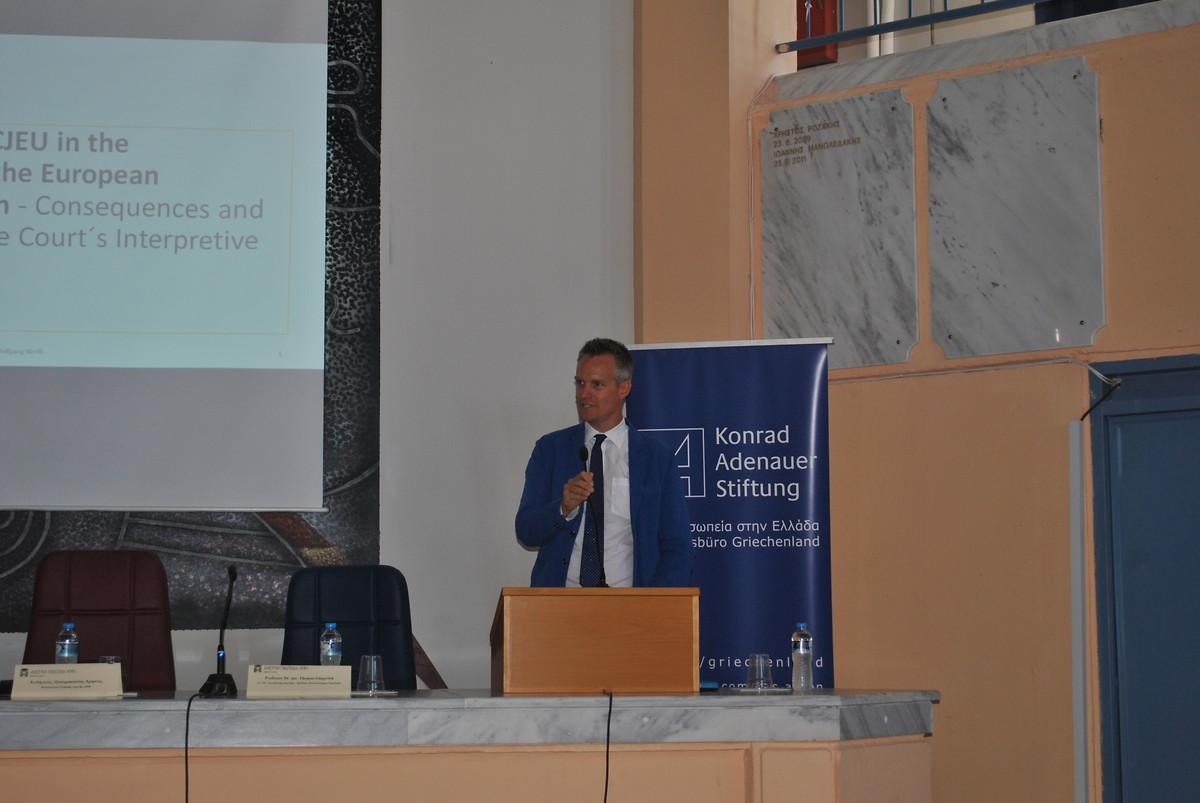 Henri Bohnet, Director for Greece and Cyprus of the Konrad-Adenauer-Stiftung is making a welcome remark at the conference. 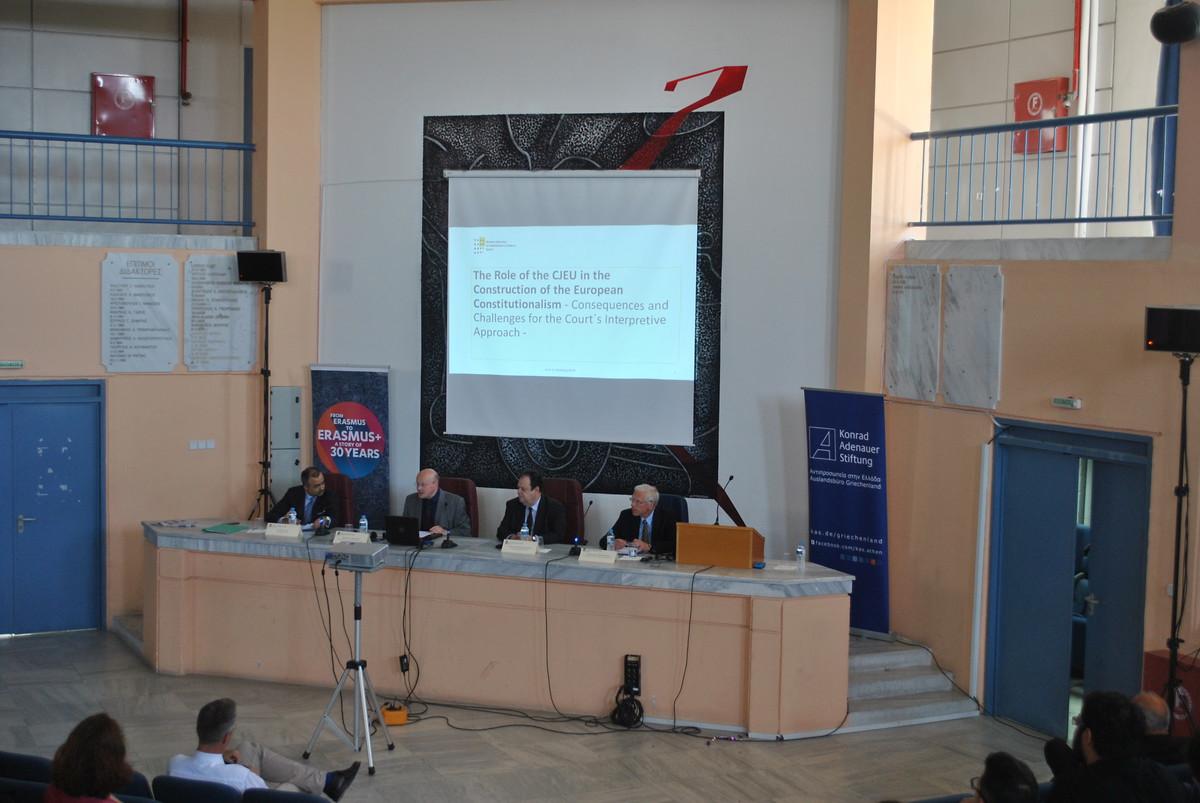 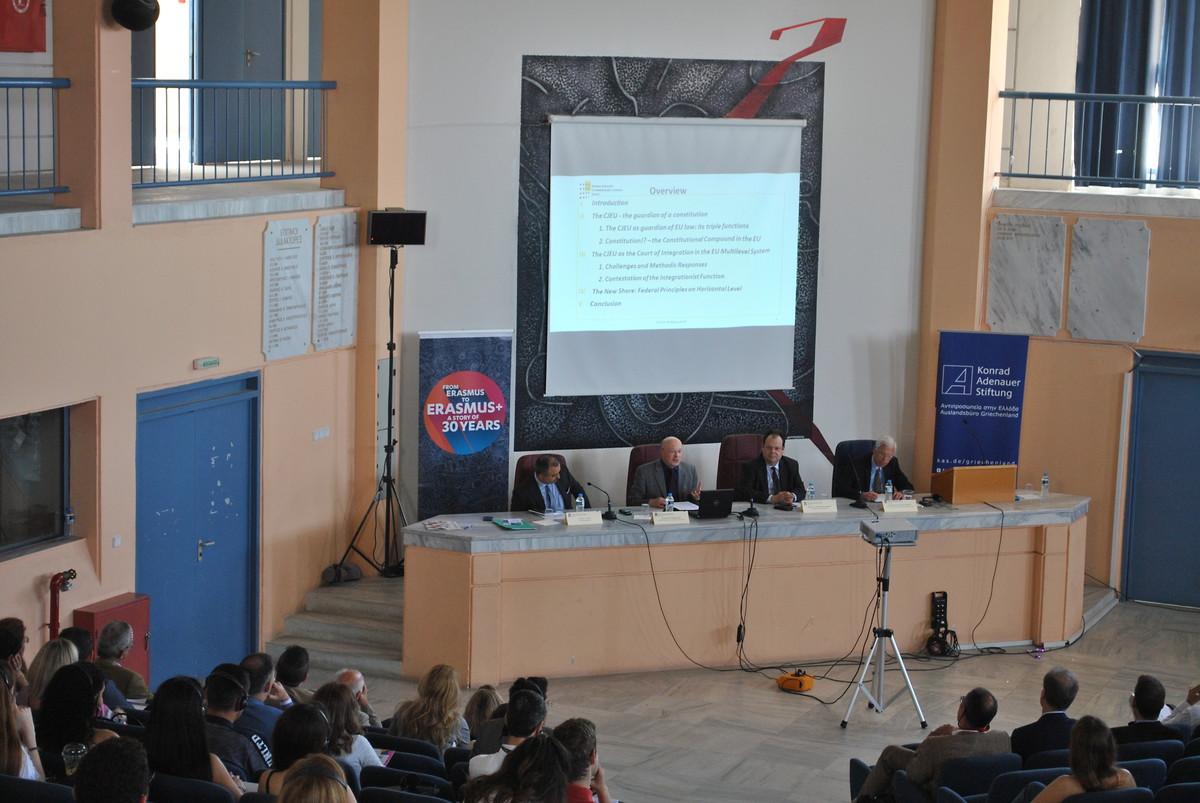 More than 150 people attended the conference at the premises of the Law Faculty of the Democritus University of Thrace in Komotini. 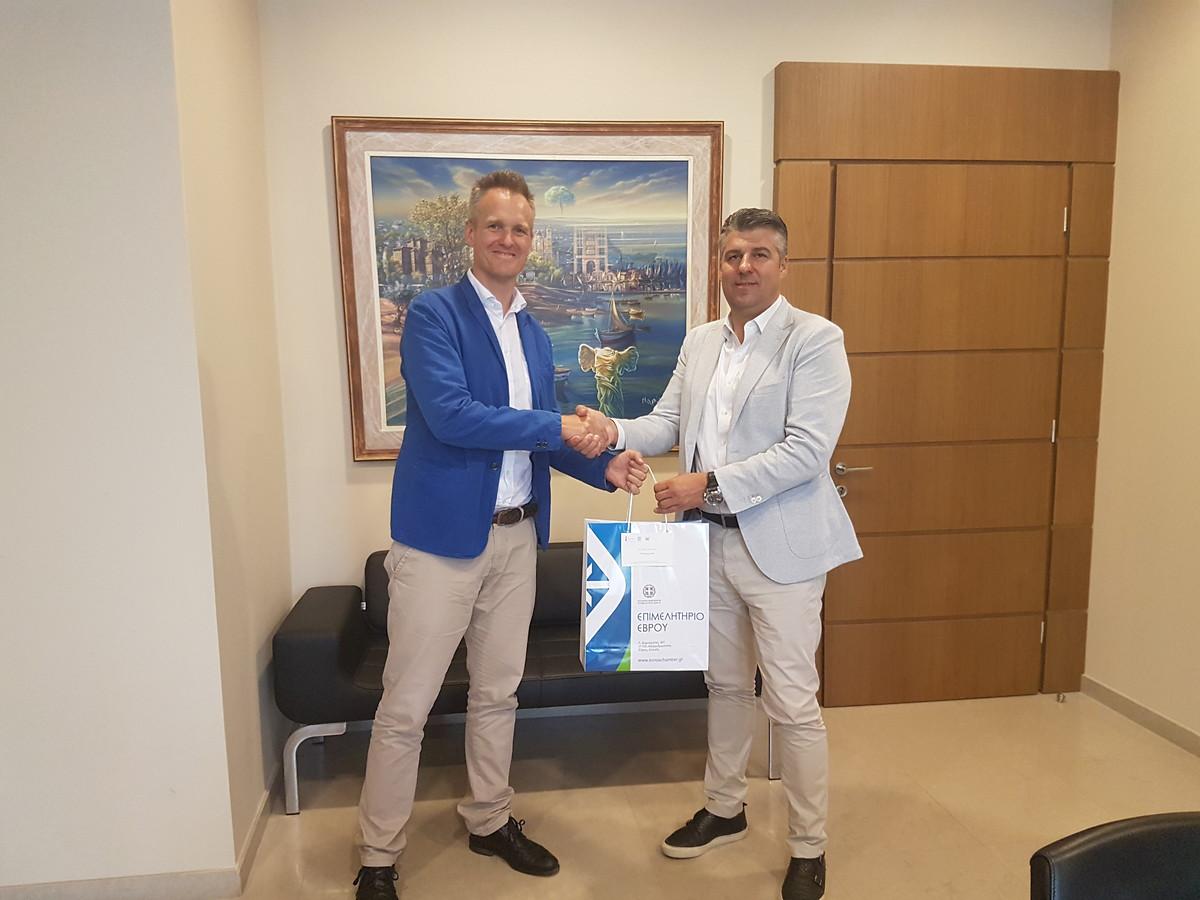 On the occasion of the conference, the delegation of KAS had the opportunity to meet with local actors such as the President of the Chamber of Commerce of Evros, Christodoulos Topsidis.

Konrad-Adenauer-Stiftung, Greece Office organized in Komotini on 23 May 2018 a conference with the title "The Constitutional Character of the EU and its Crisis" in cooperation with the Jean Monnet Chair of the Law Faculty of the Democritus University of Thrace. Prominent professors from the fields of legal and political studies from Greece and Germany exchanged views on different aspects of the evolution of the constitutional character of the European integration, but also discussed about the challenges that the European Union is nowadays facing.

The conference consisted of three thematic circles, thus covering a series of questions pertaining the legal character of the EU.

The presentations of the first circle evolved around the creation of the constitutional structure of the Union. Prof. Dr. Wolfgang Weiß, from the Deutsche Universität für Verwaltungswissenschaften Speyer presented the contribution of the rulings of the Court of the European Union to the birth and evolution of the European constitutionalism, whereas Ass. Prof. Antonis Metaxas, from the National and Kapodistrian University of Athens dedicated his initial statement on the notions of “Crisis” and “State of Emergency” and their effect on EU Law. The first panel concluded Prof. Dr. jur. Thomas Giegerich, Director of Europa-Institut, Saarland University by analyzing the conundrum between federalist and anti-federalist forces in regard to the legal framework of the protection of Human Rights on EU level.

On the basis of these findings, the issue of the modern challenges to the EU was approached. Prof. Asterios Pliakos, from the Athens University of Economics and Business pointed out how the axiom the State of Law is being threatened and which measures are being taken by the ECJ in order to defend and further evolve it. The current matters of the effects of the economic crisis especially in the European South on the citizenship and the rise of Euroscepticism in a number of EU-members were discussed by Prof. Vasilis Chatzopoulos, from the Panteion University of Athens and Assoc. Prof. Susanna Verney, from the University of Athens respectively. Of course Brexit could not be left outside the discussion, and it served as a basis for the thoughts shared by Ass. Prof. Manolis Perrakis, also from the University of Athens.

The last part of the conference was dedicated to need for more legitimation for the EU. Lect. Stelios-Ioannis Koutnatzis, from the Democritus University of Thrace put forward important arguments regarding the relations between the national constitutional laws and the law of the European Union and in direct connection to that, Lect. Kyriakos Papanikolaou, from the same University elaborated on the role of national judges and other judicial organs. The last points were made by Assoc. Prof. Lina Papadopoulou, from the Aristotle University of Thessaloniki on the effects of the debt crisis of the States in relation to a need for more democracy in the EU.

More than 150 people attended the conference and showed their keen interest via the vivid discussion in the end of each panel.

The Constitutional Character of the EU and its Crisis