Within the approximately 40,000-member Chechen communities in Germany, several security-related developments are currently taking place. This publication addresses this trend. Starting with a description of the Chechen communities in Germany and Europe, it highlights various security-relevant aspects in order to contribute to a better understanding of these developments.
November 10, 2022 Ordering Information

In addition to increasing isolation, a generational conflict is also currently shaping the Chechen communities. In the shadow of this conflict, organized crime actors are positioning themselves just as much as Salafists and the Kadyrov regime in Grozny. Salafist influencers are particularly able to gain followers and shape discourse among young Chechens. In parallel with these developments, Russia and Chechnya are making increasingly aggressive attempts to exert influence. The Kadyrov regime is pursuing a dual strategy of reconstructing Chechen identity while at the same time resorting to massive political violence and even murder. This violent diaspora policy further inhibits the integration and democratic opening of Chechen communities.

In the face of the growing isolation of significant parts of the Chechen communities in Germany, the rise of Salafist actors, and Kadyrov's violent diaspora policy, both security policy and integration policy countermeasures are necessary. Last but not least, the Russian war of aggression against Ukraine illustrates that the potential for conflict between the various Chechen factions can also affect the Chechen diaspora communities.

Read the entire analysis: „Sicherheitsrelevante Entwicklungen in den tschetschenischen Gemeinschaften in Deutschland“ here as a PDF. 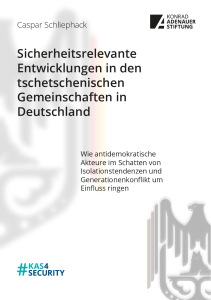