The UK and Germany: International Affairs and the Search for a Global Role - Foundation Office United Kingdom and Ireland

The UK and Germany: International Affairs and the Search for a Global Role

Second Seminar in the 'UK and Germany: Contrasts and Similarities' series

Throughout this year, the Federal Trust, the Konrad-Adenauer-Stiftung and the Global Policy Institute will be jointly organising a series of panel discussions that will assess the different approaches of the UK and Germany to important policy issues.
April 24, 2014 Ordering Information 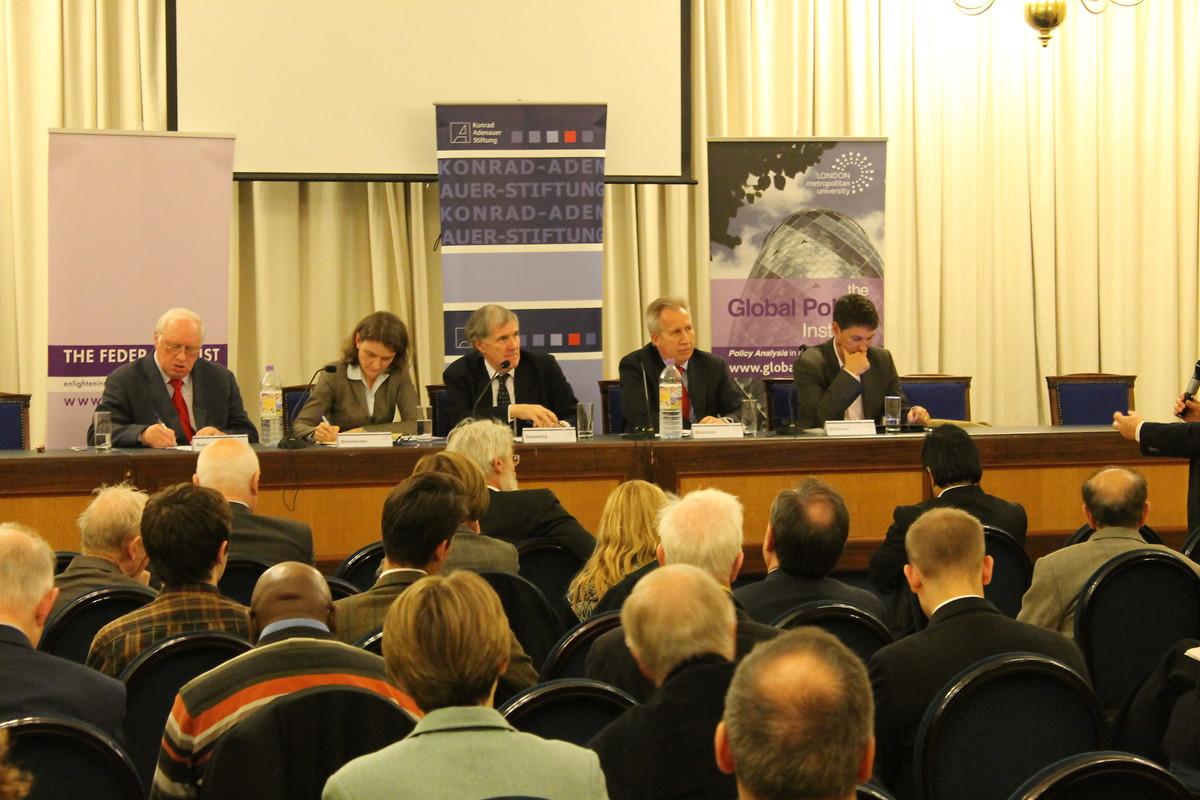 The second of these discussions focussed on the different global roles that the UK and Germany seek for themselves, taking each in turn and also providing a European context. For the UK, this is a long-running debate that takes in relations with Europe, the ‘special relationship’ with the USA, and the historical search for a post-imperial role. For Germany, a global role has risen up the agenda, not just with events in Ukraine, but also with the recent speech from President Joachim Gauck in Munich which called for Germany to take ‘more responsibility’ in international affairs.

With approximately 70 attendees in the audience, the event began at 5pm with welcome remarks from Hans-Hartwig Blomeier, the Director of the KAS London office, and Brendan Donnelly, Director of the Federal Trust. The first speaker was Professor Richard Whitman, who outlined the evolution of the EU's approach towards issues of foreign policy. This process has included the struggle to clearly identify and pursue objectives on a European level, the changing role of the USA as it withdraws from Europe and 'pivots' towards Asia, and the challenges posed in the European neighbourhood (for example the 'Arab Spring', events in Libya, Syria, and most recently Ukraine). Equally there has been the need to incorporate the committment to NATO, and the challenge of achieving consensus from 28 different national perspectives.

Professor Stephen Haseler provided an overview of the UK's historical search for a global role following the second world war and the decolonisation movement that brought an end to the British empire. The central plank of UK thinking has been the special relationship with the United States, often prioritised over co-operation with European partners. This position has increasingly been contested, not just in the aftermath of the Iraq war, but as part of a more general post-Cold War realignment of geopolitical positioning and power. As the UK continues to consider the posssibility of an EU exit, there a significant questions about what role in the world the UK can play, given the shift of American focus, and the integration of Europe on the other.

Dr Daniela Schwarzer made the final presentation, and discussed the current debate within Germany about the viability of increasing German participation and leadership in international affairs. This debate is linked to the increased scrutiny of German decision-making on many levels that has resulted from the leading role that Germany has played in responding to the crisis in the Eurozone. Germany has again been prompted into playing a leading European role in a crisis situation in the present dispute in Ukraine with Russia. Such events will continue to fuel a domestic discussion about the extent to which Germany is willing and able to commit itself to involvement in global affairs, including military decisions, on a greater scale than previously sanctioned by both the public and the government.