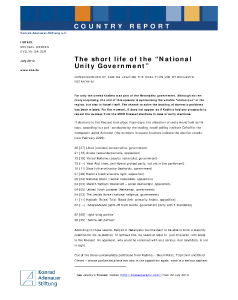 THE SHORT LIFE OF THE “NATIONAL UNITY GOVERNMENT”

CONSEQUENCES OF KADIMA LEAVING THE COALITION LED BY BENJAMIN NETANYAHU

Only ten weeks did Kadima participate in the Netanyahu government. The – not entirely surprising – end of this episode stands symbolically for the volatile “status quo” in the region, but also in Israel itself. The possibility to solve the backlog of domestic problems has been missed. For the moment, it does not appear as if Kadima had any pros-pects to tie up with the success from the 2009 Knesset elections in case of early elec-tions. 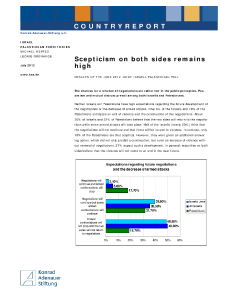 The chances for a renewal of negotiations are rather low in the public perception. Pessimism and mutual distrust prevail among both Israelis and Palestinians. 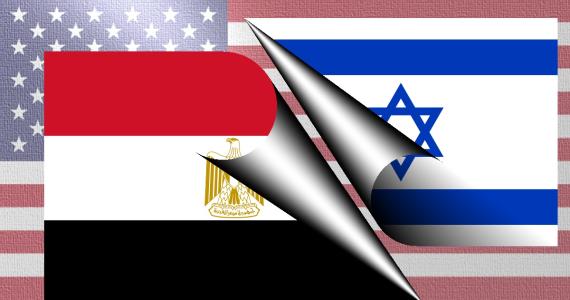 Israel also commemorates intensely the victims of the September 11 terror attacks of New York, Washington and Shanksville, Pennsylvania. At the same time there are great worries regarding the last week, which was marked by increasing tensions with Turkey and which ended with a shock: the storming of the Israeli embassy in Cairo by a fanaticized mob. 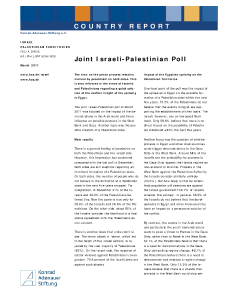 The view on the peace process remains marked by pessimism on both sides. This is also reflected in the views of Israelis and Palestinians regarding a quick solution of the conflict in light of the uprising in Egypt. 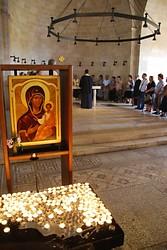 A Complex Question of Identity

Galilee and Jerusalem, the heartlands of the New Testament, are today part of the State of Israel. Christians only make up a small proportion of the total Israeli population. As a percentage of this total, their proportion is sinking, but in real terms their numbers are growing. Christians in Israel are mainly Arabs who are Israeli citizens, which gives them complex identity issues and different points of reference. Although their religious freedom is guaranteed, local Christian Arabs are faced with two challenges relating to their situation as a dual minority.

Pessimism among Israelis and Palestinians regarding the prospects for a settlement and a Palestinian state in the next few years, but majorities on both sides support a two-state solution. 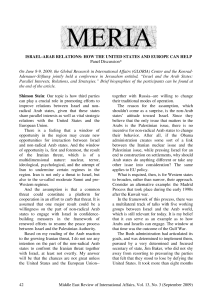 Israel-Arab Relations: How the United States and Europe Can Help

The results of a panel discussion on “Israel and the Arab States: Parallel Interests, Relations, and Strategies” which took place in June 2009 and was organized in cooperation between the Konrad-Adenauer-Stiftung and the Global Research in International Affairs (GLORIA) Center, is now published in MERIA. The panel discussion is of particular relevance in light of the recent intensified efforts of President Obama to advance the Peace Process in the Middle East.

Protection of Human Rights in Israel

In Cooperation with the Konrad-Adenauer-Stiftung and the Israel Association of Public Law, the Minerva Center for Human Rights at the Hebrew University of Jerusalem held a symposium on “The Protection of Human Rights in Israel”. This gathering marked the recent publication of the “Dorner Book”, a collection of articles on judicial issues that was published in honor of Justice Dorner. 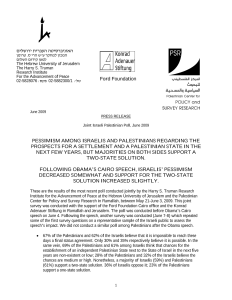 Pessimism among Israelis and Palestinians regarding the prospects for a settlement and a Palestinian state in the next few years, but majorities on both sides support a two-state solution. Following Obama’s Cairo speech, Israelis’ pessimism decreased somewhat and support for the two-state solution increased slightly. 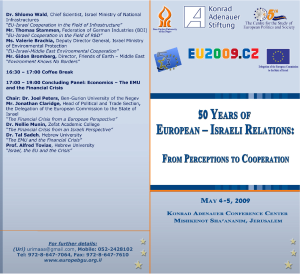 From Perceptions to Cooperation