The Konrad-Adenauer-Stiftung (KAS) Jerusalem office organized on March 21st 2011 in cooperation with the Moshe Dayan Center for Middle Eastern and Africa Studies a lecture within the framework of KAS’s programs at Tel Aviv University. Professor Oded Haklai, an expert for political strategy of the Palestinian Arab minority in Israel, was invited to speak about the roots of Palestinian nationalism. He also presented an outlook about future developments. Dr. Paul Rivlin moderated the event.
March 24, 2011 Ordering Information

In his lecture Prof. Haklai described the increase of Palestinian nationalism during the past decades and a surge of Islamic movements within Arab minorities that represent 20 percent of the Israeli population. He highlighted two parallel developments: On the one hand political demands of the Arab Israeli population, motivated by Palestinian nationalism. On the other hand the adoption of typical Israeli patterns of behavior in political culture of the Arab minority.

With the help of the so called “Future Vision Documents”, Prof. Haklai showed how growing nationalism manifests itself within the Arab minority. The mentioned documents are a joint publication by different Arab intellectuals from Israel and were released in 2006. They demand that the State of Israel should divest itself of its Jewish character to become one state for all citizens. Along with this demand, it is stated that the Arab minority should be officially recognized as an independent entity with its own culture and laws. The documents categorize the Arab minority as the indigenous population of the land, being violently torn apart from its fellow Palestinian citizens by the founding of the State of Israel. The Jewish state is only seen as a result of a process of colonization; a Jewish connection to the land is not mentioned. Israel is being rather portrayed as an extension of the West. Additionally, the Jewish character is considered as bad. The adopted portrayal of the conflict picks up, in accordance with Prof. Haklai inconsiderately the Palestinian narrative and neglects Arab Palestinian responsibility. A lot of Israelis perceive the documents’ demand for the removal of all Jewish symbols as threatening and consider the stated challenge for the Jewish state as unacceptable.

Another important development emphasized by Prof. Haklai is the increase in political and civil participation in the Arab society. It is especially obvious according to Prof. Haklai that Arab parties are being founded based on ethnic Arab criteria and hence appeal to their electorate as one ethnic group. This development stands contrary to the Palestinian Arab minority during the 1960s and 1970 that worked together with Jewish Israelis for instance in the communist party. Furthermore one could observe that political as well as civil groups call more often upon the High Court in Israel to control institutions like the Knesset or the government. Dr. Rivlin mentioned in this regard the use of Israeli media through the Arab minority to spread their messages. These developments basically reflect Israeli democracy according to Prof. Haklai. Also in the Israeli party system one can observe an increasing approach towards societal niches. This boosts polarization of political parties, disputing about the grace of their electorate. This development within the sector of the Arab minority follows these patterns similarly with other mobilization processes in Israel. Prof. Haklai assesses this positively, because it shows that Arab groups follow and acknowledge democratic rules in Israel, even though they insist that Israel is not a democracy. 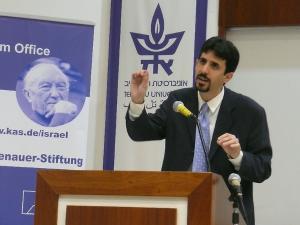