The Challenge of Faith and Religious Leadership in Secular Society

Under the participation of high-ranking religious leaders of the Vatican and Israel, the 10th meeting of the Bilateral Commission, took place at the Konrad Adenauer Conference Center, Mishkenot Sha'ananim, Jerusalem, from 29 to 31 March 2011. The Commission discussed “The Challenge of Faith and Religious Leadership in Secular Society”.
March 30, 2011 Ordering Information

The delegations opened the meeting with a discussion on the role of religion in modern society. Especially in these days of uncertainty, the Middle East is in need of orientation. Religion can provide important guidance in social life. The Latin Patriarchate Fuad Twal reported that the current year was named “Year of the Bible” and that through a project called “five minutes with the bible” especially young people should be inspired to study the bible on daily basis. The participants discussed the possibilities of modern systems of communication such as Facebook to promote religious values. In this context Rabbi Oded Wiener gave an account on an initiative called “Kosher Internet”. The participants concluded that all in all a new interest in religion can be observed which is, however, not mirrored in an appropriate way by the mostly secular media. This new interest is a chance to renew religion as an element of guidance in society.

Accordingly the Bilateral Commission represents the latest institutional stage in the historic transformation of the Catholic-Jewish relations since the Second Vatican Council and the promulgation of the historic document Nostra Aetate, which revolutionized Catholic teaching in relation to Jews, Judaism and Israel.

During Pope Benedict XVI's pilgrimage to the Holy Land in 2009 and also at his visit to the synagogue in Rome a year later, he most particularly underscored this Bilateral Commission as a testimony to the great advancement of Catholic-Jewish relations.

On the occasion of Benedict XVI's meeting with the Chief Rabbis and their colleagues, the Konrad-Adenauer-Stiftung published the concluding statements of the bilateral commission's meetings that had so far taken place.

These regular deliberations are held in a spirit of mutual respect for the separate integrity of each of the two faith traditions; they also seek to focus on issues of mutual concern and responsibility as well as to promote religious values in contemporary society, especially peace and reconciliation.

The Role of Religious Leadership in Secular Society 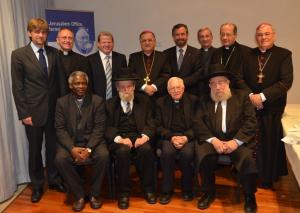