In a joint conference together with The Minerva Center for Human Rights in the Hebrew University of Jerusalem, the Konrad Adenauer Stiftung hosted legal experts from Europe and the Middle East that examined the the existing legal gaps on refugee international law and discussed possible legal and policy responses
July 18, 2017 Ordering Information

Prof. Tomer Broude, Academic Director of the Minerva Center for Human Rights welcomed the participants of the conference and underscored the high topicality and value of the conference. He explained that although we have seen changes of immigration and asylum seeking patterns over the years, only little progress has been made in legal regulation. The question which needs to be asked is how many refugees do actually get the proper protection that they deserve today? Given that governmental administration has an impact on lives; it cannot be underestimated how much the legal framework can be considered the key to either success or failure.

Mr. Stas Linchevsky, from the Konrad-Adenauer-Stiftung, introduced the Konrad-Adenauer-Stiftung as an important think-tank and supporter of democracy, civil society and particularly the Rule of Law. Within the scope of the Rule of Law Programs, the foundation concentrates on various subject areas. Germany, as such, has been assigned an exceptional role in the refugee crisis and therefore steadily seeks for expertise and new impulses, while the Konrad-Adenauer-Stiftung works on developing those new concepts. The importance of examining the legal frameworks lies in the fact that we need to examine what we have at the moment in order to be better prepared for what will come next and for how to deal with it. This conference, so he said, will therefore seek to understand what are the gaps in the international law with regard to the situation in the last few years? And what is most needed by this point in the Middle East as well as in Europe?

"Refugee Protection and Burden-sharing in the European Union"

Prof. Rainer Bauböck from the European University Institute, in his opening lecture, spoke on “Refugee Protection and Burden-sharing in the European Union”. He explained different aspects of “duty”, especially concentrating on the moral and humanitarian duty of immediate assistance in the case of emergency. He brought up the question of “How do we determine how many refugees can each country take?” Indeed, the European Union could provide nearly optimal conditions for the duty to help in the refugee crisis, but cannot exploit its potential. He then presented a version for a future, in which refugee quotas could be traded in a common market in a “coalition of the willing”, considering integration capacities and cultural background of refugees in order to facilitate and improve current administration. He introduced the principle of preference trading, which means that states may pay money to other states to take refugees and claimed that it’s fair if states trade quotas for funding. He also discussed some enforcement dilemmas, which might come up, such as “ How would states join this regime without knowing how much refugees would be assigned?” Concluding, Prof. Bauböck made clear that according to him the European Union, over discussions about sovereignty and the enforcement dilemma, failed to systematically and efficiently make the best out of the given situation.

The refugee crisis has provoked multiple answers in different countries. As chair Dr. Tal Dingott-Alkopher from the Hebrew University in Jerusalem highlighted, the special circumstances in every country highly depend on their political environment and must therefore be regarded separately.

Mr. Amit Sen from the UNHCR Bureau for the Middle East and North Africa in Amman gave an overview on forced migration and statelessness in the region. He emphasized how UNHCR is more and more responsible for stateless people in general, including also non-refugees. Furthermore, mass displacement of stateless populations as refugees and massive population movements are a particularly Asian and African issue. Statelessness often is a cause as well as consequence of human trafficking, given that statelessness cannot use common channels of travelling. Mr. Sen particularly raised as an example the situation in Syria, as war and gaps in law lead to a high number of stateless people. Since statelessness provokes serious risks for life in each stage of life, but particularly for children, he underlined the importance of UNHCR’s work in the region.

Dr. Dmitris Skleparis from the University of Glasgow, talked on “Greece’s Response to the ‘European Refugee Crisis’: Two Years Later”. He looked back on the change in government in 2015 and the high hopes that were pronounced, but also stated how they could not lift up to the expectations. Indeed, the not ending stream of arrivals, difficult economic situation and the lack of right expertise were mainly overwhelming to the Greek new government. He moreover accused the Greek government of purposely not doing enough to improve the general situation of refugees in order to pressure other European countries and local refugees.

Dr. Lami Bertan Tokuzlu from the Istanbul Bilgi University presented the impact of the Syrian refugee influx on the Turkish asylum law and institutions. He noted an erosion of norms in the Turkish law system, seeing that Turkey does not accomplish to develop their laws regarding the issue. The 2005 laws could not be reformed in time, what he sees as a missed chance. During the enclosure of the Balkan-route, Turkey’s role in the EU-amendment became essential, still, the lack of common data and vital cooperation continuously weakens the deal. Also, Dr. Tokuzulu criticized the UNHCR for not cooperating with regime-critical actors in Turkey since the political situation has become more challenging. He eventually pointed out that European politicians should not keep their eyes closed regarding the political situation in Turkey, as Turkish people can become refugees as well and thereby undermine the EU deal with Turkey.

The European Union sees itself as a community of countries, led by humanitarian ideals and democratic institutions. The refugee crisis otherwise uncovered gaps in laws and disagreement, as chair Ms. Lior Birger from the Hebrew University in Jerusalem introduced.

"The Common European Asylum System in Crisis: A Case Study in the Perversity of Incentives in Refugee Protection Law"

Prof. Rosemary Byrne from the Trinity College in Dublin underlined the crisis first of all being a crisis of perception, more often framed into a crisis caused by refugees. Indeed, as she explained, the main laws during the crisis had been implemented long before; as a result, those so-called “good-weather-laws” could not satisfyingly handle the situation. After all, the common European asylum system is a small body of legislation. The new laws were an improvement, however, still states rather accept being sued and having to pay penalty sums instead of taking quota refugees, which makes the system in general highly dysfunctional. In the end, Prof. Byrne emphasized the need for more public solidarity.

“When Policies Travel but Checks and Balances Don’t: The Diffusion of Restrictive Refugee Policies among Western Countries”

Ms. Shani Bar-Tuvia from the Hebrew University in Jerusalem spoke on “When Policies Travel but Checks and Balances Don’t: The Diffusion of Restrictive Refugee Policies among Western Countries”. She focused on asylum laws that came from European countries to Israel and were implemented as a new policy; adapted by Israel. Overall, asylum policy adapted by Israel has a greater and more restrictive outcome in Israel than it had in its country of origin. Ms. Bar-Tuvia gave example of laws concerning push-backs, offshore-processing, voluntary return and so-called “safe third countries”. She concluded by calling for a higher awareness about the problem areas and stressed that saving lives on sea is not enough. Answering to a participant’s question regarding the public opinion and populism, she gave a rather pessimistic outlook, calling it a “lost battle”.

The Bearers of Laws and Policies: A Conversation with an Asylum Seeker and an Asylum Advocate in Israel

Prof. Tomer Broude from the Hebrew University of Jerusalem introduced the final panel of the conference by stressing that behind every law stand numerous refugees. He reminded that this conference, after all, is talking about humans and fates, which must also play a role in theoretical considerations.

Mr. Mehari from the Hebrew University told his story as an asylum seeker coming from Eritrea. Considering himself as a human resource in a developing country, he became a refugee and had to flee to Ethiopia, from where he came to Israel. He highly criticized the poor governmental organization regarding refugees in Israel, where helpful and just governmental policy is lacking. To him, it is a failure how human and refugee rights have fallen into political left-right patterns.

Adv. Ben-Dor explained her point of view on Israeli asylum law. She condemned the current practice of not declaring any asylum seeker a refugee in order to hamper the necessity of certain successions and claims. Israel wants to send a frustrating message to refugees, whereas asylum seekers in Israel have to live under harsh conditions without access to medical aid and uncertainty. Ms. Ben-Dor sees her work as a steady fight against a system, but also a great enrichment, as the trial has a dramatic impact on the asylum seeker’s lives and provides direct contact with human fates. She explained that the supreme court has chosen to intervene on this topic so far only when it felt that the government went too far and violated the constitutional fundamental rights, and not when it came to nuances. According to her, the fact of the matter is that judge is ready to recognize refugees and this will probably not change in the near future. 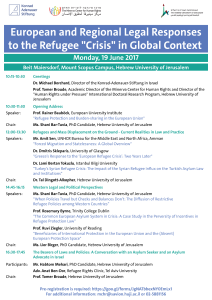 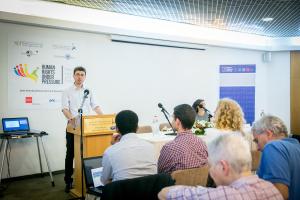 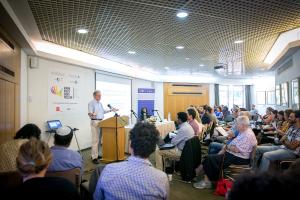 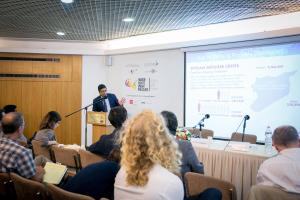 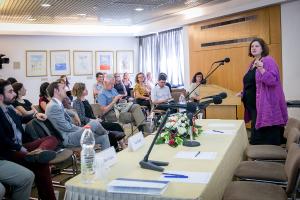 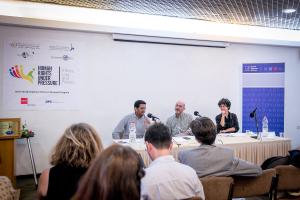