Making Space for Each Other

In cooperation with the Jerusalem Institute for Policy Research the KAS-Office Jerusalem held the 4th session of the joint “Kollek-Adenauer-Program” for creation of shared spaces in Jerusalem. Speaker of this session was Prof. Frank Gaffikin from Queens University, Belfast who gave an insight in his work on urban planning for the development of shared spaces in divided cities such as Belfast.
May 11, 2017 Ordering Information

The head of the KAS-Office Israel, Dr. Michael Borchard, has opened the evening and pointed out in his opening remarks that the namesakes of the program were devoted local politicians; Konrad Adenauer, during the Weimar Republic Mayor of the city of Cologne, as well as Teddy Kollek, the famous Mayor of Jerusalem who acknowledged that “Jerusalem belongs to the world”. Dr. Borchard then went on by stressing the importance of taking a comparative perspective which he illustrated with the well-known example of formerly divided Berlin. The unification of Berlin after 45 years of division has shown that a solution is feasible. Belfast might even serve as a better example when it comes to comparing Jerusalem since Belfast too is divided by a religious cleavage.

Prof. Gaffikin began his lecture by making general remarks on describing a global trend towards urbanization and the growing diversity in cities all over the world. As “the urban is becoming globalized” diversity in cities increases and “difference is coming to more and more places”. In one sense every city is divided, as Prof. Gaffikin put it, for example by wealth, gender or ethnicity. But when talking of “divided cities” in the narrow sense of the word usually cities such as Belfast, Berlin or Nicosia are being associated with the term. They all share in common that division arises around sovereignty.

Next he gave a definition of space; space is a contested concept, as he put it. Space according to him can be conceived as an active agent, it is socially produced, a “dynamic concept”. He then began to illustrate the situation in Belfast; urban planners often ignored divisions even though planning is essential to order space. In the past, he explained, planners in Belfast had often unintentionally even intensified division in the city.

He continued by giving a historic overview of the troublesome relationship between Ireland and Britain which led to the partition lasting till today; Northern Ireland remained British after the revolt of 1916 mainly due to its large protestant majority. Following several decades of violent conflict in 1998 a settlement between the conflicting parties was reached though not being a real peace treaty, as Prof. Gaffikin put it. Although the conflict became less violent, segregation was maintained. An important factor in understanding the situation in Belfast today is demographic change. Once having a protestant majority today 50% of the population in Belfast is Catholic. It is even likely, as he stated, that the Catholic population of Northern Ireland will eventually become the majority. Urban planning in Northern Ireland has therefore been striving to maintain artificially a protestant majority.

When comparing the situation in Israel demographic change may also be a decisive factor as well. Urban planners in Jerusalem share the same motivation as is the case in Northern Ireland, they aim to maintain the character of the capital as a Jewish city; same applies to Israel in general as well, Prof. Gaffikin remarked. Continuing his account on the situation in Belfast he presented 5 typologies of space which can be found in the city. He distinguished between ethnically defined space discernable by so called “peace walls” between Catholic and Protestant neighborhoods. Today there are in Belfast paradoxically even more “peace walls” built than before the settlement of 1998, reinforcing segregation even more.

Furthermore he distinguished between what he called “dead space”, patches of no man’s land found throughout the city predominantly near the “peace walls” and unfit for use. Another spatial type discernible in Belfast according to Prof. Gaffikin is “neutral space”. Originally intended by urban planners as projects for creating shared spaces in town turned out to be more “neutral”, as for example malls, etc. University should by definition serve as an example for “real” shared space open to both communities. But even there, having the possibility to experience co-living he explained that students rather to deliberately stay within their own community and experience segregation. This tendency is predicated by the school system of Northern Ireland; around 93% of pupils go to segregated schools. The last spatial category he distinguished was “cosmopolitan space” inhering in a more international ambience.

The aim of the urban planner should accordingly be to minimize “dead” and “ethnic” space and amplify “shared” and “cosmopolitan” space. In the case of Northern Ireland it is even laid down in the legislation framework of the 1998 settlement. Prof. Gaffikin then went on to present his research on city transformation regarding the creation of shared civic space in Belfast and, more precisely, giving examples of funded projects for transforming “dead” space into shared space. When presenting one example of transforming dead space an interesting finding was that the civic buildings erected in fact served as a “symbolic peace wall” reproducing sectarian geography rather than creating real shared space. He continued by giving further failed examples of projects intended to develop shared space in Belfast like the construction of health centers, which out of the perspective of urban planning again turned out to intensify segregation rather than acting as a means of bonding in divided communities.

Another finding of his concerning shared society principles which Prof. Gaffikin addressed is the general consent of most people to universal principles on an abstract level when asked while when these principles are broken down to particular examples and the implications they pose for enabling the development of shared space most of the people asked will find it problematic to second and to consent them. Sketching up to now a rather negative status quo in Belfast, Prof. Gaffikin continued to present successful housing projects of urban planners, like the re-functioning and refurbishment of an old mill in an interface area of Belfast.

In addition Prof. Gaffikin elaborated on future development in Belfast, in particular on the issue of a shared city not only being about the built environment; the “green environment” too must be considered. For a positive development he therefore proposed a potential “green corridor” connecting several quarters and by that creating shared space. He further proposed that the task of creating such space cannot be tackled by urban planners alone but in the future an interdisciplinary approach incorporating politicians, educationalists, academics, developers, etc. is needed for an integrated effort.

He concluded his lecture by making some remarks on universal principles whose observance in his view may facilitate the development of such space; these include first of all the principle of consent – violence cannot change the minds of people, only the power of persuasion can do so. Secondly adhering to the rule of law is crucial in conflict societies. At the same time he saw the need to revisit multiculturalism in favor of a cross cultural approach connecting societies.

Following the lecture was a Q&A session in which the speaker among other questions was asked if he had experience from his work on Belfast to share when it comes to grass-root projects for community relations work along the 1967 green line in Jerusalem. Prof. Gaffikin pointed out that in Northern Ireland community relations work has been emphasizing more the bonding of the community rather than focusing on gaining bridging capital. When asked if people in divided cities like Jerusalem would strive at all to live in shared areas Prof. Gaffikin instanced the „epidemic of the Ghetto“ in Chicago as an example. The municipality had wanted to tackle the issue for 20 years; today there has been as a matter of fact physical transformation of former Ghettos (by demolishing old structures and building of new affordable housing), but only in part improvements could be made in the area of racial as well as class concentration. All in all he in fact sees a tendency of people of different communities not wishing to live together. 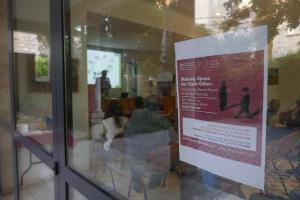 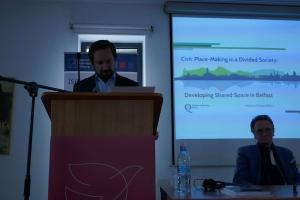 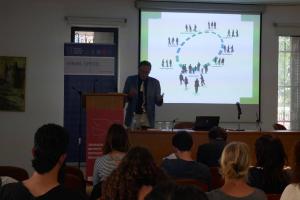 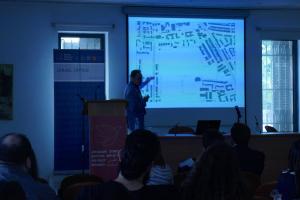 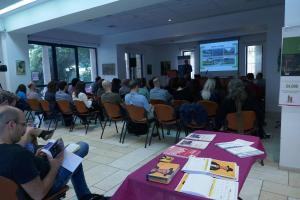