Nepotism, Bribery, Patronage, Collusion… The list of categories in the murky sphere of corruption appears to be a bottomless pit. The obstinate prevalence of corruption has, for the longest time, been one of the most perturbing thorns in the flesh of nation states all around the globe. Especially in Asia, large parts of both the public and private sector are riddled with corrupt practices, gravely undermining efforts to expedite the conduct of ‘good governance’.
December 25, 2014 Ordering Information

On a brighter side, sparks of hope are kept alive through the recent Anti-Corruption Action Plan brought into being by the ‘Group of Twenty’ (G20), pledging their commitment to ‘Ductus Exemplo – Lead by Example’. While the enforcement of existing anti-corruption conventions is surely a fundamental component of the overarching master plan, the sheer success in ascribing such significance to a vital theme on a global platform alone is a formidable accomplishment.

The book covers the developments of the past few years concisely, yet in an informative manner. It sheds light on the extent of corrupt activities in several Asian-Pacific countries, determining the type, cause and measures taken up, in order to curb the spread and institutionalisation of corruption.

The author, Dr. Norman Abjorensen, is by no means an unfamiliar face to the Konrad-Adenauer-Stiftung. He participated at various conferences and workshops and contributed to other publications. Norman is a Visiting Fellow in the Policy and Governance Program at the Crawford School of Public Policy, College of Asia and the Pacific, Australian National University, Canberra. A former journalist, he was national editor of the Sydney Morning Herald, and is a prominent media commentator. He is the author of several books on Australian politics and co-author of Australia: The State of Democracy (2009). He is author of the Historical Dictionary of Australia (4th edition) to be published early in 2015. In 2014-15 he is Research Fellow at the Prime Ministers Centre, Museum of Australian Democracy. In 2012-13, he was Visiting Professor of International Public Policy, Graduate School of Law, Hitotsubashi University, Tokyo, where he convened a graduate seminar on corruption. 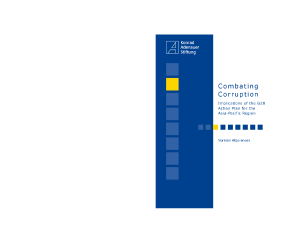