Contemporary music from Japan is branded “J-Pop”. The "J-Curve", however, has nothing to do with Japan. Instead, it describes the effects of a depreciation of local currency on the current account balance. According to the economic theory, a weaker currency leads to decreasing imports and increasing exports. As a result, the current account balance improves after a temporary deterioration. The graphical description of the effect resembles the letter "J". Hence the name. Yet, this is so far just theory for Japan.

Despite the very strong depreciation of the Yen, the latest numbers for the Japanese current account and trade balance reveal a serious deficit. Although exports increased, imports also rose. Since 20 consecutive months, the balance is in the red.

The reasons for this development were subject of a discussion hosted by the regional KAS "Social and Economic Governance Programme Asia" (SOPAS) and the "Japan Economic Foundation" (JEF) in Tokyo. Apart from economic experts from Japan, researchers and scientists from India, Bangladesh, Poland, New Zealand, Germany, Malaysia and the People's Republic of China attended the meeting on Monday (March 24).

According to the Japanese experts, the current account and trade balance deficit not only results from the country’s dependency on expensive energy imports after the shutdown of its nuclear power plants. Instead, the development is also related to the fact that Japanese companies are increasingly investing abroad to produce their goods on location and to also export them from these markets to other countries.

So far, the aggressive monetary policy promoted by Japan’s Prime Minister Shinzo Abe and the depreciation of the Yen had no positive effect on the current account balance. The planned reopening of more than a dozen nuclear power plants might reduce the deficit, however, because Japan could waive a portion of its energy imports. However, the return to nuclear power is a controversial topic in the public sphere.

Perhaps more than ever, the success of the economic and energy policy of the Abe administration is therefore also a question of public support. According to the Japanese experts who attended the meeting in Tokyo, the increase of consumption tax from five to eight per cent at the beginning of April should also be seen as a political signal to indicate that Japan is serious about fighting its high public debt although the tax hike will result in higher prices for goods and services.

Instead of talking about "Abenomics", Nippon should perhaps have coined the term "Abelympics" for its economic reform programme, one of the Japanese panellists in Tokyo suggested. This way, part of the anticipation of the 2020 Summer Olympic Games would perhaps rub off on strong public support for the reform process, he said. 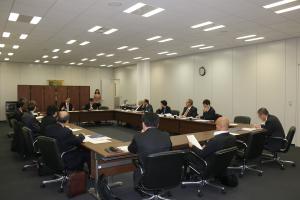