Future of Work for the Asian Youth: Indonesia

The second session of the Future of Work for the Asian Youth webinar series shifted the discussion to Southeast Asia, this time focusing on Indonesia.
November 17, 2020 Ordering Information 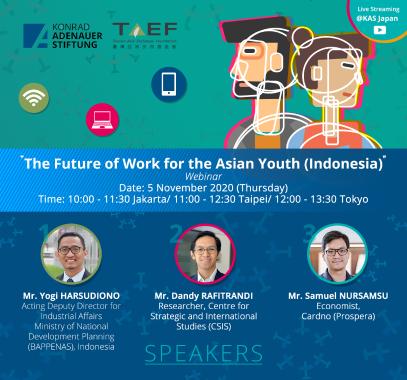 The webinar panelists represented the government, the academe, and the industry

Proceedings from the webinar, "The Future of Work for the Asian Youth (Indonesia)" held last 5 November 2020

Mr. Harsudiono provided the government perspective for the session. He started by presenting the current state of the Indonesian economy. He mentioned that the Indonesian economy has been facing mounting pressures from the enduring COVID-19 pandemic, which has left a serious impact on the country’s economic growth and employment prospects. The economy will need to grow much higher at 6-7 percent post Covid-19  and provide more local jobs-absorbing 500 thousand new workers, per-1% economic growth- in order to achieve the development target set out in the Medium-Term Development Plan 2020-2024.[1] Furthermore, the Indonesian labor market has been witnessing shifts to digital operations stemming from demands of what the country perceives to be the ‘new normal’.

He then presented two important issues for the future of work in Indonesia: first, the current challenges facing the Indonesian labor market, and the Government Work Plan second, specifically on the development policy for youth.

The difficulties in the labor market has always been a bottleneck to Indonesia’s economic growth. This fact has been acknowledged by the Indonesian government, which has emphasized its commitment to reform regulations with the goal of providing support to local businesses and, in effect, create new jobs. For its part, the Indonesian Government has been addressing regulatory deficiencies by setting out a multi-pronged strategy to ensure sufficient job creation, a focus on human capital development, worker upskilling, and the implementation of its Industry 4.0 strategy.

To further address youth development problems, Mr. Harsudiono shared the framework being employed by the Indonesian government to increase youth productivity, promoting youth empowerment, and improving their chances of finding suitable opportunities. These efforts by government also seek to strengthen the Indonesian youth's industry knowledge and equip them with the required skills to better prepare them as they enter the labor market.

Mr. Rafitrandi’s presentation discussed the driving forces behind Indonesia’s future of work. He showed in brief how the employment landscape has changed over the years and its possible future given its current trajectory; the implications of technology to the Indonesian youth and the labor market; as well as policy perspectives to better address arising challenges.

The unprecedented technological advancements and automation have mostly been tied with Indonesia’s industrial revolution 4.0 (IR 4.0), namely artificial intelligence, robotization, 3D printing and cloud computing. The future of work will be more task-based, flexible, non-routine, and remote.  With these changes, IR 4.0 is expected to raise productivity of firms, replacing manual labor to ‘more efficiently’ execute the monotonous, repetitive, and high-risk jobs.

The changing nature of the employment landscape also requires evolving the youth’s skills. It is foreseen, however, that there may be a shortage of programmers, data scientists, and software developers in the future, suggesting that cognitive skills could be the answer. Still, social or behavioral skills will continue to be indispensable as AI or robots are incapable of exhibiting them. Indonesia should then revisit the education system and equip learners with these essential skills.

On the implications of technological change to Indonesia's labor market, IFLS data showed the negative association between routine and manual task jobs and their salary, for example, the income trend for jobs such as sewing machine operators and assembly line workers is declining. In addition, while the Indonesian youth possess a marginally high degree of digital literacy, the limited number of high-quality jobs hinders them from making use of these high-valued competencies. This happens because the utilization of industry 4.0 in Indonesia manufacturing industry is still below other ASEAN countries.

Mr. Rafitrandi also mentioned the need to learn from other countries’ policy and best practice models. From Vietnam, Indonesia can learn about effective primary education as empirical evidence shows that Vietnam is one of the most successful countries in terms of early education and K-12 policy. For the technical and vocational education and training (TVET) program, Indonesia can refer to Switzerland as the benchmark for its Apprentice System. Singapore's Skills Future initiative is a great example where participants develop their skills through tailor-made courses, including data analytics, cybersecurity, and entrepreneurship. So far, Indonesia has already introduced a similar program called Kartu Prakerja, but there is still room for improvement such as increasing subsidies and improving incentives.

Aside from the government and academia perspectives, the last perspective from industry is presented by Mr. Nursamsu. Some issues covered in his presentation were related to i) automation from employment and industry contexts; ii) Indonesian youths’ prospects and challenges in future of work; and iii) his suggestions for policy recommendations.

Automation and Industry 4.0 has been reshaping the business environment and the job market. Mr. Nursamsu mentioned about the ‘labor destroying and augmenting effect’ in automation, which suggests that while new jobs are created and enhanced, there will still be those left behind due to the need of learning new skill sets. However, the automation effect to Indonesian employment is disproportionate, depends on age group, gender, job type, industry/sector type, and skillset. As a result, automation has decreased the time spent to do routine tasks while significantly increased non-routine tasks and technology-related tasks. Further, highly skilled young workers benefit more from automation as more income growth is given and complex and non-routine tasks are increasing. Interestingly, gender equality is not a concern as there is hardly a difference in income between men and women.

The effect of automation on industry is heterogenous, but there is nothing to fear as automation productivity still needs to be improved and jobs will overall be increased, especially in the manufacturing sector, where the net magnitude of automation is supposed to be labor enhancing. Previously, low technology level and absorption held back Indonesia’s growth potential because productivity was still low. On the other hand, automation and new technology will bring more output, thus enhancing growth potential.

Despite all the good possibilities, Mr. Nursamsu mentioned the need for Indonesia to improve and change the skill requirements for Indonesia’s young people. Theyouths are optimistic and confident, but low-quality education and skills remain to be the greatest concern. Basic important skills like mathematics, literacy, critical thinking, and communication—skills that are important to create trainable workers—are somehow lacking. The gravity of this problem is further highlighted given the increasing global competition for jobs.  It is then important for Indonesia to give more focus on education, trainings, and social protection. For example, the quality of education in schools need to be improved, increase investments in education, and improving access to TVET can significantly improve opportunities for the Indonesian youth.

1. Indonesia is a big and diverse country from Sabang to Merauke, what strategy and policy could be used to ensure that future work opportunities will be balanced between central/ local and big city/rural areas, improving overall quality of life in rural areas (not only in big cities)?

The development of automation in Indonesia is reaching the early stage. While it can be advantageous for the Indonesian future economy, the challenge remains as the benefit can only be accessed by formal workers, highly skilled workers and young people. People in rural areas, for example, those who work for manufacturing industries and the agricultural sector, are still lacking in engineering skills, computational skills and other skills related to technology. Thus, enhancing technical skills for people in rural areas is strategically important. In addition, the basic education which provides critical thinking and cognitive skills remain vital for future works. Unfortunately, the level of basic education in rural areas is still considerably low. Therefore, the government also needs to provide a solution over this issue as well.

2. Based on BPS data, 50% of workers in Indonesia are under-qualified, what current initiatives—government-led or otherwise—are in place to address this problem?

While the lack of technical skills remains a problem in rural areas, the issue of under-qualified workers is also hampering the future of work in Indonesia. Lack of education and high degree of job mismatch contribute to the high numbers of under-qualified workers in the country. Observers suggest that the lack of incentives provided for job training and education for workers also become the main reason why workers never achieve certain degree of qualifications needed. In addressing the problem, the Indonesian government already launched vocational training under the triple skilling (skilling, upskilling, and re-skilling) program last year. The program aims to develop soft and hard skills relevant for workers in order to push more job creation in the country. Earlier this year, the government also launched a pre-employment card program which provides cash aid and training subsidies for unemployed workers. Through this program, the government expects to cover 5.6 million eligible recipients by October and reserving 80 percent of the admission quota for workers laid off or furloughed due to the pandemic.

3. Indonesia is culturally diverse. How are strides in development being upheld without undermining ethical standards across cultural groups and gender in the country?

In preparing the shift towards a digital economy in Indonesia’s future of work, the country also needs to adapt to several cultural changes including addressing the issue of gender gap in the workforce. By allowing more women to work and enhancing education levels for women in rural areas, the future of work for Indonesia can positively promote the issue of gender equality.  Further, according to observers, the Indonesian government acknowledges the socio-cultural issue as one of the challenges for the country’s future of work, it can be putting into policy objectives and policy mainstreaming of the medium national development plan. However, the implementation on the ground is still lacking with women participation joining the workforce are still comparatively low to men. However, observers also see gradual positive changes where women take the lead in business sectors and play big roles in policy making.

4. What are the vital skills needed in business and industry to better prepare Indonesia’s youth?

While we see the promise of technology, people also see concern about automation replacing workers. Technology implementation in Indonesia, indeed, is still very young. However, the government needs to facilitate Indonesian society’s adaptation to the future of work by providing more trainings to equip them with relevant skill sets. Being laid-off due to the industrial shift into automation and digitalization is also one of the issues that the Indonesian government needs to address. It is equally important for the Government to provide more social protection for workers.

Ms. Cristita Marie Perez provided two key takeaways for the session. First, we should not fear automation. Automation in Indonesia is still labor enhancing as still create more jobs. Thus, it will further increase productivity in industries where automation is applied. Second, investing in education for improving human development and increasing human productivity is very important. Hence, having policies that correspond with the changing skill requirements is fundamental. Also, adjusting to technology adapted skills sets, especially in improving basic skills and improving young peoples’ critical thinking have been proven to be an asset in the future.

Before officially closing the session, Dr. Alan Hao Yang emphasized on Indonesia’s commitment in preparing its youth for the future of work. He noted President Jokowi’s emphasis on talent trainee and talent cultivation for his second term as president.

Future of Work for the Asian Youth (Indonesia) 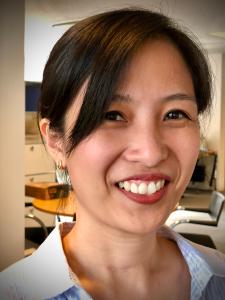