by Brevin Anderson, Him Raksmey

In 2040, this has led to many positive outcomes. Private capital investments have dramatically increased with the reduction of crowding-out effects and the political uncertainty caused by outsized Chinese influence.
February 28, 2021 Ordering Information

Why should I read this chapter? ... becuase the future Cambodia will have reliance on foreign sources but its own!

Mr. Brevin Anderson and Mr. Him Raksmey's vision for foreign aid and development assistance in the 2040 Cambodia:

Gary, a USAID specialist with the Feed the Future program, finishes packing up his second-story apartment. The busy sounds of the street market below filter up through the window, and somewhere someone is playing BBC Cambodia, recently launched with an all-Cambodian staff, much too loudly. After spending the last twenty years of his career traveling between Phnom Penh and rural communities around Cambodia, his work was finally done. USAID’s food program was shutting down, leaving the work to a new cohort of Cambodian civil servants. There were still a few communities at risk, as he had outlined in his last report, but when the new roads reached them, it was only a matter of time.

As incomes rose and aid slowed, many of Gary’s long-time foreign friends at other NGOs had seen their projects wrapped up and ended or transitioned entirely to Cambodian staff. They had been hands-on types, crisscrossing the country to compile reports and check in on the projects that reported to them. They had worked in every field, from healthcare to education to food security. Replacing them in his apartment block was a new group of foreigners. The individuals filling the rooms were businesspeople. More impressive was the huge surge in Cambodians, most with terminal degrees and niche specialties in financial markets, that had driven up his rent in the past five years.

With his last suitcase packed, Gary left the building, just barely making it to the bus stop in time. The electricity-powered bus was part of Phnom Penh’s recently finished carbon-neutral public transportation system, the result of a public-private partnership with Chinese company, and supported by NGOs who advised the project. The advisors, in conjunction with Cambodian counterparts, held a series of lengthy public forums to debate the impact of the system on lower-income quarters of the city. The forums were well-covered by the local blogs and podcasts, and resulted in an equitable consensus with broad public support. As he arrived at the airport and left the bus, Gary took one last look at the city’s skyline. It was satisfying he had no more work to do here. He decided he would come back soon, but as a tourist. 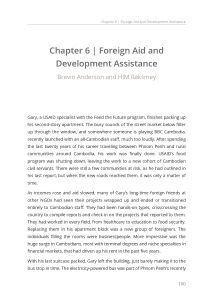