This book summarizes the main topics related to the understanding of the European Union focusing on: the history of the development of the European Union, key decision-making institutions, mode of operation, enlargement and relations with the Balkans and Kosovo. The book is dedicated to high school students and addresses topics that are very superficially included in the school curriculum. The book is only available in the Albanian Language.
April 23, 2021 Ordering Information 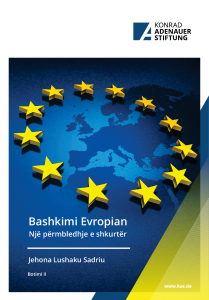