“Transatlantic Relations during the new US Administration ”

Implications on the Global Role of Europe and EU Enlargement

A seminar and workshop for young members of center right political parties.

The Inclusion of Minorities in Politics

The event, which was organized for young party members of different ethnic groups, aims to increase minority participation in politics. Through open discussion with experts of the field and among each other the participants had the chance to exchange experiences, gain new knowledge and create a network that will help them in their future career in politics

HOW TO ESTABLISH COMMUNICATION AND TRANSPARENCY WITHIN THE STRUCTURE

KAS together with the Eduardo Frei Foundation organized this seminar for young people who are members of our partner political party to present and discuss the best methods of better structure of youth organization, transparency and accountability.

KAS in cooperation with the Young European Federalist (JEF) from Kosovo, is organizing for the fourth consecutive year the Balkan Youth Forum (BYF).

We aim to create a group of students that are able to understand ideologies better and to be ready to share it with others. With high interest, we will introduce Social Market Economy as well known approach that could be adopted also from Kosovo.

ADVOCACY AND INFLUENCE – HOW TO GET MORE WOMEN IN LEADING POSITIONS

KAS together with Eduardo Frei Foundation from the Netherlands organized this training for female party members in order to encourage them for more political participation and action on a local, regional and national level. 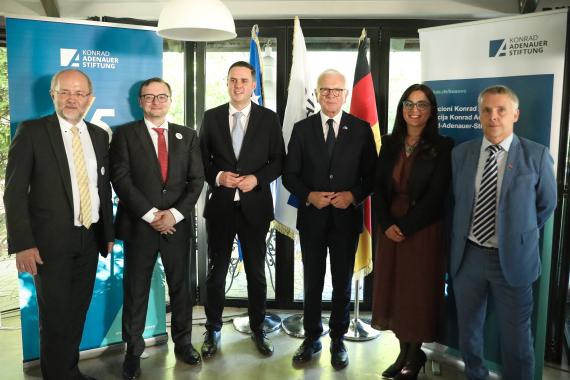 On June 15, 2022 the Konrad Adenauer Foundation in Kosovo celebrated its 15th anniversary 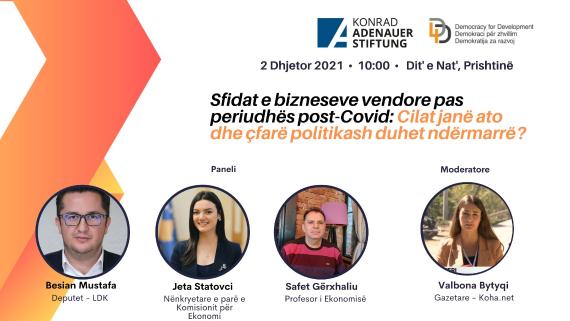 Challenges of Local Businesses after the post-Covid Period

What are they and what Policies should be undertaken?

From the Tuesday Salon "Challenges of local businesses after the post Covid period: What are they and what policies should be undertaken?" held on December 2nd 2021, written by Besnik Boletini 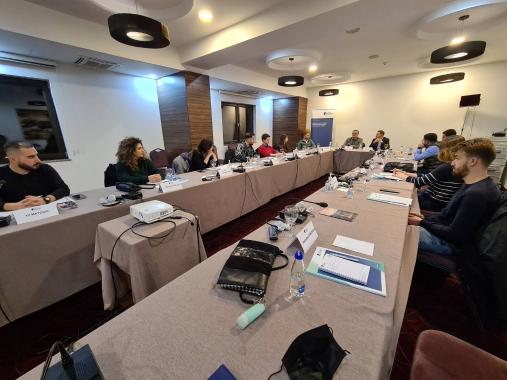 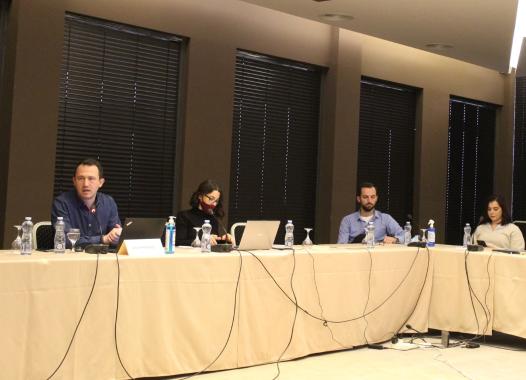 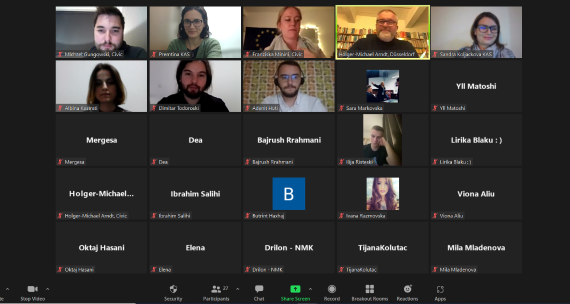 A seminar and interactive simulation game where participants learned about the complexities of the European Union in a fun and exciting way. 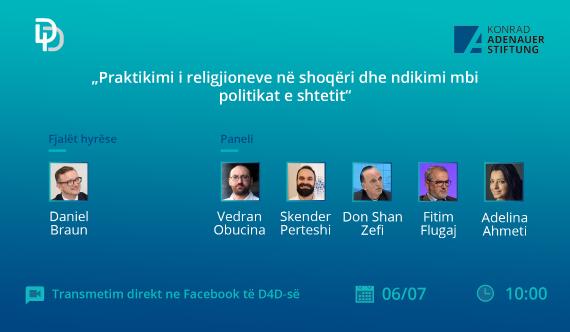 From the Tuesday Salon " The practice of religions in society and the influence on state policies " held on July 6th 2021, written by Skender Perteshi

The liberal values of the secular state, as well as the potential influences of religion on it, have sparked heated debates and discussions around the world. With the economic and social transformation of the states, these debates have to some extent been resolved, quite clearly dividing the competencies of the secular state as well as religious issues, without influencing each other, but by cooperating with each other. 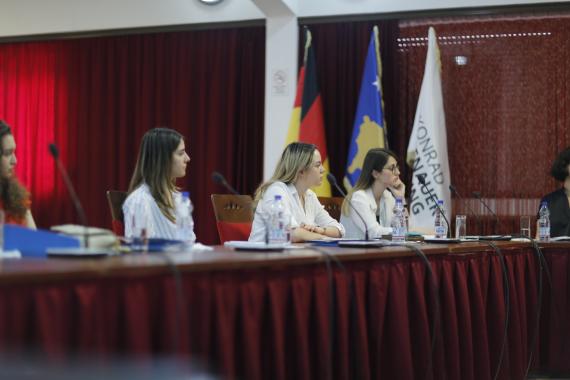 A seminar with the current KAS scholars, tackling issues that are related to Kosovo’s path towards the European Union 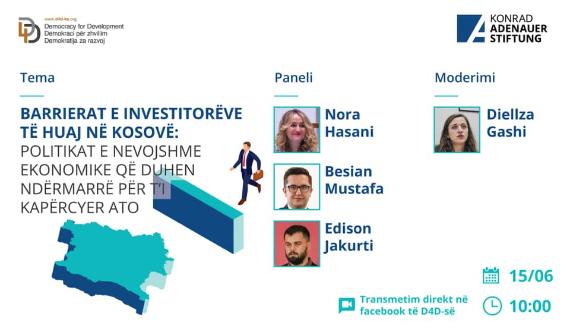 From the Tuesday Salon "Barriers of foreign investors in Kosovo - Necessary economic policies to overcome them" held on June 15th 2021, written by Diellza Gashi Tresi 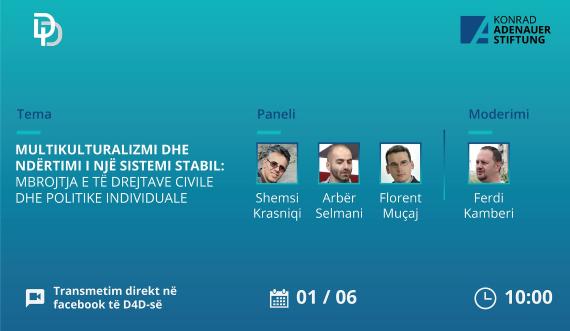 Multiculturalism and Building a Stable System: Protection of Individual Civil and Political Rights

From the Tuesday Salon "Multiculturalism and Building a Stable System: Protection of Individual Civil and Political Rights" held on June 1st 2021, written by Ferdi Kamberi

The concept of multiculturalism includes cultures, races, ethnicities or minority groups, which have specific characteristics within a culture or politics. In Kosovo, this concept is included in the highest legal-political act in the Constitution of Kosovo and that ethnic groups / non-majority communities are protected as a separate category. However, in practice the implementation of legislation still remains a challenge which is often mentioned in international reports. 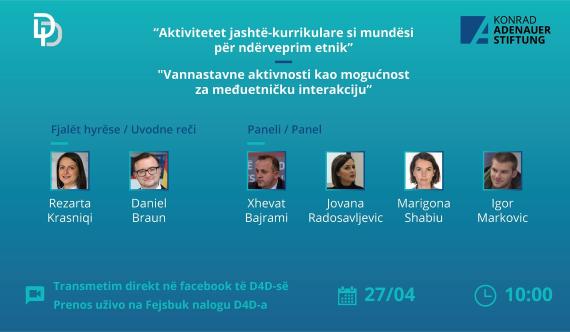 From the Tuesday Salon "Extracurricular activities as opportunities for ethnic interaction" held on April 27th 2021, written by Lirije Palushi

The question of why there is a need for extracurricular activities for ethnic interaction may seem rhetorical at first glance. Still, this topic is necessary to eliminate barriers between ethnic communities in Kosovo, create more favorable conditions for interethnic cooperation, and create conditions for a more stable society. Over 13 years since the declaration of Kosovo’s independence, the lack of interaction remains one of the significant challenges for the integration and coexistence of ethnic communities in Kosovo, emphasizing the interaction between the Albanian and Serb communities. Although in many municipalities, communities are geographically close to each other, opportunities for interaction remain limited.