Political communication in the age of social media

The purpose of this book is to address political communication in Kosovo in the digital age, namely the use of social media by political parties in the election campaign. The book is available only in Albanian.
July 14, 2021 Ordering Information

The study of political communication has always been closely linked to the media and their development. In the last decade the focus has shifted to social media, due to their widespread use and, consequently, their impact on the electoral process. The focus of political actors on social media has also led scholars to deal more closely with the possible effect that social media may have on the election campaign and elections. As in more developed countries, so in Kosovo, the use of social media by political actors is increasing. But, as confirmed in the conclusions of various researchers, which will be highlighted in the third chapter, the way of using social media and, above all, the purpose of their use varies from state to state, or even from region to region. Politicians seek to spread their ideas and gain the trust of citizens by communicating directly with them through social media, Facebook or Twitter. This type of communication has already ruled out the great role of the journalist in the process of political communication and, at the same time, has given the politician the most appropriate means to deliver a message, without fear of that message being 'censored' or filtered from the editorial policies of the radio, television, newspaper, or portal. Facebook and Twitter have narrowed the distance between the politician and the citizen. At first glance, this seems extremely positive, because avoiding distance enables a more direct, faster, more frequent, easier communication and, thus, citizens can always address their concerns to the politician, whom they see as someone who can solve their problems. But historically, politics has always aimed to have the media in hand, in order for the media to be at its service and for the media to convey the message to the public as it wants, as politics wants and as it suits them. The object of this study is the use of social media by political parties for political communication with citizens, respectively voters in the 2017 general elections. 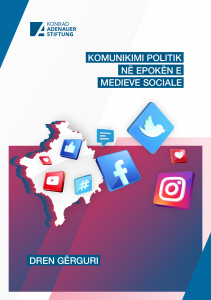