The Citizen’s Mindset Towards Political Questions

What are the views of Kosovar citizens on the connection of the state with the economy? What do they think about individual freedoms, the ideology of political parties in the country, political participation? These and many other questions are part of this survey conducted in collaboration with our partner PIPS.
July 19, 2021 Ordering Information

The survey ‘The Citizen’s Mindset Towards Political Questions’ has been published for the first time by the Konrad Adenauer Stiftung (KAS), office in Prishtina and the Prishtina Institute for Political Studies (PIPS). The survey is based on the premises of impartiality, objectivity and validity in the process of drafting questions and obtaining the data, as well as in the phases of analyzing and interpreting the results. The survey aims to produce credible results that will be useful to all stakeholders involved within this field, such as: political parties, decision makers, policy makers, scholars, analysts and those who regard this study area as their interest.

The results of the survey are divided into two parts: Perceptions on the relations of the state with market economy and individual freedom, and Perceptions on politics and participation. The first part contains questions that seek to better understand the opinions of respondents on the role and wideness of the state, especially in relation to the role of the individual in society. This set of questions is in many ways universal and is commonly used in similar surveys in other contexts for the same purpose. The second part lists questions that aim to shed light on the attitudes of citizens in relation to the political context in Kosovo, existing political entities and electoral participation. As such, this set of questions is more heavily focused in the local context. The report proceeds by offering the questions and results of both these sections, accompanied by a brief description. Then in the following section, the report offers a statistical analysis, which presents the analysis of the segment of Kosovar voters being divided into certain groups. The report concludes by introducing the survey methodology. 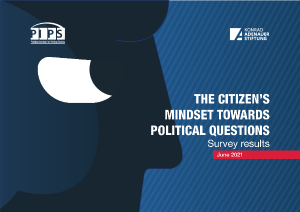