Written by Dr. Shqipe Mjekiqi this book examines the impact of electoral systems on the way Members of Parliament (MPs) behave as measured both in terms of Parliamentary Party Group) unity and constituency links. The book is available only in Albanian.
March 1, 2022 Ordering Information

The research adopts a quantitative approach by analysing roll-call votes (RCV) from 21 European countries, including 6 South East European (SEE) countries never studied before and in addition, a qualitative approach is used to examine the extent to which MPs in two SEE countries, namely Kosovo and North Macedonia, establish close links with their constituents. The analysis of roll-call votes reveals that PPG unity is generally lower among SEE countries compared to Western European countries, although the difference is not significant. Moreover, results of multi-level regression analyses show party system institutionalisation to matter more than electoral systems. That is, when the level of PSI is low, cohesion tends to be generally higher under closed-list PR, among other party-centered systems, and lower under open-list PR, among other candidate-centered systems. Government parties are also seen as more cohesive compared to opposition parties. And, similarly, the smaller the margin of government over opposition within parliament, the higher the PPG unity.

When examining the impact of electoral systems on the extent of constituency links MPs establish, the case of Kosovo, where the electoral system changed from closed-list PR to open-list PR shows that MPs under the latter system develop more links with their constituents as opposed to their former colleagues. MPs under the open-list PR system reported they spend more hours on constituency activities, more hours in the local area, they receive a larger number of requests weekly by the voters and spend more time dealing with those requests. The case of North Macedonia, with a closed-list PR system, also shows that MPs tend to develop close links with their constituents, but interviews with MPs revealed this is mainly due to methods of candidate selection where parties' decision on where to place candidates on the list is dependent on the latter's perceived popularity among the voters. This finding shows that the electoral system alone is not sufficient to enable us to understand and predict MPs’ behaviour. If opinion polls are used to determine list order, as is the case in North Macedonia, then in effect this comes close to transforming a nominally closed-list system into a de facto open-list system.

Overall, the research shows that the impact of electoral systems is more nuanced than some previous research has suggested. The impact is contingent upon other factors, especially the level of party system institutionalisation. When PSI is low, the electoral system, especially the choice between open-list and closed-list versions of PR, is likely to make more of a difference than when it is high. Moreover, even the unifying impact of closed-list PR can be negated by other aspects of the process through which individuals become MPs, especially the candidate selection process, which in North Macedonia has the effect of inducing MPs to behave much as MPs elected under open-list PR are predicted to behave. Hence, the study suggests that the level of party system institutionalisation, and methods of candidate selection, are important variables that should not be neglected in any theory of PPG unity and of links between MPs and the electorate. 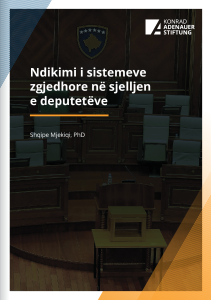 Book 21-12-31 The impact of electoral systems upon the behaviour of members of parliament.pdf
Download