The Parliamentary Special Select Committee on Electoral Progress of Malaysia visited the KAS headquarters and the CDU headquarters in Berlin on 24 February 2012.
April 12, 2012 Ordering Information

H.E. Dr. Maximus Johnity Ongkili, Minister of Science, Technology, and Innovation of Malaysia and a delegation of nine Members of Parliament were visiting Wiesbaden and Berlin (Germany) in February. The politicians travelled in their capacity as members of the “Parliamentary Special Select Committee on Electoral Progress of Malaysia” to gather information on the German electoral and party system. The visit was organized by the German Foreign Office and the Konrad Adenauer Foundation (KAS).

The group had the opportunity to meet senior government officials in the Federal Chancellery of Germany as well as representatives of the headquarters of the ruling party in Germany – the CDU – which is affiliated with the Konrad Adenauer Foundation. In addition, the delegation had an intensive discussion on the German electoral system with the German Federal Returning Officer and leading experts on electoral law in the Academy of the KAS in Berlin. 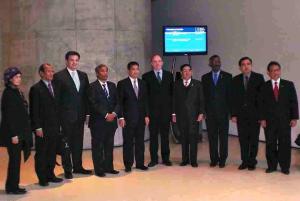 The Minister and his delegation in the Academy of the Konrad Adenauer Foundation in Berlin, with Dr. Stefan Friedrich, Director Team Asia and the Pacific and Martin Boehme, Head Section Southeast Asia of KAS.