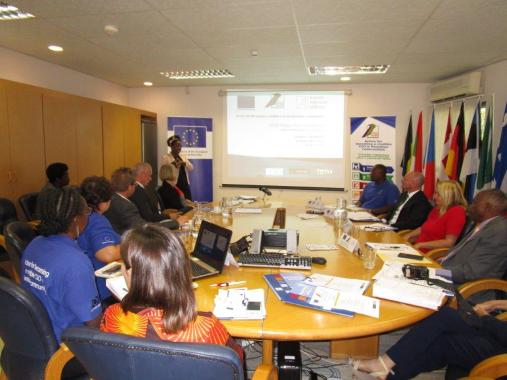 Members of the CSOAG at third meeting, June 2017 Participants at the ToT, April 2017 Prof. Peter Katjavivi, Speaker of National Assembly at the project launch in Windhoek 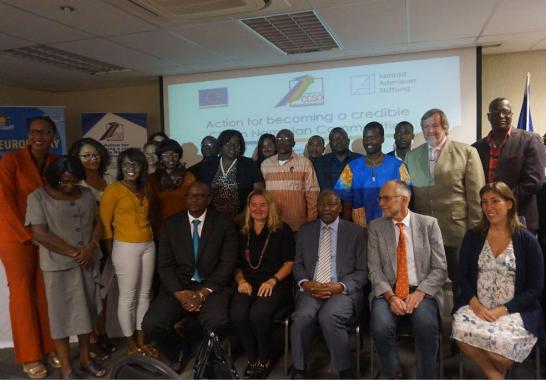 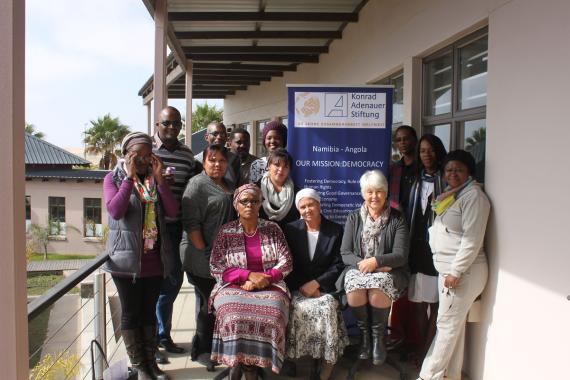 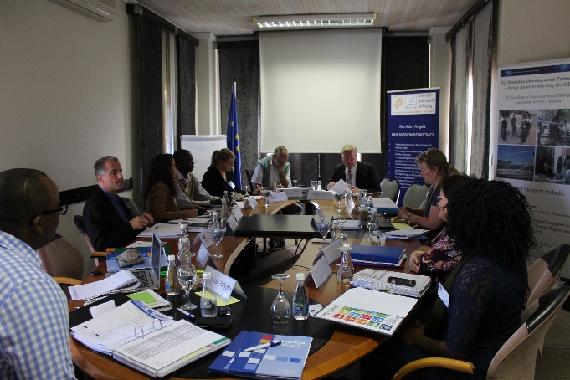 EU, KAS and partners during the inception workshop Presidential PRO, Albertus Aochumub presenting the Harambee Policy to the Local Councillors & stakeholders at the ALAN-Congress in Oshakati The Project started in April 2016 and will run until 31 March 2019. It is implemented in five Regions in Namibia: Erongo, Hardap, Omaheke, Oshikoto and Otjozondjupa. It is co-sponsored by the European Union and the Konrad Adenauer Foundation and will have a budget of 749, 281 € (+- N$13 Million). The main goal is to reinforce Civil Society Organisations (CSO) as influential actors in Namibian communities.

The planned interventions cover working with Parliament & elected representatives, capacity building of various selected CSO’s in the targeted five region, raising public awareness, the production of training programs and materials as well as capacity building sessions and an impact assessment.

Background of the Project:

- At Independence CSO were very active, but activities declined in the past 26 years due to various factors, mainly funding

Over the course of four days, the workshop had an opportunity to discuss and review the project activities, planning, budget, Monitoring and evaluation as well as other important matters. The Workshop was attended by members of the KAS-Office Namibia-Angola, Representatives of the KAS-Headquarter from Berlin and the Head of Department for Sub-Sahara Africa, Andrea Ostheimer, Representatives of the EU and the Project Partners, as well as the Project Implementation Unit (PIU), which consists of the Project Manager - Dennis Zaire, the Project Officer - Naita Hishoono and the Project Accountant - Sonja Poller. The work shop was a great success and the entire team looks forward to the successful implementation of the project over the next three years. The project will be officially launched on 19 August 2016 at the Polytechnic Hotel School at 09:00.

On 21 June 2016, the Project Implementation Unit (PIU) met the members of the CSO Advisory Group for the first time. After a detailed introduction to the project and its aims and timeframe, the group discussed all remaining questions and the tasks for the CSOAG. The members made good contributions and comments that would assist the successful project implementation.

The Project Implementation Unit (PIU) joined the 7th ARC Congress on 22 June 2016 in Keetmanshoop to introduce the project to the gathered regional decision makers as well as to network.

Following a short introduction to the Konrad Adenauer Foundation, the Project Manager - Dennis Zaire, explained the Background and the Objectives of the Project, as well as the expected results, possible risks and the individual activities to fulfill the goals of the project.

The gathered members showed great interest in the new project and asked to be consulted and informed about the project activities as the project continues.

Following an invitation by the ALAN-Secretariat, the PIU attended and presented at the 57th ALAN Congress in Oshakati, Oshana Region. They also used this opportunity to undertake their second regional visit and scheduled meetings with the Regional Councils in Otjiwarongo, Otjozondjupa Region, and Tsumeb and Ondangwa, both towns in Oshikoto Region, before heading to the Congress on June 7th.

During consultation with the regional leadership of the two respective regions, the team took the opportunity to present the new CCSO Project. The congress was attended by all 57 local Authorities as well as the Minister of Urban & Rural Development, Hon. Sophia Shaningwa, the Minister for Economic Planning; Hon. Tom Alweendo, Minister for Economic Planning & Director General, Mr. Albertus Aochomub, Presidential Press Secretary, Hon. Margareth Mensah-Williams, Chairperson of the National Council, including ALAN’s counterparts from Botswana and South Africa also attended.

On the 19-20 June 2016, the PIU started with the setting up of Regional structure in Omaheke Region. During the two days the team met with the Omaheke Regional Council as well as members of the Civil Societies (CSO’s) in Omaheke. The meetings where extremely fruitful as many regional issues were discussed. The second meeting of the CSO’s in Omaheke is scheduled for 23 August 2016 in Gobabis.

On 25-26 July 2016, the PIU went to Swakopmund to set up the Erongo Regional Structure. The meeting with the CSO’s in Erongo Region took place on 25 June 2016 at COSDEF Centre in Swakopmund. The meeting was a success and a follow up meeting is scheduled for 16 August 2016.

The next region to be visited by the PIU was the Hardap Region. The team visited the region on 28 – 29 July 2016. The meeting took place at the Catholic Parish Mission Hall in Mariental.

Otjozondjupa and Oshikoto region are still to be visited to set up the CSO structures.

On 19th August 2016 at the Polytech Hotel School, the CSO project was officially launched jointly by the Speaker of the National Assembly, Hon. Prof. Peter Katjavivi, and the EU Ambassador H.E. Jana Hybaskova. Both speakers underlined the importance of civil society in a democratic system. They indicated that civil society has a critical role to play in society and in assisting government in bringing services to the people. The launch was attended by Councilors, Civil Society practitioners, media and implementing partners. The launch also served as an interaction between the experienced speakers and civil society practitioners as well as the media.

Between 12-25 October 2016, the PIU visited the five regions to discuss Strategic Plans and the meaning of credibility to the participating CSO's. Input was received and CSO's participated well in discussions.

Action for becoming a credible CSO in Namibian communities (CCSO) is a EU–KAS sponsored project. Its overall objective is to positively contribute to an accountable, transparent and participatory democracy in Namibia in accordance to the Namibian Constitution.

During February and March 2017, the CCSO commenced with its activities for the year by visiting civil societies and regional authorities in its 5 target regions of Erongo, Omaheke, Hardap, Oshikoto and Otjozondjupa. Discussion on cooperation between civil societies and regional authorities were on the agenda. Development matters and update on regional development priorities and how CSO’s could join regional decision-making structures such as the CDC’s also featured strongly. During the visits, participants also learned about strategic plans, separation of powers and the Namibian Constitution. Issues were collected and assimilated in a report to the Office of the Speaker and the EU Ambassador as part of the effort of linking CSO’s with higher authorities.

During the week on 2-7 April 2017, the CCSO held a successful training of trainers (ToT) at Rock Lodge, just outside Okahandja. Eight potential shortlisted trainers participated and went through an intense one week course. The course covered 3 modules: organisational and administrative skills; operational skills; public participation and engagement skills. Following the TOT, five trainers were ultimately selected and appointed as Master Trainers for the CCSO project for the first six month for Modules 1-3. The five selected Master trainers are highly experience and some of the best in the field and will be allocated one region each.

First round of trainings a great success

Following the successful ToT, the CCSO project commenced with Module 1 trainings in May 2017. Module 1 titled: Organisational and administrative skills covers decentralization, governance, managing effective meetings, record keeping, team work, public speaking and presentation skills as well as working with local communities. Training evaluations show that a good level of new knowledge was acquired by participants. The trainers performed well and displayed their best skills during the workshops. Module 2, which covers operational skills, commenced on 3-7 July with the first training in the Omaheke region.

Third round of training successful

The third round of training (Module 3) covered Public Participation and Engagement Skills. Trainings took place between October and November 2017. All trainings were successfully implemented with good participation and display of skills acquired from previous trainings, (Modules 1&2). However, attendance in Hardap, this time was low due to various factors that came into play. Overall, trainings concluded on high note with participants appreciating the skills they have acquired from the various trainings. Module 3 was the last training for 2017. Further training will commence in Feb 2018.

During October and November 2017, the CCSO Project went to visit participating CSO’s in the five regions as part of the Monitoring and Evaluation (M&E). The purpose of the visit was to evaluate the CSO's progress, determine if they implement the skills acquired from trainings, whether they have the necessary structures in place, if strategic plans, guiding documents and policies are in place. The evaluations reached 29 CSO’s in the five target regions. Evaluations revealed good successes as well as areas to improve. Challenges faced by CSO’s also came out strongly. The findings of the M&E will inform the project on further action to take.

18 months have passed since the CCSO project was launched in August 2016. The project organized a press conference to provide a ‘mid-term update’, on how the project has fared over the past 18 month. The press conference covered activities implemented, meetings held with various stakeholders, partnership formed, opportunities and challenges incurred, lesson learned and way forward for the project. The main findings highlighted by the press conference were that the project has been successfully implemented. That it had positive impact on the civil societies and communities in the five target regions. That 66 civil society organizations benefitted from the trainings and activities of the project so far. The press conference was well attended including participating civil society organisations from the regions, members of the project advisory group (CSOAG), the Hon. Speaker of the National Assembly, Prof. Peter. Katjavivi, the EU Ambassador, Jana Hybaskova, as well as other dignitaries and the press. The project received good coverage in the media. Please follow the link to listen to the podcast - https://iono.fm/e/502669

The CCSO project wishes to thank our five trainers, Mr. Jaco van Runsberg, Mr. Mekupi Tuyendapi, Mr. Theo Ngaujake, Mrs. Ndahafa Nantanga and Mr. Kavena Hambira for their hard work and willingness to share their expertise with us, the CSOs and the communities. Your efforts have contributed to building a better Namibia for all our people and those to come many years from now. We wish you all, as well as our CSOs and partners Happy Christmas and a prosperous 2018. May God bless you all.

2018 is an important year for the project. Many activities will take place during the course of the year. The training of trainers (TOT) for Act. 3.5-3.7 to be conducted at the end of January 2018 and training activities will commence soon after the TOT. We all look forward to the activities with full of hope.

The project Implementation Unit wishes to thank the regional leadership of all the five targeted regions for their cooperation and support in the implementation of the project. The participating CSO are equally appreciated for their contributions and involvement in the project. All communications should be send to: 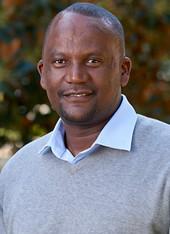