The workshop was attended by 70 delegates from Erongo Region

Report of the Panel discussion on Trade and Politics in SADC: Which way forward? 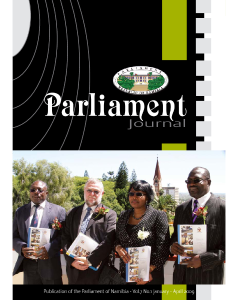 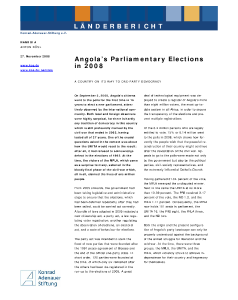 A Country on its Way to One-Party-Democracy

This executive summary of a longer article (in German) published in the same volume of KAS Auslandsinformationen 10/2008 analyses the Parliamentary elections 2008 in Angola and states that they were partly free but certainly not fair. 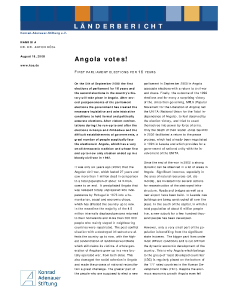 On the 5th of September 2008 the first elections of parliament for 16 years and the second elections in the country’s history will take place in Angola. After several postponements of the parliament elections the government has created the necessary legislative and administrative conditions to hold formal and politically accurate elections. After violent confrontations during the run-up to and after the elections in Kenya and Zimbabwe and the difficult establishments of governments, a great number of people sceptically face the elections in Angola, which has a very small democratic tradition and whose first and up to now only election ended up in a bloody civil war in 1992. 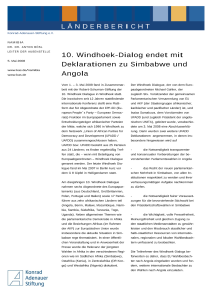 10th Windhoek Dialogue ends with declarations on Zimbabwe and Angola

The 10th Windhoek Dialogue took place on 1 – 3 May 2008 in Windhoek, in cooperation with the Robert Schuman Foundation. The international conference has been taking place for 12 years and constitutes a platform for MEPs of the EPP-ED group of the European Parliament (European People’s Party – European Democrats), and decision-makers of centrist African parties, which formed the Union of African Parties for Democracy and Development (UPADD/UPADD) in Windhoek in 1996. UPADD consists of 25 parties from 24 countries and meets regularly. In conjunction with MEPs such meetings are known as the Windhoek Dialogue. The last Windhoek Dialogue took place in May 2007 in Berlin, shortly before the G8 summit in Heiligendamm.

The country report on the rule of law in Angola is part of the KAS Democracy Report (Series) Vol. 2006. The report covers issues regarding the constitution, the legislation, the courts, judicial independence, criminal justice, corruption in law enforcement and the judiciary, public administration and provides a general assessment. 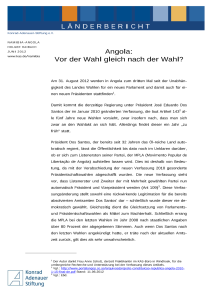