by Peter Koch
In view of the upcoming presidential and parliamentary elections at the end of November 2014, Konrad-Adenauer-Stiftung Namibia & Angola (KAS) in cooperation with Forum for the Future (FFF) organised and hosted a public election debate, with the aim of introducing and encouraging a culture of public discussion between Namibia’s political parties and society.
April 24, 2014 Ordering Information 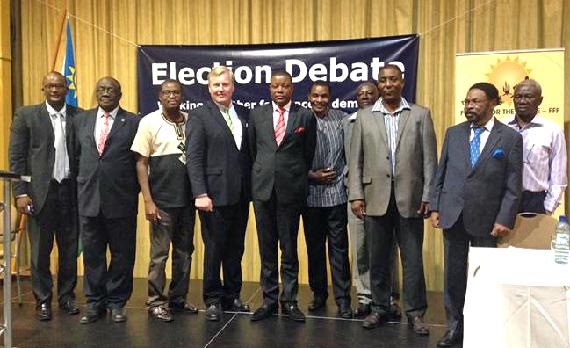 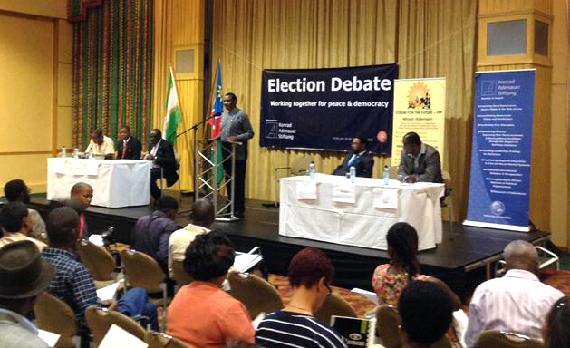 In total, nine political parties were invited without focusing on any particular representatives. The parties invited were APP, COD, DPN, DTA Namibia, NUDO, RDP, SWANU, SWAPO and UDF. This selection was undertaken by presumed relevance of the respective parties in the Namibian public. Although the landscape of political parties is certainly broader, a selection had to be made due to the uncertainty of how many parties would actually accept the invitation. Another criteria had been that at least all parties represented in the national assembly of Namibia were invited. Of the mentioned parties, neither COD, DPN, nor the ruling party SWAPO responded to the invitation or otherwise declined the invitation. The final attendees of the parties were MP Ignatius Shixwameni (APP), McHenry Venaani (DTA Namibia), MP Chief Kuaima Riruako (NUDO), MP Hidipo Hamutenya (RDP), Dr. Tangeni Iijambo (SWANU) and Themistokeles Dudu Murorua (UDF). The well respected Namibian intellectual and executive director of the Institute of Public Administration and Management Prof. Joseph Diescho moderated the event and led the audience and speakers through the evening.

After welcoming remarks of KAS director and resident representative Dr. Bernd Althusmann and brief remarks of the executive director of the FFF Samson Ndeikwila, the debate was based on three guiding questions to which the speakers responded to one after the other in alphabetic order: What is the difference between now and 1989 (independence)? In context of successes and failures that Namibia has endured over the last 24 years, how do you envisage to take us (the Namibian people) further? What would be different if your party (SWAPO remains in) comes to power? After having responded to these guiding questions, the audience had the opportunity to raise questions to the participants of the debate.

One of the topics most referred to during the discussion, was the potential of Namibia’s economy. According to majority of the discussants, the latter had not been utilized properly after independence in 1989. The disparity between poor and rich in Namibia would nowadays be one of the biggest in the world. According to DTA’s Venaani, Namibians achieved fundamental civil freedom rights in 1989, but government had failed to also give economic freedoms to the vast majority of the people. Also economic development and unemployment had not been addressed appropriately by the current government, APP’s Shixwameni argued. Furthermore all discussants basically agreed on the fact, that Namibia’s economy and particularly corporations in the sector of rare earths are too much dependant on foreign players. Not only production of raw materials but also value addition should be executed by local companies that contribute to Namibian communities and the economic growth of the country.

Nearly all panellists further realised that education is still one of the most important problems to address in Namibia. To overcome the issues of the poor education system, SWANU’s Iijambo suggested, that Namibians embark on a philosophy of education that links the values and ethics of the people to their needs. With regards to vocational training, the German dual approach was mentioned several times as a presumed role model education system to fit the needs of individuals as well as the whole economy. DTA’s suggestion to the issue of education is that Namibian’s should do away of failed students’ certification, thus not to promote mediocracy. Venaani made a promising note that all children under 18 should be in school for the country to prosper.

One of the questions raised from the audience addressed reconciliation issues among Namibians. NUDO’s Riruako ad-dressed the issue of reconciliation many times throughout and emphasised, that Namibians should start to respect one another and their different ethnicities and cultures, as well as stand together as one nation. To reconcile without solving the problem is unfair to either side. UDF’s Murorua furthermore addressed an alleged attitude of the mistrust between Namibians. True and meaningful reconciliation should not be to open old wounds, as stated by Venaani.

After the question of distribution of land was raised by the audience, Venaani claimed, that a vast number of Namibians are still considered as landless and that resettlements should not only take place in the rural areas, but also towards urban areas. He furthermore stated that communal land is run under the regime of “dead property”, which questions the value of communal land. According to Venaani, DTA will ensure to open and unlock potential of communal land in order to tackle underlying political challenges.

The audience expressed their concerns on the issue of corruption in the country that had not been addressed by any panellists in the first place. UDF’s Murorua stated that a party need’s to represent the interest of their members. Where a party’s interest is overlapped with business interest; this leads to the starting point of corruption. He further added that the independence of the judiciary system is not transparent. Corruption is a deep-rooted issue in the country that Namibians should be sincere about. Hence, DTA assures to give more teeth legislatively to the Anti-Corruption Commission (ACC). APP’s response was also that the ACC should be given more power and be structured more independent from government.

Comprising, this very first political debate among party leaders in Namibia was a great success, not only in terms of the actual procedure and the quality of discussions, but also in terms of how it was accepted from the Namibian public. Paying attention to the reactions of the audience as well as the media, it appears that Namibians seem to be at thirst for corresponding platforms, allowing the general public to inform themself of political alternatives, as well as actively interact with their very representatives. Somewhat disappointing for many audience members was the fact, that Namibia’s biggest and ruling party SWAPO did not participate in the debate. Also Namibian newspaper Sun reported critical about the absence of SWAPO, but generally covering the event very positively, headlining “Opposition target absent Swapo in historic debate” (Sun, 24/03/2014). Sun further commented one day later “Swapo was a notable absentee at the debate of political parties organised by the Konrad Adenauer Stiftung (KAS) last week” and “The event served as an important mirror into what type of potential we have for head of state and prime minister in this country”. The same article closes by stating “We are (...) disappointed by the fact that the organising of political debates are left to foreign organisations such as KAS, while our own civil society groups are in a deep slumber.” (Sun, 25/03/2014)

The mentioned reactions indicate, that Namibian society, although rarely expressed in the past, demands public dialogue and political diversification. Hence, this very first election debate on 19 March 2014 has potential to be a kick-start with signal effect for future events and change the culture of public dialogue. Immediately after this event a vast number of political parties asked for further panel discussions.