April 24th the International Day of Multilateralism and Diplomacy for Peace

When we celebrate on April 24th the International Day of Multilateralism and Diplomacy for Peace[1] we do so to preserve the values of multilateralism and international cooperation enshrined in the UN Charter, the Universal Declaration of Human Rights as well as the Agenda 2030. April 24th is a reminder to States; but as the UN Charter underlines also to “We the Peoples” to overcome the challenges of a rising protectionism and isolationism.
It is in the UN Charter that we commit “to reaffirm faith in fundamental human rights” […] and to establish conditions under which justice and respect for the obligations arising from treaties and other sources of international law can be maintained.”

The COVID-19 pandemic has created a global emergency with multiple dimensions. The public health crisis has triggered a wave of disease and death around the world. An economic, employment, and financial crisis is hurting billions of people, especially those who are already in vulnerable or disadvantaged situations. A political, social, and cultural dislocation will transform societies. It might exacerbate violence and insecurity having enormous consequences for both fragile and conflict-affected countries. Destitute living conditions, insufficient social safety nets might provoke social unrest in countries where it would not have been imaginable before.

States of Emergency and the respect for Human Rights

For weeks we have seen countries declaring states of emergencies to establish conditions to protect societies against the impact of this global public health emergency. And we do not know whether it will come to an end in the next weeks, months, or perhaps only within more than a year.

Political measures taken to protect the second-generation human right to health bear severe infringements for citizens to freely exercise their rights and freedoms, particularly safeguarded in the Universal Declaration of Human Rights and international standards of human rights. Also, lockdowns and social-distancing obligations also restrict the operation of justice systems, which are vital to challenge these potential restrictions.

Undoubtedly, this public health emergency is placing new and unknown threats and challenges to justice systems around the world.

Stakeholders within the judiciary, including judges, lawyers and prosecutors are forced to respond to the COVID-19 pandemic in a variety of ways that directly impact access to justice. Thus, it is of outmost importance to address the implications of such responses, and how they could affect the functioning of justice and fundamental rights.

Courthouses are closing their doors to the public. Court staff is reduced to those considered as necessary to conduct or support essential court functions. Oral arguments are being postponed, leaving unresolved relevant cases in different jurisdictions worldwide.

Justice workers are also on the frontline of the response, and they are vulnerable to infection. Many justice institutions are already struggling to function as growing numbers of people are forced to take time off work.

While it is legitimate and necessary to care about the protection and well-being of judicial officials, courts should, nevertheless, remain vigilant to maintain the rule of law, including during states of emergency. Shelter-in-place directives are severely affecting access to justice and, as such, limiting or restricting fundamental rights.

In this context, I am especially concerned about the direct impact of those measures in the lives of citizens in general, but particularly on the most vulnerable groups of society. What institutional or legal remedies are made available to protect, defend, and enforce their rights? I am also concerned about the ability of courts to counteract and block any action coming from the executives in this context of states of emergencies. One needs to remain attentive to those cases where states of emergency are used to restrict or impede fundamental rights in a way not necessary or proportional to the requirements of the situation.

Let us remember that in times of uncertainty, democracy and the rule of law are necessary conditions to achieve the validity and respect of human rights. As the Inter-American Court of Human Rights recently noted, measures adopted by States to address this pandemic and which may impair or restrict the enjoyment and exercise of human rights, “must be temporarily limited, legal, adjusted to well-defined aims based on scientific criteria, reasonable, absolutely necessary and proportionate” bearing in mind that it “is essential that access to justice and to complaint mechanisms are guaranteed”[2].

We must be aware, that a paralysis of the court system is likely to have severe consequences on the life of those who see in the courts as their only mechanism to seek relief and solution to current conflicts, threats, or challenges. We should remember in a context like this the maxim attributed to William E. Gladstone: “Justice delayed is justice denied”.

I salute those judiciaries that are now working relentlessly to establish remote systems and holding their first public hearings through videoconferencing services so to confront the threat of justice denied. I also encourage judges around the world to continue establishing effective mechanisms of communication as far as their country’s infrastructure allows it, and to resume their roles as guardians of the rights of the most vulnerable in our societies. We do not want to shut down the doors of justice to citizens. This is particularly important as in contexts of emergency, we are witnessing attempts to undermine not only rights and liberties, but also increasing temptations for an abuse of executive power. Without effective judicial review mechanisms, it provides fertile territory for impunity.

We need functioning and independent courts now more than ever. Our judiciaries need to be capable to quickly adapt to technological and structural challenges.

I would like to take this opportunity to encourage judges to ensure -via judicial review- that any restriction or limitation that is imposed on human rights for the purpose of protecting the health of people in the context of the COVID-19 pandemic strictly complies with the requirements established by their national constitutions, as well as international human rights standards.

The UN Secretary-General emphasized and called attention to this “watershed moment for investment in critical public services and global public goods”. The actual critical situation demands specific urgent actions to prevent not only the collapse of the public health systems but also of the justice systems. A functioning and independent judiciary is needed more than ever in this emergency. Today, I am joining Mr. Guterres’ concern and encourage judges to continue playing their crucial role in defending democratic principles, the rule of law and human rights of citizens around the world.

As United Nations Special Rapporteur on the Independence of Judges and Lawyers, I wish to call attention on eight crucial aspects:

Diego García-Sayán was appointed as UN Special Rapporteur on the Independence of Judges and Lawyers in December 2016.

The UN Special Rapporteurs are part of what is known as the Special Procedures of the Human Rights Council. Special Procedures, the largest body of independent experts in the UN Human Rights system, is the general name of the Council’s independent fact-finding and monitoring mechanisms that address either specific country situations or thematic issues in all parts of the world. Special Procedures’ experts work on a voluntary basis; they are not UN staff and do not receive a salary for their work. They are independent from any government or organization and serve in their individual capacity.

Diego García-Sayán was formerly a judge of the Inter-American Court of Human Rights for two consecutive terms. During his tenure, he was elected Vice-President of the Court (2008-2009) and President of the Court for two consecutive terms (2009-2013). He has long-standing experience working on human rights issues in a variety of settings, including for the United Nations and the Organization of American States. Among others, served as: Representative of the UN Secretary-General for the Peace Agreements at El Salvador and for the subsequent verification of the agreements reporting directly to the Security Council; member and Chairperson of the UN Working Group on Enforced or Involuntary Disappearances during several years; member of the Redesign Panel on the United Nations System of Administration of Justice, appointed by the UN Secretary-General in 2006; Head of the Electoral Mission of the Organization of American States (OAS) in Guatemala during the general elections (2007). 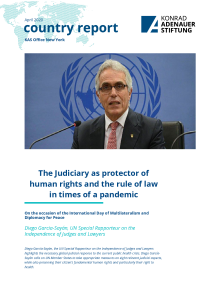