Russia and the Arctic Council

The Arctic region is currently gaining more attention for its changing significance. Due to climate changes and the increased vulnerability as well as the global geopolitical developments, the attention to the North is growing. The Arctic region had always a geopolitically relevance but the prospects of new trade routes such as the Northern Sea Route (NSR), access to previously unattainable resources and overall economic potential have raised the global interest in the Arctic and in its forums for cooperation. The Arctic Council is an example of that with its amount of observers states and organizations. The council is focusing on environmental issues and sustainable development, but security and military issues between the member states are explicitly excluded from the council’s agenda. In May 2021, Russia takes over the chairmanship in the Arctic Council from Iceland for the upcoming two years. This is the second Russian chairmanship in the Arctic Council since 2004-2006. What issues will the Russian chairmanship prioritize and what will it implicate? Due to the recent geopolitical developments, how will Russia deal with the military and security issues as chair and how might the Arctic Council evolve?
May 7, 2021 Ordering Information 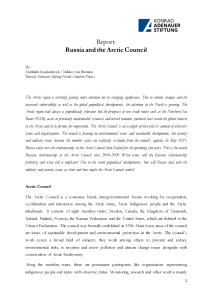