Between UN and Intifada: a turbulent September in the Palestinian Territories?

by Felix Dane, Jörg Knocha
It is unclear what the Palestinians can achieve by going to the United Nations. Some Palestinian politicians already warn of it. “September” could become the catch phrase of the Middle-East conflicts' new phase.
June 29, 2011 Ordering Information

Deep into the West Bank lays the Palestinian refugee camp Qalandiya. This is where the most important Israeli checkpoint is located. Most Palestinians, who can and want to go to Jerusalem, use it. In the last weeks, several demonstrations against the Israeli occupation took place there. On May 15th and June 5th, several hundred Palestinians took to the street. The majority protested peacefully, but in the evening hours, once international press wasn't present anymore, the situation worsened in the side streets. While small groups started throwing rocks and lighting tires, the Israeli army took a tougher stand. Whatever the outcome of the Palestinian application for membership to the United Nations in September 2011, bigger demonstrations are to be expected in the following time, for expectations are high.

The step before the United Nations

To be accepted to the United Nations (UN) in September 2011, the Palestinians must hand in an official request to the UN Secretary-General by mid-July, in which they apply for membership. The Security Council must then vote on the request not less than 25 days before the opening of the General Assembly, that is, on August 20th at the latest. The Palestinians need at least nine out of 15 votes. It is however to be expected that at the least one veto power, the USA, will try to foreclose an admission of “Palestine” to the UN. Should this happen, the Palestinians would turn to the General Assembly, which opens on September 13th. Palestinian President Mahmoud Abbas, did indeed already confirm his intention to take this alternative road. The decisions of the General Assembly are however not legally binding. But instead of deciding on an application for membership, the Assembly could vote on the symbolic statehood of “Palestine” or an upgrade of the Palestinian observer mission. 128 votes are currently needed to reach a two-thirds majority. Until now, the Palestinians are recognized as a state by more than 115 UN-member states, most of them from Africa, Asia and Latin America. Not even the often-quoted General Assembly-Resolution 377 of 1950 open the way out of this dilemma. Known under the name of “Uniting for peace”, it was meant to bypass the stalemate in the Security Council during the Cold War. Using this procedure, the General Assembly can circumvent the Security Council and become directly active, as well as issue recommendations to the member states. To use it, however, the Palestinians would not only need to prove Security Council's paralysis, but also that their lack of statehood represents a threat to world peace and international stability.

From what is known today, it must be expected that the Palestinian application for UN-membership will be rejected, since the US-administration vehemently refuses such a step. Only a Pyrrhic victory before the General Assembly would then be possible. Influential Palestinian politicians already warn of this strategy. Indeed, there are countless arguments for and against “September”.

If one listens to President Abbas' statements, one could get the impression that the entire Palestinian leadership stands behind the decision to go to the UN, if no negotiations with Israel are set. After Israeli Prime Minister Benjamin Netanyahu's speech in front of US-congress at the end of May, Abbas underlined that “we will go to the UN, if nothing happens until September”. But, according to Israeli and Palestinian newspapers, disaccord is growing. Prime Minister Salam Fayyad, former head of the government Ahmed Qureia and former UN-envoy Nasser al-Qudwa do not think that the Palestinians will gain an independent state through the UN. The right way would be to have bilateral accords with important actors such as the European Union or the USA. High-ranking Fatah-functionary Nabil Amer sees the only way to be successful in “September” to have as many states as possible confirm in writing their support for a Palestinian state. Indeed, one is worried that this would harm Israel, but not help the Palestinian cause. Even President Abbas realizes the threat of confronting the USA and loosing high amounts of financial aid. To him, negotiations remain the first choice. He repeatedly stated in June that his “first, third and second priority” would be to have negotiations. However, these could only take place once Israel is ready to accept the borders of 1967 as basis for talks.

Hamas remains unexpectedly coy when it comes to the Palestinian leadership's plans in the West Bank. The few existing statements remain vague. In an interview with the American journalist Aaron Klein, Mahmoud al-Zahar, one of the most influential islamists' leaders in Gaza, said that the international community was not able to give the Palestinians a state in September. Therefore, there was no point in asking about Hamas' position.

In a survey conducted by the Palestinian Center for Policy and Survey Research (PSR), a partner of KAS Ramallah, in December 2010, a question about the best alternative to negotiations was asked. 31 percent of the Palestinians favoured going to the UN, while 29% preferred a return to violence. Three months later, as the “Arab spring” had already erupted, the picture had changed. An overwhelming majority now called for demonstrations, not only against Israel, but also against their own leadership: the Palestinian Authority (PA) in the West Bank and Hamas in Gaza. 51% were in favour of the slogan “people want an end of the separation”. Hamas and Fatah reconciled shortly after. Nevertheless, it remains unclear whether this reconciliation will be durable and will lead to a reunification of the Palestinian Territories, as the formation of a government proves difficult already. The second-favoured slogan was “people want an end of the occupation” (24%). A merely 2% supported calls for violence and a new intifada.

Until now, participation in demonstrations against the Israeli occupation remained low. Still, the protest on May 15th, the day the State of Israel was established, were the biggest since many years. For the first time, protests took place on June 5th, the day in 1967 the Six-Days-War started and lead to the Israeli occupation of the Sinai, the Golan Heights, the West Bank including East-Jerusalem, and Gaza. Until then, this day was only meaningful in the adjacent states that were defeated by Israel in 1967. Multiple civil groups, as well as President Abbas and Prime Minister Fayyad, have been calling for peaceful protests against the occupation for a long time. Negotiations, however, are not ruled out as a consequence, since this is am approach that has been favoured by the Palestinian leadership for a few years and direct, as well as indirect talks with Israel took place during this time. Even more radical groups such as Hamas or the Islamic Jihad seem, at least temporarily, to accept the virtues of such an approach. Since the reconciliation agreement in the beginning of May, that was accepted by more than a dozen groups, Hamas did not stage any attacks. Small radical groups, however, did shoot rockets and grenades on Israel, albeit without causing any casualties. Civil groups, such as the Movement of the 15th of March, that brought thousands of Palestinians on the street, calling for reconciliation between Palestinians, now organize themselves via Facebook, Twitter and Youtube. As has been published by the Dubai School of Government Arab Social Media Report in January 2011, membership of Facebook shows that not only privileged elites participate in these discussions. At the end of 2010, more than 474.000 Palestinians were registered, more than 10% of the population and much more than for example in Egypt. More than 80% of the users are under 30.

Read the entire country report by clicking on the pdf-document. 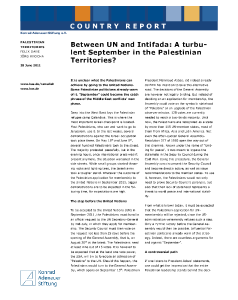