Water and Energy as drivers for regional cooperation

Study and Dialogue Program in Brussels and Berlin

In the framework of a KAS study and dialogue program, a joint delegation of Jordanian, Palestinian and Israeli representatives travelled from November 26. to December 02. to Brussels and Berlin. The delegation used this opportunity to introduce European and German stakeholders to the findings of a pre-feasibility study and to secure their institutional, political and financial support for necessary follow up projects. The delegation encountered a lot of interest for the out-of-the-box approach and received valuable impulses for the continuation of their efforts.
December 3, 2017 Ordering Information

Jordan, the Palestinian Territories and Israel are part of one of the most water scare regions of the world. The countries are facing already today similar challenges in the fields of water and energy. The expected impact of climate change with lower amounts of precipitation, continuous population growth and refugee movements will put the water and energy security of the whole region under additional pressure. Water and energy are thus developing to one of the most crucial factors in the regional security structure.

This worrying trend can be contrasted with technological advancements in the areas of seawater desalination and photovoltaic power generation. Israel has increased its share of desalinated water since the inauguration of its first plant in 2005 to almost two thirds of its domestic consumption. The Palestinian Territories and Jordan are developing ambitious plans of their own for seawater desalination but lack coastlines close to most of their population centers. In contrast, the Jordanian desert offers vast open spaces with optimal conditions for the installation of solar power plants.

These variables point towards the potential benefit of regional cooperation, a possibility that is also recognized by decision makers across the region. However, political tensions turn such cooperation into a challange. Without negotiations between Israelis and Palestinians and without the willingness to make concessions, a resolution of the Middle East conflict is not in sight. Also the peace agreement between Jordan and Israel is frequently challenged, following an incident at the Israeli embassy in Amman the bilateral relations are currently under close scrutiny. Such a heated political context turns cross-border activities also into a challenge for the civil society.

The Konrad-Adenauer-Stiftung cooperates since 2015 with EcoPeace Middle East to strengthen cooperation in the water- and energy-sector. Founded in 1994 by Jordanian, Palestinian and Israel environmental activists, EcoPeace is one of the few local organizations that seeks to increase regional cooperation in these crucial fields. During the past three years, both organizations conducted a trilateral Water-Energy Nexus study that takes a closer look at the technical, economic and political viability of a large scale swap of desalinated water from the Mediterranean coast with renewable energies from the deserts of Jordan. The findings indicate that the utilization of comparative advantages in these areas would be beneficial to all three parties. The close incorporation of representatives from the public, private and civic sectors throughout the research process furthermore demonstrates the willingness of these actors to engage in the planning of such a regional approach.

In the framework of a KAS study and dialogue program, a joint delegation of Jordanians, Palestinians and Israelis travelled to Brussels and Berlin between November 26 and December 02. They used this opportunity to illustrate to European and German representatives that regional cooperation in selected policy fields is both possible and of great importance, despite the current political tensions. The delegation furthermore sought to garner institutional, political and financial support from stakeholders to support the countries of the region in the continuation of the project. In a next step, the findings of the pre-feasibly study would need to be confirmed and further elaborated by a full feasibility study. In addition, a pilot project is planned in which a small to medium sized solar power plant on Jordanian soil will deliver renewable energy across the border to the Israeli grid.

The viability of such a regional approach was demonstrated by the seniority and the diverse background of the delegation's members. EcoPeace was represented by its three co-directors Munqeth Mehyar (Jordan), Nada Majdalani (Palestine) und Gidon Bromberg (Israel). Other high-ranking participants included Oded Eran, the former ambassador of Israel to the EU and NATO, Rebhy El Sheikh, Deputy Minister of the Palestinian Water Authority, Joseph Draznin, executive director of the Israeli Ministry for Regional Cooperation and Basim Saleh, managing partner at the Jordanian company Greentech. The delegation was accompanied by Marc Frings, resident representative of KAS Palestinian Territories.

In Brussels, the delegation had meetings with international financial institutions such as the EIB and the EBERD, representatives of EU institutions such as DG NEAR, and civil society organizations. Following Brussels, the delegation had meetings in Berlin at the foreign service, with members of parliament and with representatives from the civil society. The program in Brussels and Berlin was complemented with public events during which the findings of the pre-feasibility study were introduced to expert audiences. In Brussels, the delegation had the great honor to discuss the Water-Energy Nexus during a debate in the European Parliament that was hosted by MEP Elmar Brok. The event in Berlin two days afterwards took place at the KAS Academy and was directed primarily at representatives from relevant economic sectors.

At the end of the visit the delegation was able to draw a positive conclusion. Given the dramatic forecast in terms of energy and water needs in the region, the possibly game-changing character of a regional Water-Energy Nexus was acknowledged by all discussion partners. Positive impulses and signals were also received regarding the possibility of financial support from international institutions. EcoPeace Middle East and the KAS office Palestinian Territories will utilize these insights during the coming months to secure international support for a full feasibility study and the envisaged pilot project.

Representative for the positive feedback throughout the study and dialogue program are the words of MEP Elmar Brok, who hosted the event at the European Parliament. While not being able to attend the event because of changes in his schedule, he made the effort to address the audience in a strong video message. In his words, the Water-Energy Nexus is a subject of "utmost importance" that has the potential to lay the groundwork for regional cooperation, peace and prosperity, much as coal and steal formed the backbone of the European project. 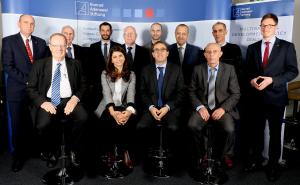 The members of the delegation