The Gaza crisis has been closely monitored by the world, but for Palestinians it became a reason for bipartisan solidarity that was visible in demonstrations inside the West Bank, East Jerusalem, Palestinian refugee camps in neighboring Arab countries and worldwide.
November 22, 2012 Ordering Information

The differences between Fatah and Hamas had stalled the reconciliation deal achieved in May 2012. Would the Gaza crisis in November 2012 bring both parties together again? This report will focus on the reactions of Palestinian citizens, media and politicians to the recent Gaza crisis. These reactions manifested a strong sense of commonality in spite of political rivalries, national division, and the separation of the Gaza Strip from the West Bank.

AFP published a report on November 20, 2012 entitled „Rival Palestinian factions unite over Gaza“ which covered a demonstration in Ramallah of 1000 Palestinians. Among the crowd were Fatah, Hamas and Islamic Jihad top seniors who were chanting “Unity” at Ramallah’s Manara Square. Fatah’s Jibril Rajoub said “From here, we announce with other (factional) leaders that we are ending the division”. Top Hamas leader Mahmud al-Ramahi told the crowd: “Whoever speaks about the division after today is a criminal.”

On November 14, 2012 the Reuters news agency, referring to a Palestinian official in Egypt who was quoted by Egypt's news agency MENA, reported that Palestinian Authority President Mahmoud Abbas had called for an urgent Arab League meeting on Israel's strikes against Gaza.

During the press conference held in Cairo on November 21, 2012 after a ceasefire had been agreed upon between Israel and Hamas, Hamas Leader Khaled Meshaal said on al-Jazeera TV that the Palestinians will end division soon, and will come together for reconciliation.

To sum up, current coverage seems to indicate that a growing number of Palestinians of different affiliations believe that reconciliation is the only option they still have after all other alternatives have unsuccessfully been exhausted. 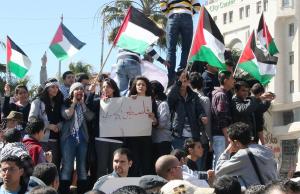