The event was attended by around 120 guests, amongst them religious dignitaries, academics, students and journalists. The word “Wasatia” derives from the Quran and means “moderation” or “balance”. The aim of Al-Wasatia is, through workshops, seminars and conferences, to promote a liberal conception of Islam that is compatible with democratic values.

After a brief opening speech by the founder of Al-Wasatia, Prof. Mohamed Dajani, the attendees were welcomed by Sheikh Yusuf Ideis, chairman of the Shari’a-Courts within the Palestinian Territories, and Sheikh Khamis Abedeh, member of the Department of Palestinian Imams at the Ministry of Religious Affairs. Felix Dane, Resident Representative of the Konrad-Adenauer-Foundation in the Palestinian Territories, mentioned the similarities between Al-Wasatia and the CDU (Christian Democratic Union), a German party whose political concepts also result from religiously motivated moral values. Afterwards he congratulated Al-Wasatia for their official registration.

Thereafter several speakers presented their conference papers on topics like “Wasatia in Political Science”, “Religion and Live”, “Moderation and Tolerance in Islam” and “Wasatia and the Others: Communication and Dialogue”. They spoke about the necessity of recognizing the various political and religious views of different groups and political parties and to try to find some common ground on which to base. Two other important subjects were the “Mother’s Day”, celebrated by Palestinians on the same day, and the “Rights of Woman in Society”. One of the speakers, who talked about this topic, was a representative of the Palestinian Interior Ministry.

Mohammed S. Dajani Daoudi and Robert Satloff: Why Palestinians Should Learn About the Holocaust, in: The International Herald Tribune, 30 March 2011
More about this topic 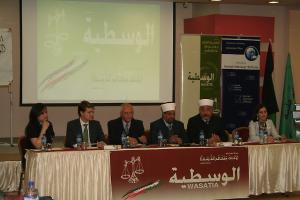 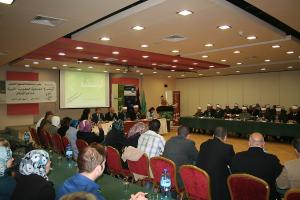 Some of the 120 guests of the conference