Palestine in a Changing Neighborhood

In partnership with the Konrad-Adenauer-Stiftung, the Ibrahim Abu-Lughod Institute of International Studies (IALIIS) organized a series of lectures to discuss the pressing topic of “Palestine in a changing Neighborhood”.
August 10, 2018 Ordering Information

The lectures were delivered by three experts; Dr. Ahmed Azem, Professor at Birzeit University, Wissam Rafidi, a researcher and lecturer at Bethlehem University, and Dr. Ibrahim Frihat, an international conflict resolution professor at the Doha Institute for Graduate Studies and Georgetown University.


In the first lecture, Dr. Azem and Mr. Rafidi focused on the future of the Palestinian issue in the context of the so-called "Deal of the Century" that has been announced by the Trump Administration. The next two sessions presented by Dr. Frihat tackled the Gulf Crisis and Qatar’s foreign policy as well as the Iran-Saudi proxy war and how it is affecting the politics of the region.


The three researchers had different points of views about the deal of the century, which speaks to the amount of controversy and ambiguity surrounding this issue.


Mr. Rafidi said that the deal of the century has already started to materialize through the transfer of the US Embassy from Tel Aviv to Jerusalem and the expansion in settlement activities across the West Bank and the isolation of the Gaza Strip through humanitarian aid.


Meanwhile, Dr. Azem said that the deal is an illusion created by Arabs and Palestinians and was fought by Israelis, arguing that Arabic news outlets started using the term and that researchers would not be able to find any American or Israeli sources using it.


Dr. Azem said that the first mention of the term goes back to the time when the Egyptian President Abdel Fattah El-Sisi met with US President Donald Trump, and said “If you could close this deal, then it would be the deal of the century.”


On the other hand, Dr. Frihat gave an overview of the Qatari foreign policies and the changes in the arena following the siege of Qatar imposed by the neighboring countries. He explained the Saudi-Iran proxy war and its effects on Arab countries in the regions, most specifically Palestine.


He said that he personally believes that the “ultimate deal” would ultimately fail, but without causing more devastation in the region.


Answering a question from the audience about the ideal Palestinian position amid these ongoing developments and alliances, Dr. Frihat said the Palestinian Authority’s best strategy is to remain neutral in this ongoing conflict in order to protect the Palestinian cause from being compromised or used as a pawn.


Over 80 Birzeit students, professors and visitors attended the lectures each day and were given the chance to ask questions and share insights with the remaining participants.

Lecture: The Deal of the Century and the future of the Palestinian issue 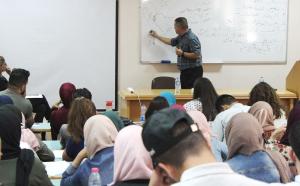 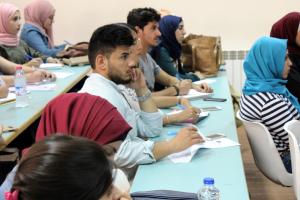