The Role of Third Parties in Securing Israeli-Palestinian Peace

In cooperation with the Israel-Palestine Center for Research and Information (IPCRI), the Konrad-Adenauer-Stiftung (KAS) Ramallah organized a conference about the role of third parties in securing Israeli-Palestinian peace. The conference aimed to give an insight to the prospects and obstacles of a NATO or UN peacekeeping mission in the Palestinian territories and to discuss possible solutions.
April 19, 2011 Ordering Information 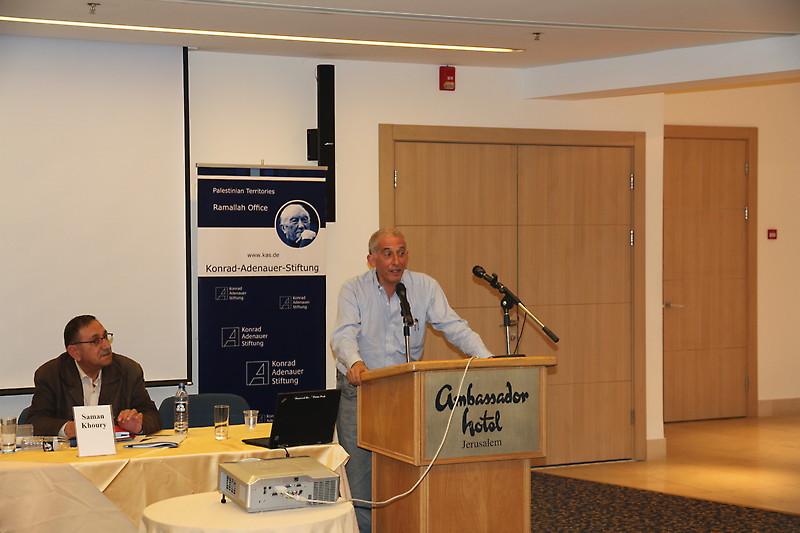 Felix Dane, the head of the Konrad-Adenauer-Stiftung in the Palestinian Territories, opened the conference together with the two co-directors of IPCRI, Dr. Gershon Baskin and Hanna Siniora. Around 80 Israeli and Palestinian attendees from politics, academia and media as well as representatives of international organisations in Jerusalem listened to the remarks of the various Israeli, Palestinian and international security experts.

Major General (ret.) Robert Gordon, senior adviser to the United Nations Department of Peacekeeping Operations (UNDPKO) and former commander of the United Nations Mission in Ethiopia and Eritrea (UNMEE), explained in a thematic introduction the complex challenges faced by multinational peacekeeping missions. He emphasized that the existence of a peace agreement was a necessary condition for any UN peacekeeping mission. In a context of continuous violence and hostility, however, one would need to rely on NATO forces and their higher military efficiency. He dismissed the idea of reaching a conflict resolution through military means alone.

Dr. Ron Pundak, Israeli Director of the Peres Center for Peace, explained afterwards that the presence of a third party is essential for monitoring the compliance with an Israeli-Palestinian peace agreement. However, he rejected the idea of deploying an UN peacekeeping force due to Israel’s bad experiences with the UN in the past. Instead, he suggested an international non-UN peacekeeping force similar to the Multinational Force and Observers (MFO) serving in the Sinai Peninsula. Walid Salem, director of Panorama, the Palestinian Center for the Dissemination of Democracy and Community Development, favored the involvement of a third party not only in terms of securing a peace agreement and protecting borders. The respective third party should also participate in the drafting of the peace agreement. Furthermore, he made clear that the Palestinians would accept a third party’s involvement only if its presence served the implementation of a final status agreement.

Dr. Efrat Elron, senior fellow at the International Peace Institute, enriched the discussion with lessons learned from the United Nations Interim Force in Lebanon. She referred, inter alia, to the effects of intercultural interoperability and leadership on mission effectiveness.

Saman Khoury, director of the Peace and Democracy Forum, and Jerusalem expert Daniel Seidemann spoke about the difficulties of securing peace in Jerusalem. Saman Khoury stressed the need for interreligious sensitivity among peacekeepers deployed in Jerusalem. Daniel Seidemann drew particular attention to the peacekeeping potential resulting from the presence of a third party in the Old City of Jerusalem. Since the Old City could not be territorially divided between the conflict parties, it would require a responsible third party in order to keep the peace.

In the end, General (ret.) Shlomo Brom, senior research associate at the Jaffee Center for Strategic Studies and the Institute for National Security Studies, explained the need to secure the external borders of a future Palestinian state through a third party. The future Palestinian government must be helped to prevent arms smuggling and the infiltration of foreign fighters. According to Brom, a far-reaching UN mandate was necessary in order for the peacekeeping force to be able to intervene militarily and efficiently in the event of an attack.