An Overview of the Rule by Decree on Social Security

On 11 of May the Konrad-Adenauer-Stiftung and the Institute of Law (IoL) of Birzeit University organized a legal encounter, entitled "An Overview of the Rule by Decree on Social Security". Delivered by Mr. Muhsen Abu Ramadan, Development Researcher, the event brought together members of the legal community, academics, human rights activists, and interested individuals.
June 10, 2016 Ordering Information

Abu Ramadan criticized that the new Law by Decree on Social Security No. 6 of 2016 wasn’t necessary, as it would have been better to consolidate existing laws like 2000 Labor Law and 2005 Law on Public Retirement. Furthermore consultations were not held with relevant institutions or civil society organizations, particularly in the Gaza Strip, which resulted in confusion. An adequate redress to employees in civil society organizations and private sector is not provided and the Law doesn’t state that the government should provide sufficient guarantees. Supplemental insurance for senility is one of the most controversial aspects. According to the Rule by Decree on Social Security, this insurance covers eight times more than the minimum wage.

In addition the new law discriminates working women, as they do not have the right to a maternity leave unless they subscribe to maternity insurance for six months prior to delivery. Another aspect is that it doesn’t provide for personal, family or cost of living allowance. It does not include the system of defined contributions. In addition to the different percentage of calculated pensions, most provisions on coverage and due payments vary from the Public Retirement Law.

In the following discussion the issue was raised that the Rule by Decree on Social Security does not provide any mechanisms to guarantee properties of the Social Security Fund, whereby entitlements and acquired rights ensured by the Public Retirement Law and Labor Law may be lost. Finally, discussants recommended that an inclusive community dialogue be launched to produce a more equitable law, which safeguards workers’ rights. Rather than repealing the Law by Decree, what is required is to maintain an informed, professional process to ensure a minimum decent standard of living for workers. 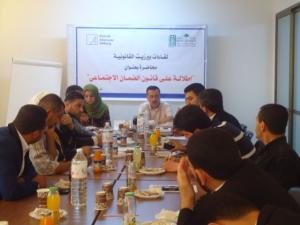 Legal Encounter organized by the Institute of Law