On December 21, 2017, DIYAR and KAS Ramallah presented the study "Palestinian Christians: Emigration, Displacement and Diaspora". The publication builds partly on a survey among Christians and Muslims. As the first of its kind, the survey examines in detail the causes of Christian migration. The conference was broadcasted live on Palestinian television (MAAN TV).
December 22, 2017 Ordering Information 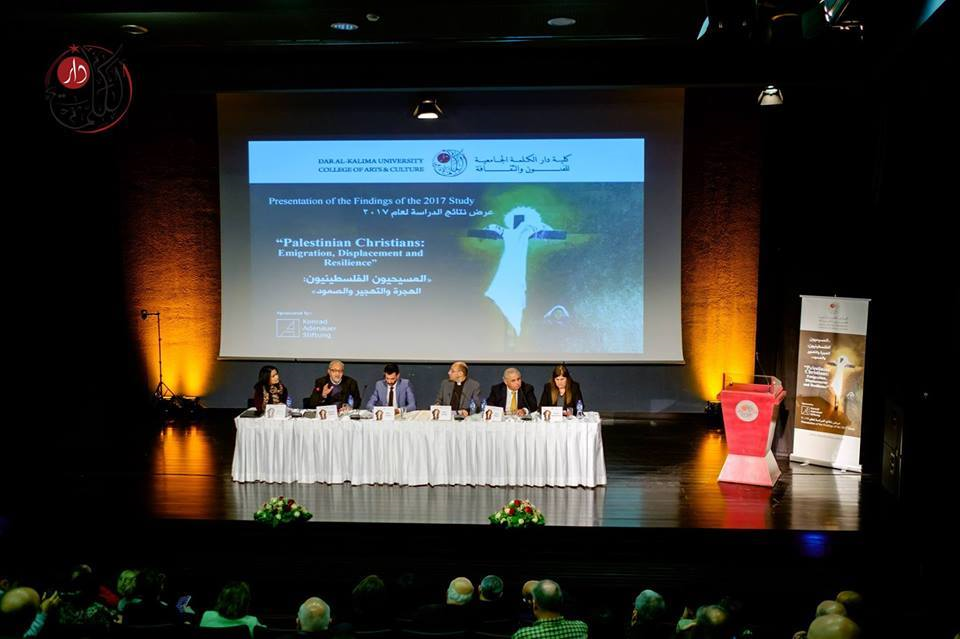 Dr. Mitri Raheb, president of the Dar al-Kalima University College of Arts and Culture, discussed during his presentation five waves of migration that compelled Palestinain Christians during the past 100 years to leave their homeland. The Palestinian Authority's 2007 census suggests that there are still around 50.000 Christians remaining in the West Bank, the Gaza Strip and East Jerusalem. While the absolute number of Christians in Israel and Palestine increases, their share in the societies decreases. More recent statistics will follow soon, based on a new Palestinian census that is currently being carried out.

Dr. Varsen Aghabekian presented the results of a study conducted in the Palestinian Territories during the current year. Key findings include:

In her research paper, Dr. Hadeel Fawadleh (Birzeit University) focused on the migration experience of Palestinian Christians in the United States. Dr. Bernard Sabella, a member of the Palestinian Legislative Council and a Christian from Jerusalem, shed light on the network of relationships between the local churches of the Holy Land and Europe. This network, and the normative stance of European organizations in particular, offers many entry points for an intensified dialogue. This dialogue should also address the Palestinian context and the political challenges. Considering the empirical findings, Marc Frings, head of the Konrad-Adenauer-Stiftung in the Palestinian Territories, noted that Christians in their minority role are inevitably living an incoherent life. This expresses itself both in the migration tendencies and in a retreat from the public sphere.

The study is available at DIYAR.