From Camp David 2000 Until Today

In cooperation with the DED (German Development Administration) and IPCRI (Israel-Palestine Center for Research and Information), the Konrad-Adenauer- Stiftung (KAS) arranged a conference concerning the status quo of the peace process between Israel and Palestine, ten years after peace negotiations failed in Camp David II. The conference aimed at examining the past ten years of Israeli-Palestinian relations, to detect mistakes of both parties, as well as misconceptions of the international mediators during the different stages of negotiations and draw conclusions for the future.
October 22, 2010 Ordering Information

Felix Dane, director of the Konrad-Adenauer-Stiftung Ramallah opened the conference together with Rudolf Rogg, regional director of DED Palestine and Jordan, and with the two co-directors of IPCRI, Hanna Siniora and Gershon Baskin.

All the speakers were involved at different times into the negotiations. Among them Nabeel Shaath, former Palestinian Foreign Minister and Chief-Negotiator and Pini Meidan, political advisor of Prime Minister Ehud Barak during Camp David II.

Clayton Swisher, correspondent at al-Jazeera and author of the book titled “The Truth about Camp David” triggered a lively debate with his analysis of the mistakes committed at Camp David II. In 2000, being an FBI Special Agent, Swisher was responsible for the personal security of US-President Bill Clinton and Secretary of State, Madelaine Albright. Thus, he had the possibility to gain a precise insight into the official negotiations and the private talks between Clinton, Barak and Chairman Arafat. Swisher partly disagreed with the alleged Israeli narrative that claims that Arafat rejected Israel’s “generous” offer to the Palestinians back in 2000 without presenting a counter proposal. However, Swisher also criticized certain inflexibility on the part of the Palestinian leadership. Yet above all, he criticized former US-President Clinton, who had publically blamed Arafat after the collapse of the negotiations in Camp David, thereby lending a hand to the Israeli conviction, that there was never any real partner on the Palestinian side. The Israeli peace movement has not yet recuperated from this blow until today.

The first discussion panel was dedicated to the analysis of Israeli-Palestinian negotiations since 1993. Ron Pudak, former member of the Israeli negotiation team during the Oslo Process discussed with Afif Safieh, former ambassador of the PLO to Moscow, London and Washington. Both speakers emphasized the positive aspects of the negotiations and the success achieved until now, like the mutual recognition of the legitimate political aspirations of both parties and the concept of territorial compromises. This recognition already had occurred during the Oslo Process and had been unthinkable within the previous decades of the conflict. However, this process, having started positively had been destroyed by radical forces.

Furthermore, there was a perceptible disappointment of Mr. Safieh about the destructive policy of Israeli decision makers towards the Palestinian people. This policy would only fuel the hatred and the circle of violence, claimed Mr. Safieh.

In the second panel the former Palestinian Foreign Minister and Chief Negotiator, Nabeel Shaath, discussed with Pini Meidan, former political advisor to Prime Minister Ehud Barak about the present state of the current negotiations. Meidan advocated a fair „lose-lose-situation“, pushing both parties to make painful compromises, so that no leader would lose face vis-à-vis his own constituencies.

The third and last panel dealt with security aspects of the peace negotiations. Itamar Yaar, former Deputy Head of the Israeli National Security Council and General of the Israeli Army and Yaser Dajani, former Policy Advisor on Security to the PLO Negotiation Support Unit and Gershon Baskin, Co-Director of IPCRI, analyzed the security needs of both people. Itmar Yaar emphasized extensive security guarantees, being demanded by the Israeli side. Especially during the first years after the signing of a peace agreement, the strict seperation of both people by a barrier should still be maintained. All participants agreed that an internationally-led security force, operating on Palestinian territory, could assure the security and stability needed during the first years after a peace agreement. 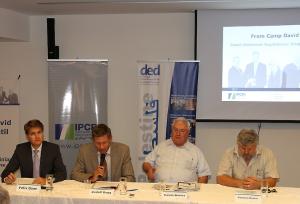 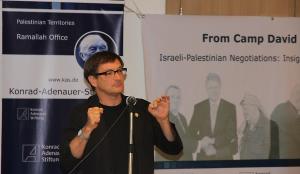 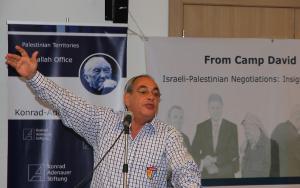 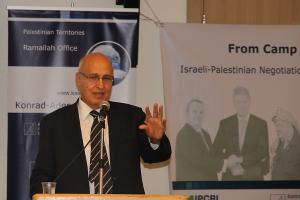 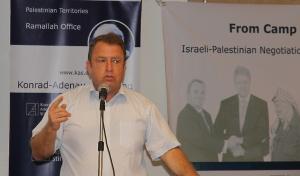