Key officials from the provinces of Oriental Mindoro, Cebu, and South Cotabato have signed an integrity pledge, declaring themselves for integrity and transparency on November 19 in Tagaytay City.
November 19 - 20, 2014

Key officials from the Provinces of Oriental Mindoro, Cebu, and South Cotabato have signed an integrity pledge with the Konrad-Adenauer-Stiftung (KAS), the European Chamber of Commerce of the Philippines (ECCP), the Centrist Democracy Political Institute (CDPI) and local government associations, declaring themselves for integrity and transparency on November 19 in Tagaytay City.

From November 19 to 20, officials from the provinces of Oriental Mindoro, Cebu, and South Cotabato have come together with KAS, ECCP, CDPI, and representatives of the local government associations to sign an integrity pledge through which they commit themselves to integrity and transparency for effective investment registration through monitoring and inclusion of uncorrupt structures. The pledge has been designed by the EU co-funded Project I4J (Integrity for Job Creation), which aims to include local government units (LGUs), civil society, and local business as key players for clean administrative procedures. From here on, provincial governments will only engage with third parties who have existing internal control systems and commit themselves to the integrity pledge. In separate events, the pledge will be signed by the remaining parties of the pilot cities and pilot municipalities.

Opening remarks at the event in Tagaytay were given by the Vice-Governor of Oriental Mindoro, Hon. Humerlito A. Dolor, Mr. Hans Farnhammer of the Delegation of the EU to the Philippines, and Mr. Benedikt Seemann, the Country Representative of KAS Philippines. Mr. Henry Schumacher, Executive Vice-President of the ECCP and Ms. Cris Giangan, Project Manager of I4J, told the audience about the project and its objectives. In a roundtable, Vice-Governor Humerlito A. Dolor, Governor Hilario Davide III (Cebu), and Governor Daisy Avance-Fuentes (South Cotabato) explained their contributions to the project. The signing of the pledge by the project partners, KAS, CDPI, and the League of Provinces with the Pilot Province Governors concluded the day.

The Project Partnerships for Integrity and Jobs is co-funded by the European Union and the German Federal Ministry for Economic Cooperation and Development through KAS. It aims to include LGUs as key players for clean administrative procedures into the Integrity Initiative, set up by the ECCP and the Makati Business Club. It recognizes the role of LGUs as a sustainable network for self-obligation and monitoring transparent and uncorrupt structures and procedures. Civil society, small business leaders, and potential investors have also been included in the project, as beneficiaries. It started in January 2014 and will last until December 2016. Currently it is in its pilot phase, which implements the integrity initiative in three cities, three municipalities, and three provinces across Luzon, Visayas, and Mindanao. 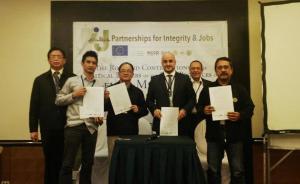