Kusog Mindanaw is a platform of dialogue among Mindanao leaders and thinkers since 1995. Its advocacy has focused on the region's equitable share in the budget and representation in national government, good governance, inclusive growth, and sustainable peace and development. The pandemic-postponed annual conference will take place virtually for the first time in 26 years from 18-22 October 2021. This year’s theme is “Co-Creating the Kusog Mindanaw Agenda in the 2022 Elections.”
October 18 - 22, 2021 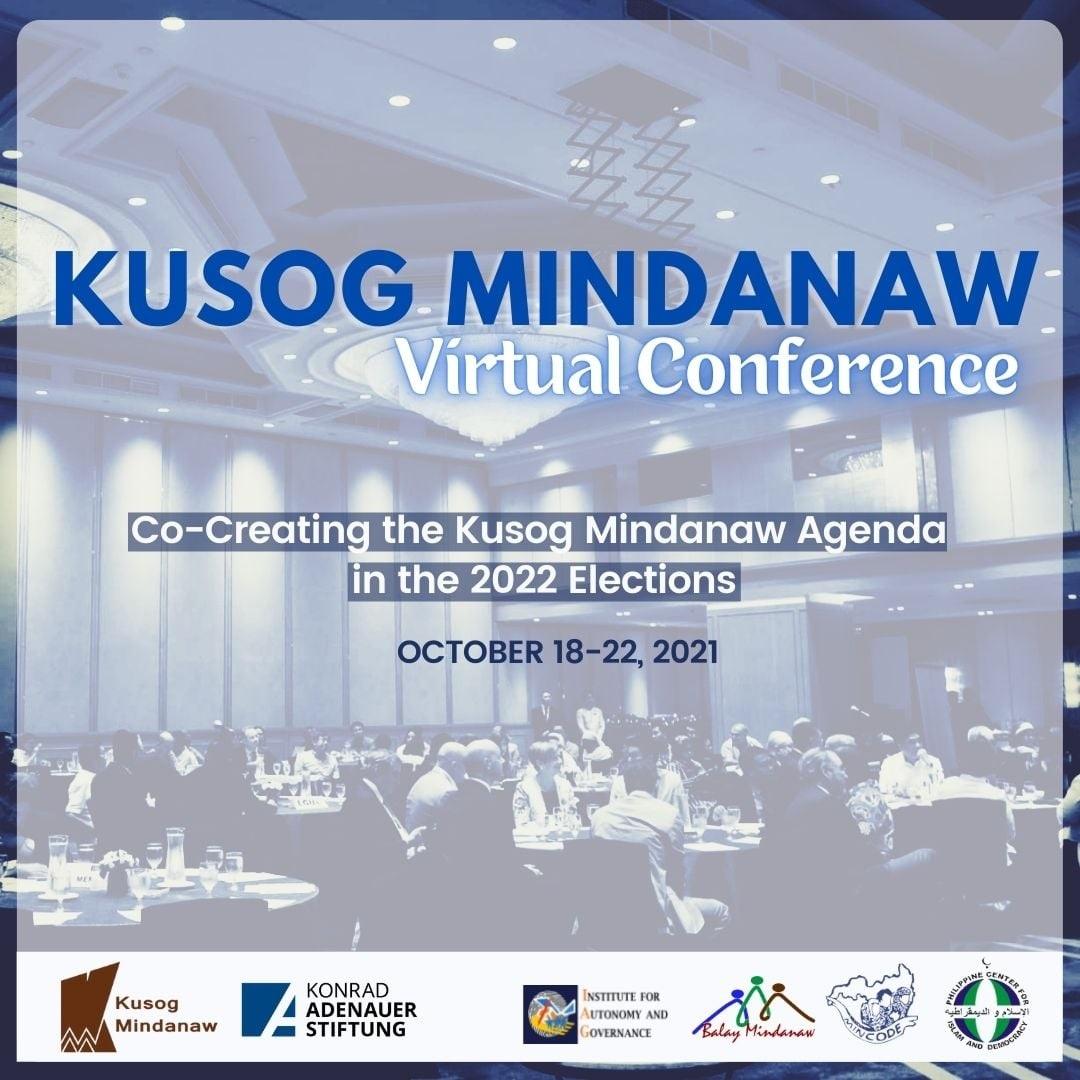 If you registered via Zoom as participant, please find in your email the full conference agenda and schedule. Except for workshops and breakout sessions, the Kusog Mindanaw 2021 Conference will be livestreamed on the Facebook page of IAG at http://facebook.com/iagorgph.

Kusog Mindanaw conveners made up of the Institute for Autonomy and Governance (IAG), Mindanao Coalition of Development NGO Networks (MINCODE), Philippine Center for Islam and Democracy (PCID) and this year’s conference chair, Balay Mindanaw Foundation Inc. (BMFI), will deliver the opening remarks.

This year’s conference facilitator is Ms. Mags Maglana, an independent consultant who has been working with multi-stakeholders involved in Philippine development, peace and security, and governance at various levels for the past 30 years.

For the first panel discussion, Senator Aquilino "Koko" Pimentel III, Atty. Randolph Parcasio of the Consultative Committee to Review the 1987 Constitution, and Commissioner Bai Norhata Alonto of the Social Security System are confirmed to speak on the topic “Federalism and Equitable Wealth and Power Sharing.”

The subject of federalism has been a staple of Kusog Mindanaw conferences through the years. The idea of a system of government that shares more power and resources to the regions has captured the imagination of advocates and spurred spirited discussions on the various models of federalism and related concepts of devolution and decentralization—even more complex processes of constitutional reforms and charter change.

Further developments in the autonomy of the Bangsamoro—the Bangsamoro Organic Law (BOL), in particular—have lent more depth to the discussions. Not long ago, there seemed to be a converging roadmap putting the BOL, charter change and federalism as effective complementary tools for implementing autonomy as a key political reform for sustainable Mindanao peace and development.

In retrospect, the nation’s closest shot at federalism came in 2016—thanks to the popular Rodrigo Duterte, a fellow Mindanawon, who anchored his electoral campaign to the shift to federalism. The official position of the Duterte administration on federalism was conveyed to Kusog Mindanaw two years ago during the 2019 conference.

“For one Mindanao will surely have a greater influence and control in running and benefitting from its development. There will be guaranteed representation of Mindanao or Bangsamoro senators through mechanism of regional representation in federalism. That way, you can better mainstream Mindanaoan economic and policy interest. Also, the peace being gained here will be even more sustained by institutionalizing regional autonomy. The country needs a major constitutional reform to address social ills like rampant corruption and widespread poverty among Filipinos.”

As the Duterte presidency winds down and the Philippines is to elect a new set of leaders in May 2022, Kusog Mindanaw takes stock of Mindanao’s federalism agenda and how far Mindanao has gone in its advocacy for a greater share of national power and wealth. It will explore the state and future direction of the Mindanao’s agenda for equitable share in the nation’s wealth and leadership through charter change, federalism, autonomy and decentralization.

The passage and ratification of the Bangsamoro Organic Law (BOL) had breathed a new life to the Bangsamoro autonomy, ushering fresh prospects for sustainable Mindanao peace and development. The promise of new era however is not without peril. As of September 2021, the government program to decommission the Moro Islamic Liberation Front’s 40,000 combatants has a backlog of 21,000 combatants. The delay is due to quarantine controls because of the COVID-19 pandemic.

Meanwhile, the Abu Sayyaf Group and other local terrorist groups, communist insurgency, violent extremist ideology and the far-reaching consequences of the Taliban resurgence continue to pose challenges to the country’s stability.

The Armed Forces of the Philippines cited significant gains from the first six months of 2021. This include 114 Abu Sayyaf Group members, 124 members of the Bangsamoro Islamic Freedom Fighters, and 40 Dawlah Islamiya members who were all either killed, captured or have surrendered. All in all, a total of 372 members of communist terrorist groups (CTGs), including 80 high-value individuals and four CTG finance officers were neutralized in 213 operations during the first six months of the year.

Then chief of Western Mindanao Command Lt. Gen. Cirilito Sobejana underscored during the Kusog Mindanaw 2019 gathering the need for convergence and a shared concept of security. Good governance must be felt by the public, General Sobejana, who retired this year after briefly serving as Armed Forces of the Philippines chief of staff, said back then.

The third day of Kusog Mindanaw will begin with a message from the conference chair and Balay Mindanaw president, Mr. Charlito “Kaloy” Manlupig, and a keynote from Mr. Edtami Mansayagan, former commissioner of the National Commission on Indigenous Peoples (NCIP).

Mindanao accounts for 36 percent of the Philippines’ farm area and 43 percent of the country’s total farm produce. The southernmost group of islands has been called the food basket. Yet, 2018 poverty figures placed four of Mindanao’s provinces in the top five poorest provinces in the country. Among the 17 regions, BARMM placed last in terms of per capita GRDP/GRDE, according to data from 2018 to 2020. In terms of regional connectivity, only 49.5 percent of Mindanao’s roads are paved.

The coronavirus pandemic has weighed down on economic activities and rollout of infrastructure projects and resulted in the slowdown of economic growth.

Accelerating the vaccination rollout, managing risks better, and implementing the economic recovery program are the government’s three key strategies to reach the country’s growth targets for 2021 and 2022, according to the National Economic and Development Authority (NEDA).

What more can be done to unlock short-term gains and generate more jobs in the face of the pandemic? How do we leverage in the long term Mindanao’s economic potentials and strategic position in the ASEAN growth corridor to hasten poverty alleviation?

Climate change and the coronavirus pandemic are two of the biggest challenges of our time.

The Philippines ranked fourth in the Global Climate Risk Index (CRI) list of 10 countries most affected by extreme weather events, both in terms of the fatalities as well as the economic losses that occurred, from 2000 to 2019. Mindanao is especially vulnerable if this trend continues as its agricultural sector will surely suffer from extreme floods or long droughts.

Meanwhile on the COVID-19 front, the Philippines dropped to No. 53 (as of Sept. 29, 2021), the lowest spot in Bloomberg’s Covid Resilience ranking. The report cited the country’s limited access to vaccines and fragmented response.

How can Mindanao rise to the challenge of enhancing its resilience and recovery strategies? What lessons has it learned about vulnerabilities and responses to disastrous calamities? What can it learn from indigenous practices that have withstood the test of time? Or have indigenous communities only become more vulnerable because of these challenges?

The synthesis and results of the workshop and breakout sessions from Day 1 to Day 4 will inform the drafting of the Kusog Mindanaw Agenda for 2022 Elections which will be presented on Day 5, October 22.