Following an invitation from Konrad-Adenauer-Stiftung a group of young politicians of the “Centrist Democratic Youth Association” in the Philippines visited Berlin for one week in August 2013.
August 25 - Sep 01, 2013

All insights and newly acquired knowledge gained from the study trip to Berlin will very likely be usefuk for the work of such party-political youth work during the upcoming local and national elections. After the elections, those CDYAP executives from all regions participating in the study trip to Germany shall receive further trainings and attend more seminars in cooperation with CDPI. This shall enable CDYAP to take up the tasks of supporting and controlling the first elected CDP representatives at local and national level with their programme-based consequence and proximity to the citizens.

Among other meetings, the group was able to attend the following lectures and exchange with the following contacts during their study visit to Germany:

- Dr. Karsten Grabow, Coordinator for Political analyses and political parties, Department for Politics and Consulting (Political Dev’t in the Philippines)

- Lecture on Self Government by Mr. Tobias Montag, Coordinator for Domestic Policy, Department for Politics and Consulting

- Mr. Gert Olav Göhs : Development of the CDU and its participation in international umbrella organizations

- Ms Andrea Bischoff, Deputy head of the Secretariat of the Defense committee: Tasks and Function of the Defence Committee of the German Parliament

- Mr. Danny Freymark, Spokesman for environment policy of the CDU parliamentary group in the chamber of Representatives of Berlin 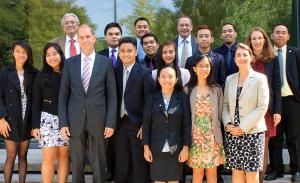