At the crossroads between Sub-Saharan Africa, North Africa and the Arabian Peninsula, Sudan is keeping pace with the political developments of the entire region. Yet, little studied, the country is not very visible to research institutions and think tanks due to difficult access to information. Faced with this, the Regional Program Political Dialogue South Mediterranean of the Konrad-Adenauer-Stiftung decided to open its geographical scope to Sudan and develop more knowledge about this country through this serial publication entitled "Spotlight on Sudan".
October 23, 2020 Ordering Information

The recent developments that have brought Sudan to the forefront, have also highlighted the extent to which this country of 42 million inhabitants has its destiny linked to the countries on the southern Mediterranean. Indeed, from the sending of Sudanese militiamen to Libya to the discussions on normalization with Israel through the numerous transactions with the Egyptian neighbor, Sudan is a country that impacts the southern Mediterranean in a deep and constant way. Furthermore, in addition to the internal ongoing conflicts, Sudan has found itself in the middle of the Nile river dispute between Ethiopia and its north African neighbour Egypt.

In this sense, this edition of Spotlight on Sudan, under the theme "Sudan’s International Relations in Regime Change", will focus on these developments and its impact on the country’s neighbours and the geopolitical situation. 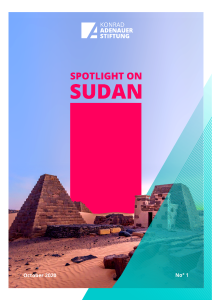