The book provides insight into climate change governance in ASEAN with regard to mitigation, adaptation, and climate finance.
June 13, 2022 Ordering Information

With 4,340,700 km2, Southeast Asia is home to about 678 million people, approximately 8.58 per cent of the global population (Worldometers 2022). Compared to the 1960s, the population has grown more than threefold from slightly above 214 million to 670 million in 2021, 50 per cent of whom are urban settlers (Worldometers 2022). With abundant resources from marine to rivers and land, a large majority of the population rely on their local resources for subsistence and income generation ranging from agriculture and fisheries to non-timber forest product collection. Forest cover in Southeast Asia accounts for nearly 15 per cent of the world’s tropical forests, and supports millions of lives of the ASEAN population and serves as at least four of the 25 globally important biodiversity hotspots (Estoque, et al. 2019).

The frequency and intensity of climate change-related natural disasters are rising, and are having significant impacts on the economy and society in Southeast Asia. Southeast Asia’s vulnerability to climate change impacts is largely due to its long coastline and concentration of economic activities in the coastal areas, high level of poverty, resource-based sectors, particularly agriculture, which are prone to the impacts of climate change, and exposure to frequent natural disasters including typhoons, floods, and droughts (ASEAN Cooperation on Environment 2022a). Among the 20 most affected countries in the world, five of them are from Southeast Asia, including Myanmar (3), the Philippines (5), Vietnam (9), Thailand (13), and Cambodia (19) (Sandu, et al. 2009). The collective effects on agriculture, tourism, energy demand, labour productivity, catastrophic risks, health, and ecosystems are severe (Sandu, et al. 2009).

With tremendous pressures and existential threats posed by climate change, there have been sustained political will and commitment at the national level of the ASEAN Member States (AMS) to address climate change. ASEAN’s regional climate response and cooperation have been steadily strengthened. Nature and biodiversity conservation, coastal marine environments, water resources management, environmentally sustainable cities, climate change, environmental education and sustainable consumption and production have been prioritised as strategic areas for intervention for environmental management and climate change responses (ASEAN Cooperation on Environment 2022b). The ASEAN Joint Statement on Climate Change to the 26th Session of the Conference of the Parties to the United Nations Framework Convention on Climate Change in 2021 stressed the need to strengthen support for AMS and other developing country Parties to analyse climate risks, formulate and implement adaptation measures, and enhance ambitions for climate change mitigation (ASEAN Secretariat 2019).

Moreover, the institutional structure has been designed to address climate change, including the ASEAN Ministerial Meeting on the Environment, the ASEAN Senior Officials Meeting on the Environment, and ASEAN Working Group on Climate Change (ASEAN Cooperation on the Environment 2022a). The ASEAN Working Group on Climate Change Action Plan focuses on adaptation, mitigation, long-term planning and assessment of National Determined Contributions, climate modelling and assessment, Measurement, Reporting, and Verification (MRV), Green House stocktaking, climate financing, technology transfer, and cross-sectoral collaboration.

Some flagship initiatives include the ASEAN Climate Finance Strategy, ASEAN Climate Change Partnership Conference, the ASEAN Heritage Parks Programme, ASEAN SDG Frontrunner Cities Programme, and ASEAN Eco-Schools and Youth Eco-champion Award Programmes. ASEAN also produces ASEAN State of Environment Reports and ASEAN State of Climate Change Reports to support the evidence-based policymaking process in ASEAN. The ASEAN State of Climate Change Report (ASCCR) provides an overall outlook of the state of play of climate change issues in the ASEAN region. The ASCCR is also a forward-looking report, which includes recommendations on making the transition toward 2030 and 2050 for both adaptation and mitigation, considering ASEAN’s development context and the long-term goals of the Paris Agreement (ASEAN Secretariat 2021). In addition, at the 16th ASEAN Ministerial Meeting on the Environment and the 16th Meeting of the Conference of the Parties to the ASEAN Agreement on Transboundary Haze Pollution, ASEAN agreed in principle to establish the ASEAN Centre for Climate Change in Brunei Darussalam (ASEAN Secretariat 2021).

Recently, most of the AMS made commitments to decarbonise their economies by mid-century and slightly beyond. For instance, Cambodia has set a clear target for carbon neutrality by 2050, while Indonesia has set a net-zero ambition by 2060 (United Nations Framework Convention on Climate Change 2022). In addition, Thailand pledges to reach carbon neutrality in 2050 and net zero emissions by 2065, Thailand is committed to achieving the carbon-neutral goal by 2050, and Singapore has set a goal to halve its emissions by 2050 and achieve net-zero by the second half of the century (United Nations Framework Convention on Climate Change 2022).

With the progress being made, there remain a myriad of challenges for AMS to achieve the commitments as there remain major challenges, from the limited financial and human resources to public behavioural change in regard to waste management and energy conservation practices and technological availability. This may require more assistance from developed countries through multilateral and bilateral mechanisms in relation to financial and technical support and technology transfer, effective interventions and assistance for climate change adaptation and other climate actions. Additionally, collaborations with development partners, international and national non-government organisations, research institutions, transnational and national corporates, and local communities are crucial for Cambodia to achieve its climate goals and develop into a carbon-neutral and resilient society.

The “ASEAN Climate Change Response” book aims to investigate ASEAN efforts in response to climate change and to propose possible future pathways for a carbon-neutral and climate-resilient society. The book will look into the existing legal instruments, existing policies, mainstreaming strategies, funding mechanisms, challenges, and opportunities in Southeast Asia. The book is intended to serve as a solid piece of policy-oriented research, which provides diverse perspectives from policy advisers, researchers, investors, and practitioners.

The book is divided into five parts. Part I has one introductory chapter, setting out the context and providing an outline of the book. Part II focuses on Climate Change Mitigation, consisting of three main chapters, including Chapters 2, 3, and 4. Chapter 2 provides an overview of ASEAN Climate Change Mitigation with the lessons learnt from the forestry sector for global environmental governance, while Chapters 3 and 4 investigate case studies of climate change mitigation in Cambodia and Indonesia. Next, Part III consists of Chapters 5, 6, 7, and 8, focusing on ASEAN Climate Change Adaption. Similar to Part II, Chapter 5 provides an overview of ASEAN climate change adaptation, followed by the case studies of Southeast Asia nations, including Cambodia (Chapter 6), Thailand (Chapter 7), and Vietnam (Chapter 8). Then, Part IV examines the financial mechanism of climate change, and it contains three main chapters, namely Chapters 9, 10, and 11). Chapter 9 reviews the funding mechanisms for climate change at the global and regional level, and the roles of Cambodia’s Chairmanship in 2022, Chapter 10 focuses on the funding mechanism in Cambodia, and Chapter 11 specifically addresses sustainable finance and European Taxonomy. Finally, Chapter 12 concludes the existing efforts, challenges, and opportunities for carbon-neutral and climate resilience in Southeast Asia. 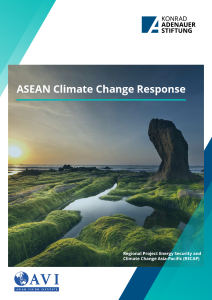