Electricity Generation and Use in Singapore and Kota Kinabalu

Low carbon urban transitions are pursued as means to tackle the challenges posed by climate change to urban energy resource flows and services. Research has, so far, been concerned with accounts as to the what, how and why of these low carbon urban transitions, largely omitting how historical legacies in cities’ energy policies and practices affect today’s transitions. The research project by Dr. Maria Francesch, KAS RECAP's Consultant offers insights into the role of path dependency in the energy development in Singapore and Malaysia.
December 20, 2017 Ordering Information

The paper examines and demonstrates

The paper concludes that energy autarky and energy security are temporally and spatially context-sensitive. Decision-makers, in their pursuit for an energy policy that brings about energy security, environmental sustainability and economic competiveness, should be mindful of such contextual nuances. 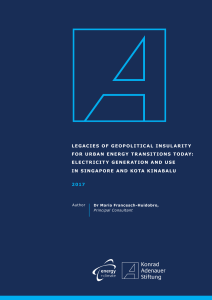