Perception of the Implementation of a Hydrogen Economy in Asia-Pacific

This report summarises the perception of expert insights on the expectations, concerns, and barriers to local hydrogen implementation in nine major countries in Asia-Pacific (APAC) — Australia, China, India, Indonesia, Japan, Malaysia, Singapore, South Korea, and Thailand. These countries represent the nine largest economies by GDP in APAC and are highly representative of the APAC region. Meanwhile, these countries’ ongoing innovative and varying degree of hydrogen development is of great reference value for the EU to consider. Konrad Adenauer Foundation’s Regional Project Energy Security and Climate Change Asia-Pacific has commissioned IPSOS to conduct 57 pilot and in-depth expert interviews with experts from each of the nine countries, with a minimum of six interviews in each country. The interviews were conducted via internet calls between December 2021 and April 2022. On average, the interviews lasted for approximately 60 minutes.

The experts generally agree that their country of interest is making progress in advancing hydrogen economy development, with common goals to decarbonise different sectors, reduce energy dependency on fossil fuel imports, and drive domestic economies by creating new job opportunities. Meanwhile, many of the experts perceive that their countries are only at the early stage of hydrogen adoption as the hydrogen economy concept is relatively nascent in APAC, except in Japan. And to effectively drive hydrogen development, the experts believe that official direction from the national level is fundamental, while most APAC hydrogen economies are now stymied by the high cost of clean hydrogen production and lack of infrastructure for transportation and storage.

In the future, experts believe that hydrogen will be mainstream energy in a decade or more in many of the nine APAC countries. In particular, many countries have been putting efforts into lowering the cost of hydrogen deployment along the value chain and increasing the supply of green hydrogen. The experts foresee that hydrogen will be vastly adopted in the mobility, power, industrial, and non-industrial gas sectors when the cost is lowered to a more reasonable level for end-users.

To accelerate the local hydrogen development, all the experts agree that governments should provide more financial support to public and private entities as many perceive the current financial support as being insufficient. On top of government support, the experts suggest that different stakeholders should build strategic relationships to exchange opinions and technological know-how to facilitate the collaborative development of policies and initiatives. 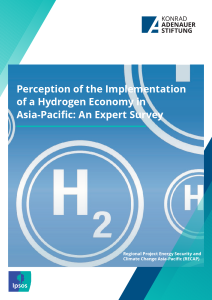