The European Union is planning to introduce a carbon border adjustment mechanism. The survey maps the views of stakeholders and experts in Australia, China, India, Indonesia, Japan, Singapore, South Korea, and Thailand on the scheme.
March 10, 2021 Ordering Information

Although global climate action is growing, under the current unconditional commitments made by Parties to the Paris Agreement, global temperatures are predicted to rise by more than 3°C by the year 2100, far above the goal of 1.5°C. As regions progress in their climate action at different rates, there is a danger that progress in one region, such as the European Union, will be negated by a lack of action in another and that carbon intensive production moving to regions with fewer regulations could cause an overall increase in CO2 emissions. To combat this, the EU intends to introduce a carbon border adjustment mechanism (EU CBAM) that will ensure that the price of imports reflects more accurately the carbon content of the goods. This type of mechanism has not been successfully introduced before on a large scale and the reaction of the EU’s trading partners to the measure will be critical for its success.

This report explores the perceptions of stakeholders and experts in Asia Pacific on the introduction of the EU CBAM, focusing on eight key-impact countries – Australia, China, India, Indonesia, Japan, Singapore, South Korea, and Thailand. These countries make up four of the top 10 import partners for the EU (China, Japan, South Korea and India) and are among the top 10 largest economies in Asia Pacific. As such, the reactions from these countries will greatly determine the level of acceptance or resistance the EU will face in implementing the mechanism. Other countries in Asia Pacific will also be influenced greatly by the reactions of these eight countries.

To investigate this topic, GlobeScan conducted 70 in-depth expert interviews, with a minimum of eight interviews from each of the eight focal countries. Respondents were identified from a range of sectors – academia, private institutions, corporates, governments, and non-governmental organisations. In order to speak freely about governments or institutions with or for whom they work, we elected to anonymise the respondents. The interviews were conducted via internet calls between 19th of November 2020 and 6th of January 2021 and lasted an average of approximately 45 minutes. Respondents who are nationals of the country about which they were speaking were targeted, with the remaining experts comprising those that had been focusing their work and/or research on a particular country for more than 10 years. We asked experts about: the level of knowledge of the EU CBAM among different stakeholders in their country of expertise; the country’s perceptions and reactions to the mechanism; how much they anticipate the mechanism affecting their country; how the EU should approach the EU CBAM; and how the EU can mitigate potential backlash from their country.

Experts agree that in most countries, knowledge of the EU CBAM is relatively superficial and that stakeholders are waiting for details of the mechanism to emerge before focusing on the topic. This knowledge varies by country; developed, likeminded (with regard to climate policy) countries that have high levels of trade with the EU are more likely to know about the mechanism. Perceptions of the EU CBAM will be coloured by stakeholders’ previous interactions with the EU on climate measures as well as their ability to adapt to the mechanism, which will be influenced by the country’s own development level and its progression on climate issues. Countries and producers that have progressive climate change policies in place are less likely to be affected by the EU CBAM, which may disadvantage developing countries.

To ensure the EU does not meet heavy resistance to the introduction of the EU CBAM, experts recommend a prolonged, in-depth engagement period between the EU and countries that will be affected by the mechanism. These talks should be bilateral and involve stakeholders from business as well as government. Experts recommend treating these discussions as negotiations as the EU may have to give some concessions. They also stress that the EU should introduce the EU CBAM slowly to establish proof of concept and allow countries to adapt.

To avoid the EU CBAM being regarded as protectionist, experts say the EU should use the revenue generated to help developing countries advance their decarbonisation efforts. They note that the goal should be to get these countries’ carbon pricing to an equivalent level with the EU at which point their goods would no longer need to be charged. Acknowledging this equivalence of carbon pricing and providing a transparent outline of what is considered comparable is vitally important for other countries to regard the measure as fair. 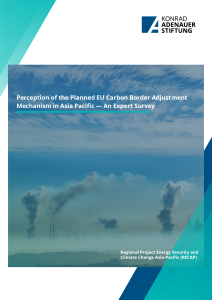