South Korea's Energy Transition and Its Implications for Energy Security

Lessons from the German Energy Transition

South Korea imports roughly 97 percent of its primary energy from abroad. This comes along with one of the highest per capita greenhouse gas (GHG) emissions in the world. Right after the presidential election in spring 2017, President Moon Jae-in announced a dramatic shift in national energy politics. In this respect, the German “Energiewende” (energy transition) might provide some important lessons to be learnt both in conceptualisation as well as in implementation. This study assesses the current situation and draws political implications and recommendations.
February 1, 2018 Ordering Information

The study was conducted by the South Korean Think Tank Climate Change Center (CCC) for KAS RECAP. It comes to the following conclusion:

Asian countries, particulary South Korea, have heavily relied on imported energy sources more than 90 percent (94% of its primary energy). As seen in the inter-chapter, fossil fuels including oil, coal, and gas account for about 85%.

Increased coal consumption due to nuclear power plants safety test after 2011 begot environmental side effects such as particle matter air pollution. Power sector accounts for 60 % of coal consumption for baseload power; and industry does 38%.

Renewable energy in Korea ranked low (lowest as 34 OECD countries). Only 4.5% of final energy consumption comes from renewable energy, but mostly from waste incineration (64%). Currently Korean government announce new renewable 3020 implementation plan to achieve 20% renewable power in energy mix by 2030. For this, 53GW of new renewable energy facilities need to be constructed. As policies tools, the government implements renewable portfolio standard (RPS) for the raise of obligation rate by 28% in 2030.

The current Moon administration declared energy transition as national energy policy direction. The 3020 policy aims to raise the portion of renewable energy from 1.4 percent to 20 percent by 2030. Coal and nuclear energy portion in energy mix aims to be reduced to 22 percent and 21.6 percent respectively by the same due. The current South Korean government is receptive to the concept of energy transition. It would be significant opportunity for experts, civil society, and renewable energy industry to engage in energy transition policy making process.

Based on the identified problems of this study, we suggest following policy recommendations. 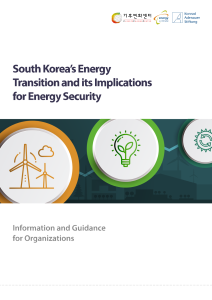