The Konrad-Adenauer-Stiftung has convened experts from Europe, Germany, the United States, and Yemen to provide informed opinions about the conflict in Yemen and on the best way to advance peace among the warring parties. In addition to an analysis of different local, regional and international perspectives on the conflict, the policy paper provides recommendations to German foreign policy.
October 11, 2019 Ordering Information

Recently, there have been important developments in the war in Yemen; a war which has, according to the UN reports, created the worst humanitarian disaster of the 21st century. On the one hand, the United Arab Emirates (UAE) withdrew significant part of its military forces from Yemen declaring the time has arrived for a peace settlement to the conflict. On the other hand, militants of the South took control over Aden from the internationally-backed government amid a fierce armed confrontation between the forces of the two sides leading to a crack in the Arab Coalition that is fighting the Houthis since March 2015. News also has erupted as the Houthis claimed that they managed to attack Saudi Arabia’s largest oil facilities at the 19th of September.

Back in March 2019, Konrad-Adenauer-Stiftung (KAS) had organized a workshop in Cadenabbia, Italy, to discuss the prospects of peace in Yemen after the Stockholm agreement between the international recognised government and the Houthis. Entitled “Yemen’s War: Actors, Interests and the Prospects of Negotiations”, the workshop was attended by experts on Yemen from Europe, Germany, US, and Yemen who provided informed opinions about the conflict in Yemen and on the best way to advance peace among the warring parties. Building on that, KAS has asked experts to write down their analyses on the situation and their recommendations on how to bring about peace in Yemen. They also provide ideas for the contribution German foreign policy could provide.

Christian Koch, Senior Advisor at Bussola Institute takes a closer look at the interests and current issues related to Saud-Arabia and the United Arab Emirates in regard to the conflict in Yemen. Gerald M. Feierstein, Senior Vice President of the Middle East Institute (MEI) and former U.S. Ambassador to Yemen, discusses conditions for ending the conflict in Yemen and also discusses the Saudi security perspective. Adam Baron, International Security Program Fellow at New America, examines Europe’s role in the conflict and on which areas Europe could focus. The local security forces in Houthi-held alHodeidah are the topic of the analysis of Mareike Transfeld, Associate Researcher at the Yemen Polling Center (YPC) and CARPO. Taking a closer look at the Stockholm agreement, she discusses the relation between the security establishment and Houthis in al-Hodeidah and asks to which “local forces” the city could be handed over. Anne-Linda Amira Augustin, Non-resident scholar at the Middle East Institute and political advisor in the European Representation of the Southern Transitional Council in Berlin explains in her piece the connection between the UN-led Peace Talks for Yemen and the Southern Cause. Finally, Abdulsalam al-Rubaidi, PhD Candidate at the University of Erlangen and Research Associate Fellow at CARPO describes the different identities in Yemen and what follows for the conflict: the need for recognition and representation. 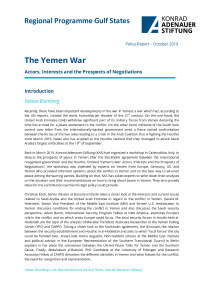