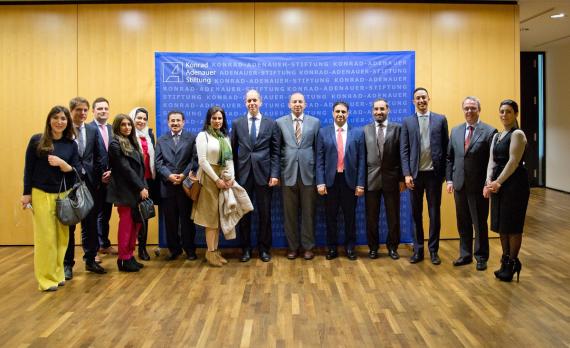 The Delegation of the Gulf Cooperation Council at KAS-headquarters with Dr Gerhard Wahlers, Deputy Secretary General, Dr Abdoulmohsen Alyas, Undersecretary of the Saudi Ministry of Information and Culture, and Thomas Birringer, Head of Team Africa and Middle East.

The delegation, headed by Dr Abdoulmohsen Alyas, Undersecretary of the Saudi Ministry of Information and Culture, included high-level representatives from the Gulf States and the Secretariat General of the GCC. The Gulf Cooperation Council is a regional political organisation based in the Saudi capital Riyadh and established in 1981. The members are Bahrain, Qatar, Kuwait, Oman, Saudi Arabia, and the United Arab Emirates. The main-objective of the GCC is to achieve cooperation among its member states, particularly in economic and security affairs.

Dr Gerhard Wahlers highlighted the increasing importance of the Gulf region for German foreign and security policy considering the current developments in the Middle East. He emphasized the Foundation’s interest in an intensified exchange about common challenges, such as counter-terrorism and regional conflict resolution. At the same time, the Arab Gulf states face increasing transformative momentum, particularly in the field of economic reform and social affairs. Thomas Birringer, Head of Team Africa and Middle East, mentioned that Konrad-Adenauer-Stiftung could foster an exchange of experience with its partners in the region. Dr Adoulmohsen Alyas, the former Saudi Ambassador to the United Nations, emphasised the need to get to know each other better and to improve mutual understanding. The GCC attempts to further enhance its relations with Germany and to explore new opportunities for cooperation.

Konrad-Adenauer-Stiftung is the sole German political foundation with a regional programme for the Gulf States. The regional programme offers multinational platforms to discuss and exchange experiences and best practices for decision-makers and disseminators on matters such as security policy, economic reforms, civil society and parliamentarianism.