Saudi-German Dialogue: Bridging the Gap between Higher Education and the Labour Market

A GERMAN-SAUDI DIALOGUE ABOUT CHALLENGES FOR HIGHER EDUCATION SYSTEMS

A double-event organised by the Regional Office Gulf States in Riyadh brought together Saudi and German experts to exchange ideas on higher education and the labour market at the Council of Saudi Chambers and the Ministry of Labour.
November 2, 2016 Ordering Information 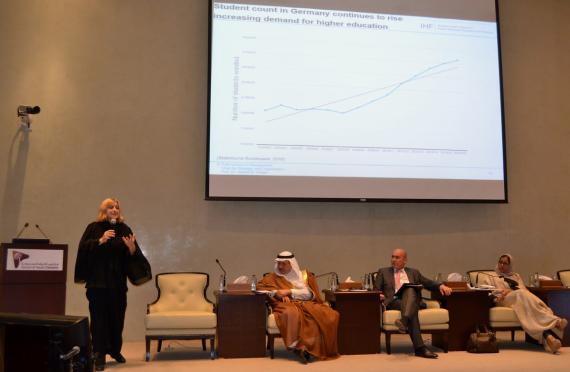 Konrad-Adenauer-Stiftung Regionalprogramm Golf-Staaten
Professor Dr Isabell Welpe, Academic Director of the Bavarian State Institute for Higher Education Research and Planning (IHF), (left) opens up the expert discussion in the Council of Saudi Chambers in Riyadh. HE Usamah Al Kurdi, CEO of ALAGAT, Dieter Walter Haller, Germany's Ambassador to the Kingdom of Saudi Arabia, and Dr Nouf A. Al Ghamdi, President and Founder of Chief Outsiders Consulting Group, (from left to right) are following her opening remarks. 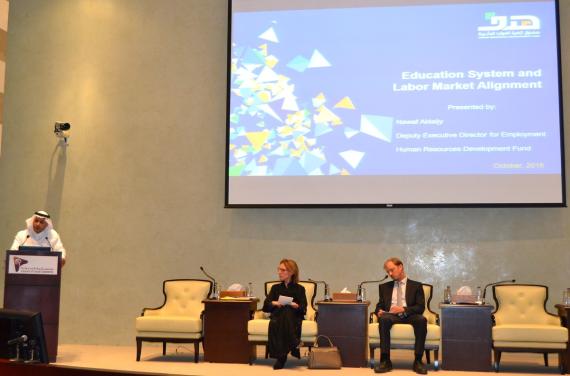 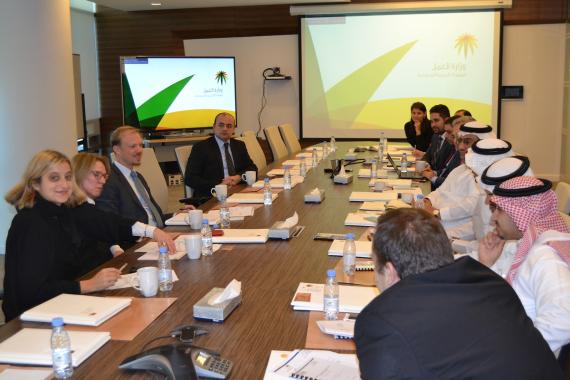 The dialogue was kicked off with a high-profile panel discussion providing a plat-form for interregional exchange on innovative solutions and best practices in education, training, and the labour market. Moreover, the event, organised under the auspices of the German Embassy in Riyadh and in cooperation with H.E. Mr Usamah Al Kurdi, former Shura council member, contributed to the current economic debate and promoted the interregional dialogue between expert communities from both countries. Introductory presentations were given by Professor Dr Isabell Welpe, Academic Director of the Bavarian State Institute for Higher Education Research and Planning (IHF), and Dr Nouf Al Ghamdi, President and Founder of Chief Outsiders Consulting Group, who then moved on to share their expert’s assessment on education policy in a moderated discussion and Q&A session. Subsequently, State Secretary (off duty) Dr Annette Niederfranke, Director of the International Labour Organisation's (ILO) representation in Germany, and Mr Nawaf Al Daijy, Deputy Executive Director for Employment Support at the Human Resources Development Fund, shared their extensive expertise on the development of the labour market situation and future trends in both coun-tries.

All speakers unanimously agreed that the basic objective of a knowledge-based, creative society revolves around promoting new ideas and paving the way for innovation to secure economic growth in the long term. The experts also emphasised that learning and training in an idea-based market economy must be understood as a continuous, lifelong process far beyond formal education. In addition, the German success model of dual vocational training was viewed and discussed as a promising framework of reference for applied, practice-based teaching in both countries.

The subsequent expert discussion chaired by Dr Ahmed Kattan, Saudi Deputy Minister of Labour, at the Kingdom’s Ministry of Labour expanded and deepened the dialogue on education and the labour market. The attending experts concurred that labour market reforms can only unfold their effects in the medium and long run. Furthermore, the speakers added that solutions cannot be transferred from one country to another, but have to be generated and implemented jointly by the state, the economy, and society. Thus, a dual system of training should be designed not only by policymakers and officials but must also directly involve employers and trainees in order to ensure practice-oriented application. Hence, a national dialogue is just as necessary as a social contract between universities and the private sector to stimulate the development of human capital. In this regard, the German model of an economy driven by its innovative middle class was viewed as a great inspiration for Saudi solutions.

The expert discussion, Konrad-Adenauer-Stiftungs’s fourth event in the Kingdom of Saudi Arabia, strengthened partnership-based cooperation and promoted dialogue between the two countries. 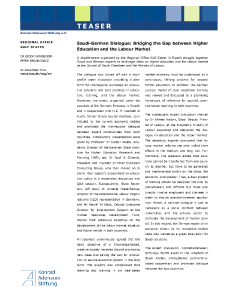 Bridging the Gap between Higher Education and the Labour Market