Preparing our youth for the challenges of the future

Ways towards a more practical professional training, an easier entry into the labour market and means for promoting women in their professional endeavours: participants from Germany and the Gulf discuss the economic and social prospects for an empowered youth in both regions.
November 23, 2014 Ordering Information

RPG KAS
Opening of the two-day conference with young professionals 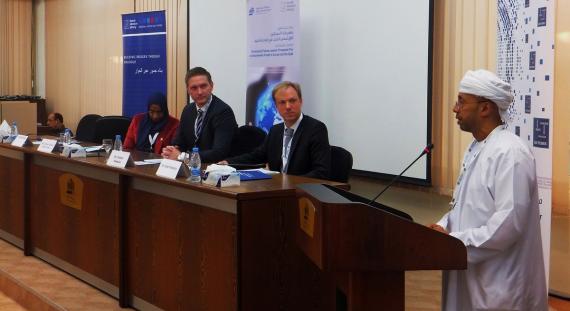 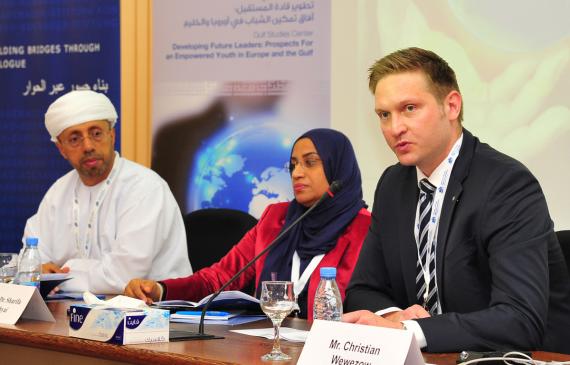 RPG KAS
The keynote speakers from right to left: Christian Wewezow, Head of the Junior Chamber International Germany (Wirtschaftsjunioren Deutschland) in 2014 and Managing Partner at Clockwise Consulting and Her Excellency Dr Sharifa Al Yahyai, former Social Development Minister in the Sultanate of Oman and Visiting Professor at the Sultan Qaboos University in Muscat, Oman, together with Dr Abdullah Baabood, Director, Gulf Studies Center, College of Arts and Sciences, Qatar University

RPG KAS
Delegates from politics, the private sector, civil society and the media attended the event 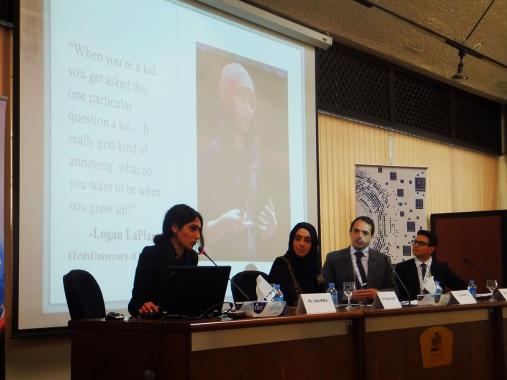 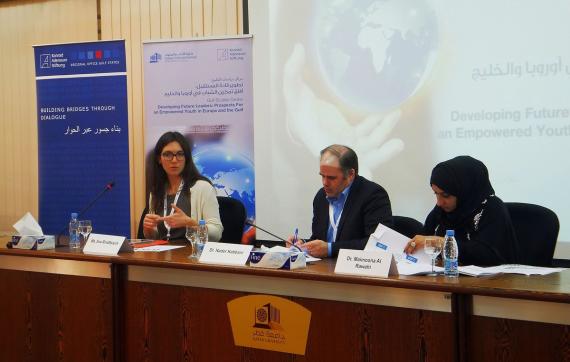 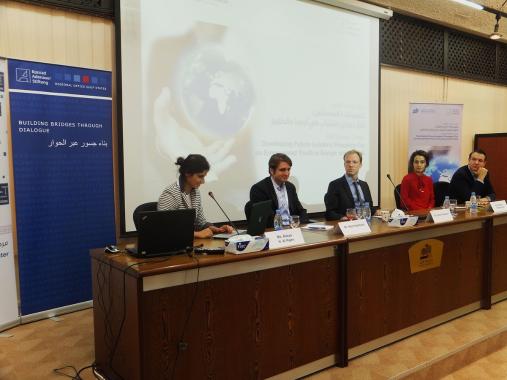 Experts and young leaders from the six Gulf countries and Germany gathered for a two-day conference on Developing Future Leaders – Prospects for an Empowered Youth in Europe and the Gulf in Doha, Qatar, jointly organised by the Regional Office Gulf States of Konrad-Adenauer-Stiftung (KAS) and the Gulf Studies Center of the College of Arts and Sciences at Qatar University. The event was an ideal platform to discuss this timely topic from an interregional perspective.

Leaders exist in every generation and region. They contribute something unique and valuable, to both the world of business and politics. Developing future leaders in an increasingly complex global world is hence of particular relevance to the countries of Europe and the Gulf. Both regions share concerns about the current youth employment situation and are keen to provide the foundation for a prosperous and passionate future work force. Therefore, the conference embraced the motto “we cannot always build the future for our youth, but we can build our youth for the future” (Franklin D. Roosevelt).

In a much acclaimed keynote speech delivered to labour market experts, diplomats, decision-makers and journalists, Her Excellency Dr Sharifa Al Yahyai, former Social Development Minister in the Sultanate of Oman and Visiting Professor at the Sultan Qaboos University of Muscat, Oman, called on the students present to always look out for new challenges on their way into the future and not to be afraid of leaving their own comfort zone. On the contrary, the lack of experience among young leaders which is often criticised by older generations should serve as motivation for the youngsters to continually gain more experience. This was, according to Her Excellency, the only way for young people to confidently confront the problem of lacking seniority on their way into the leading circles. She also underlined that not age but one’s own personal approach was decisive in becoming a leader. Wanting to contribute to the development of their country, their region and the world is the main characteristic needed by leaders.

Furthermore, Dr Al Yahyai emphasised the special status of women in this process, due to the crucial role they play for the development of society by giving birth to their children. Hence society should always be aware of the tremendous values of women. There are however additional obstacles besides the personal approach and the own capacity of leadership, which specifically women have to deal with. These are often structural barriers. For example, the gap between male and female could, amongst others, result from the fact that there were not enough women involved in the drafting of legal rules on the employment of women, as Dr Al Yahyai underlined. This is a deficiency that only politics, the legal system and society together can remedy.

The German keynote speaker, Christian Wewezow, Head of the Junior Chamber International Germany (Wirtschaftsjunioren Deutschland) in 2014 and Managing Partner at Clockwise Consulting, also delighted the mainly European-Arabic audience with his remarks and his insider-experience regarding the topic of Developing Future Leaders. According to Mr Wewezow, supporting young professionals is the best investment into our future. Mr Wewezow, who is a young and dedicated entrepreneur himself, sees great responsibility with the Junior Chamber International, which is the largest association of young entrepreneurs and leaders in Germany, as well as himself for contributing to a development in our society, as the tradition of the “Honourable Merchant” requires. Promoting entrepreneurship among the young generation is of particular, personal concern to him and his colleagues, all of them young leaders, because this generation has innovative ideas which would often present solutions to future challenges and old problems in our society.

Mr Wewezow presented the diversification of the workforce of companies and institutions as a key element to ensure the sustainability of the national, regional and global economy. Surely, the model of the German economy is not the only possible solution. However, it could be worth taking a closer look at the German model of capacity-building. At the same time, Mr Wewezow said he was glad to hear from his colleagues from the Gulf, which measures they were taking to properly equip their youth for the labour market and entrepreneurship. Learning from the experiences of others through dialogue was the expectation with which he had come to this interregional conference.

Participants from both the Gulf States and Germany shared the view that education and training are decisive for the first step towards a successful future. This means that educators bear an even greater responsibility, since they are the ones who have to equip their students and trainees with the necessary abilities to be able to succeed in a globalised world. In this regard, cooperation programmes between educational institutions and the economic sector are of great importance. They enable the development of curricula corresponding to the challenges of the professional world and help avoiding the mismatching of skills between job seekers and the labour market.

In this context, the dual education system in Germany was of particular interest to the audience. iMove, an initiative by the Federal Ministry of Education and Research (BMBF) aiming at enhancing the internationalisation of German education and training services, presented the most common form of training in Germany and shared their expertise with a professional training expert from the Omani Ministry of Labour, amongst others. The latter emphasised that, from the Omani experience, ensuring a solid training of the mentors who will support young people during their professional career is essential for the promotion of vocational training.

However, in light of the high youth unemployment rate in Europe and the Gulf, all conference participants agreed that it was not always easy to simply move on to a professional career after the education period. In the Gulf region, the participation of local workers in the open market economy is extremely low. Due to the relatively strong financial security and support provided by the families, young people often lack the motivation and also the necessity to take up an employment, except when it comes to the very profitable public sector. In Europe, potential young workers face obstacles like temporary contracts and the preference of employers for more experienced staff. Thus, the phenomenon of youth unemployment exists both in Europe and in the Gulf, but the causes for it differ.

Dr Al Yahyai believes that a possible solution for the youth unemployment problem lies in the closer cooperation between the government and the private sector, as it already exists in Germany for example. Although the Sultanate of Oman has begun to integrate its own citizens into the labour market as one of the first countries in the Gulf, the result is still disillusioning after 20 years; since 85% of all employees in the private sector continue to be international guest workers, the unemployment rate among locals is still very high. This phenomenon is wide-spread in all the Gulf States.

But what causes this issue? Is it the fact that the youth in the Gulf is unmotivated and relying too much on the state and their families as support systems or is it rather due to structural problems within the Gulf States’ labour market? This question divided the audience. On the other hand, everyone agreed that it was up to the youth both in Europe and the Gulf to come up with their own initiatives and that the development of entrepreneurship in the most literal sense was indispensable. For this purpose, young people have to be supported by pointing out to them the different possibilities of becoming engaged; creating awareness of the diverse opportunities in different business areas could be one important step into this direction.

Diversity was also discussed in the context of the substantial economic benefits of a diverse, i.e. multifaceted workforce, especially regarding the positive effects of having female workers and women in leading positions. These effects can be seen in the decision-making as well as the problem-solving processes. GCC and German female experts drew the conclusion that it would be a lost opportunity for countries in both regions if they failed to integrate the large number of well-educated women into the respective labour markets and if they denied most leading positions to them.

Having debated extensively about young leaders from both regions, four representatives of their generation got the chance to speak up and outline their views on the topic. For them, it was an opportunity to bring together their own innovative ideas with the longstanding experience of well-established seniors through a dialogue between regions and generations. The question of how they perceived the economic and political worlds which they will inherit one day was answered in different ways: a start-up entrepreneur from Germany argued that, for him, entrepreneurship was a way to contribute to forming and developing society to his best efforts, whereas a young female lawyer from the Gulf underlined that politics and the judiciary presented a chance to make a change in the long term.

With regard to these findings, it can be concluded that youths themselves must be willing to take initiatives; at the same time, the state as well as the private sector need to create sufficient incentives for young people. Additionally, the institutional structures must be further developed in a way that they support rather than bar young professionals on their career path. In Europe as well as in the Gulf a balance needs to be struck between entrusting the youth with responsibility for themselves and for society on the one hand and giving them the necessary freedom for sounding out their economic and societal perspectives on the other.

All in all, the interregional conference between the Konrad-Adenauer-Stiftung and the Gulf Studies Center at Qatar University – the third cooperation between these two institutions – aimed at the exchange of know-how and expertise in the areas of youth and labour market. The debates showed fruitful and positive results. 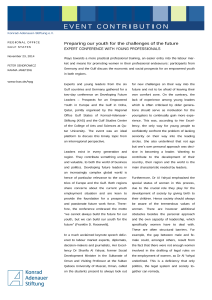 Preparing our youth for the challenges of the future (Pdf)
Download