People’s representation in the Gulf region

A RESEARCH PROJECT ON THE LEGISLATIVE AND ADVISORY SHURA-COUNCILS

Although tribalism and hereditary monarchies primarily shape the political system in the Gulf States, there are – against widespread assumptions – parliamentary and parliamentary-like systems in all states of the wider Gulf region. Now, as the first systematic venture of its kind, an ambitious research project analyses these representative institutions.
October 6, 2016 Ordering Information

KAS_RPG
The workshop's participants and organisers of the Regional Office Gulf States and the Gulf Studies Center of the College of Arts and Sciences at Qatar University. 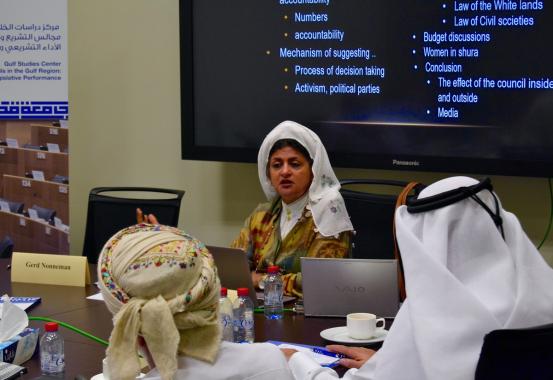 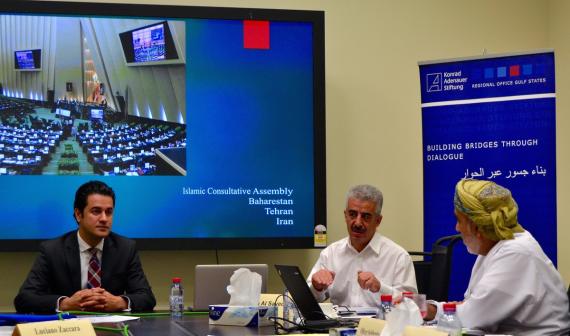 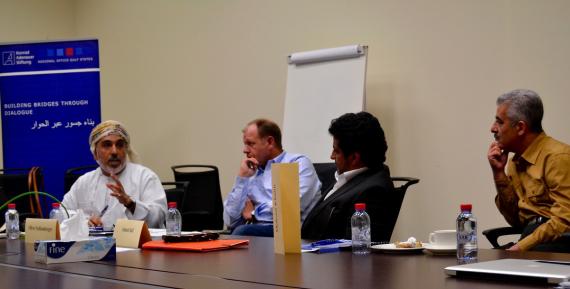 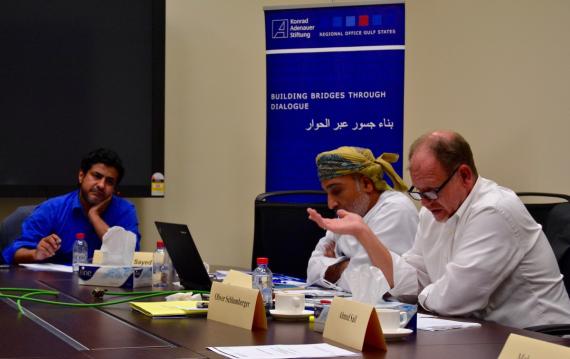 KAS_RPG
The Qatari participant Dr Hassan Al Sayed (centre), Associate Professor for Public Law of the College of Law at Qatar University, gives his presentation on the Shura Council in Qatar.

In cooperation with the Gulf Studies Center of the College of Arts and Sciences at Qatar University, the Konrad-Adenauer-Stiftung conducts a comprehensive research project to analyse representative bodies of the people and parliamentary-like institutions in the six Gulf monarchies as well as Iraq, Iran, Yemen and the Autonomous Region of Kurdistan. Based on last year’s kick-off workshop, the follow-up workshop from 21-22 September 2016 in Doha, now concentrated on the diverging competences of the legislative and advisory councils, the assignment of members of parliament, electoral mechanisms as well as the citizens’ role in these processes. Subsequently, their ramifications for the region’s political development were evaluated.

Moreover, the lively exchange and open dialogue during this workshop brought up new thought-provoking questions: In how far are the bodies of representation authorised to initiate, support or veto new laws? Do parliamentary institutions in the Gulf have professional sub-structures, such as committees? What are mechanisms to hold the institutions accountable? Which parts of society are represented in the Shura Councils and what are the incentives to run as a candidate? How do citizens regard the representative bodies and how are they portrayed in the media? Another question that repeatedly occurred was what role the peoples’ representations take in public dialogue and how they interact with the executive and judiciary as well as other institutions, such as municipal councils, chambers of commerce or tribal and family councils.

At the introductory workshop in November 2015, local experts from the respective countries had already reviewed general differences of the representative bodies in the Gulf countries. These differences are particularly visible in the competences assigned to them. While representations in Bahrain and Kuwait have some legislative competences, Shura Councils in the UAE, Qatar, Oman and Saudi-Arabia play a principally advisory role. In the future, the region hence faces the great challenge of enhancing the Shura Councils’ authority, especially with respect to electoral processes and legislative decisions, in order to foster political representation in the countries. The attributes of the Shura Councils in Iraq, Iran, Yemen and the Autonomous Region of Kurdistan underline the heterogeneity of parliamentary institutions in the region. In these four countries the representative bodies have an advanced authority in legislative processes, which stems from the very historical development and socio-political struggles.

The study is a pilot project, which systematically examines, assesses and compares legislative and advisory Shura Councils. This year’s workshop focused on the research progress and discussing empirical data in order to create a basis for the impending publication. The workshop provided a platform for the researchers to present their case studies, to discuss issues and findings as well as to refine and develop their research design. The presentations and discussions of the analyses mainly revolved around the methodology and the councils’ socio-political context to make the case studies correspond in their structure and to underline their comparative character. In addition, the participants exchanged their experiences of collecting data and conducting interviews with council members and politicians of the respective countries. This demonstrated that the studies not only carefully chose methodological tools, such as surveys, but they were also adapted to the countries’ socio-political context.

Until the end of this year, the researchers will integrate the results of the discussions into their case studies. In the following year, the results will be published in an encompassing reference work on parliamentary representation in the Gulf. The research project is the sixth cooperation between the Gulf Studies Center at Qatar University and the Regional Office Gulf States. 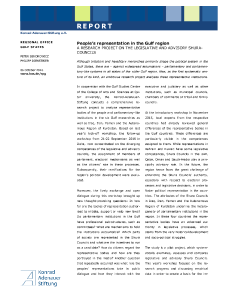