While the European Union (EU) and the member states of the Gulf Cooperation Council (GCC) are seeking to broaden their cooperation to various sectors ranging from economic cooperation to energy, environment and scientific research, the scope for cooperation in the field of security still remains particularly large. This becomes highly salient in light of the many common challenges that the EU and the GCC face, such as energy and food security, the conflict in Syria and the fragile transition in Yemen.
November 17, 2013 Ordering Information 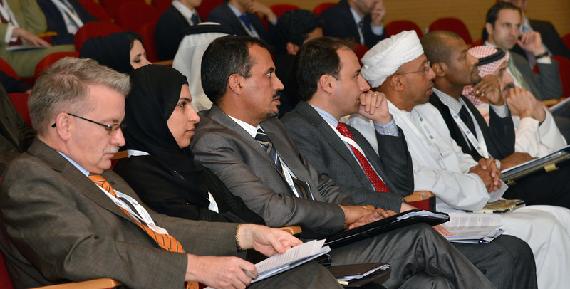 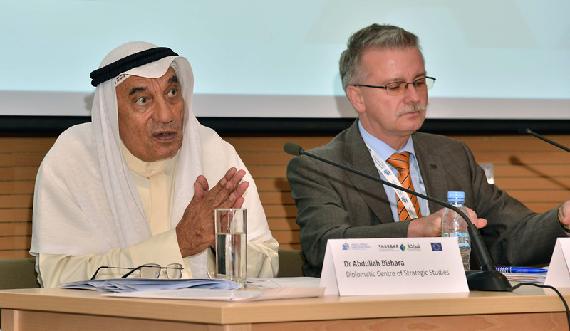 Ambassador Abdullah Bishara, the first Secretary-General of the Gulf Cooperation Council (1981-1993), and Michael Gahler, Member of the European Parliament (EPP) 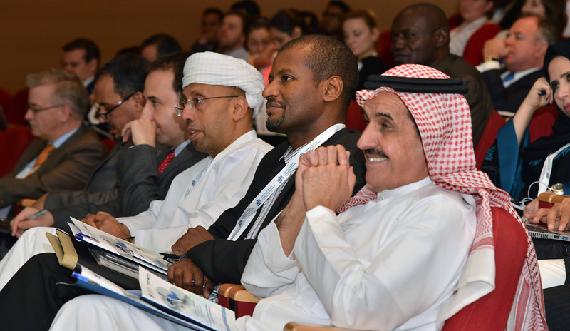 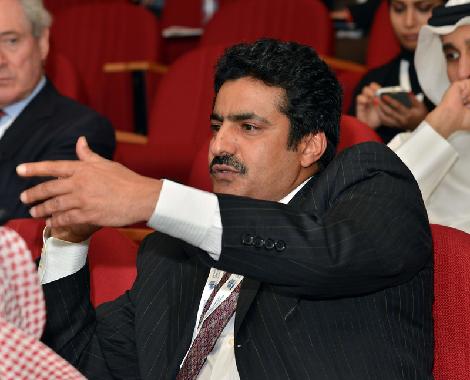 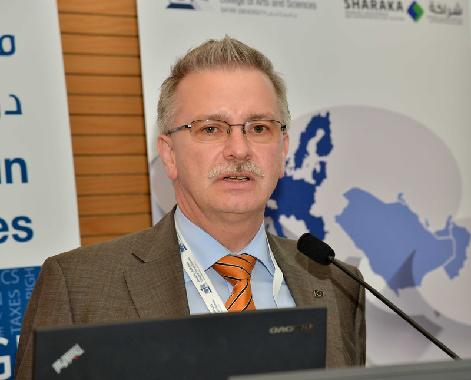 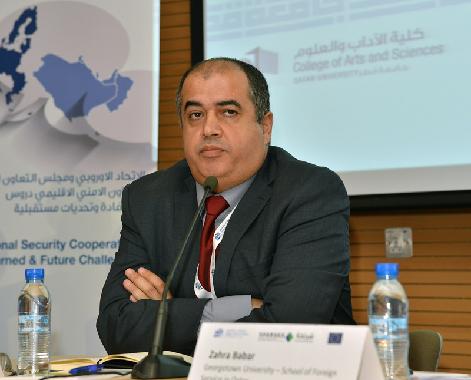 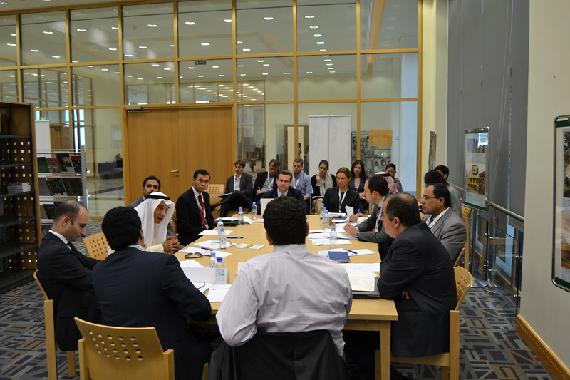 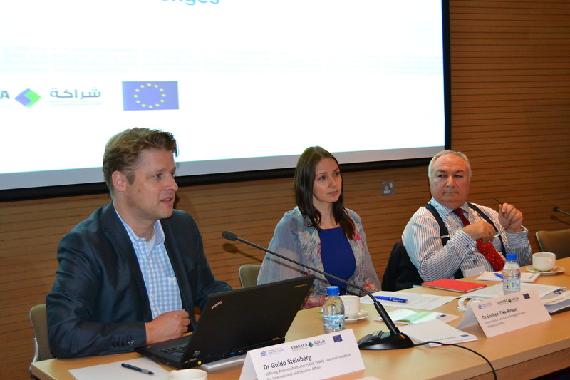 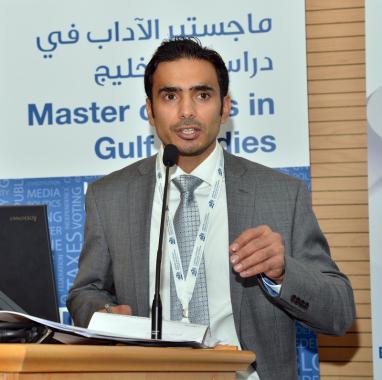 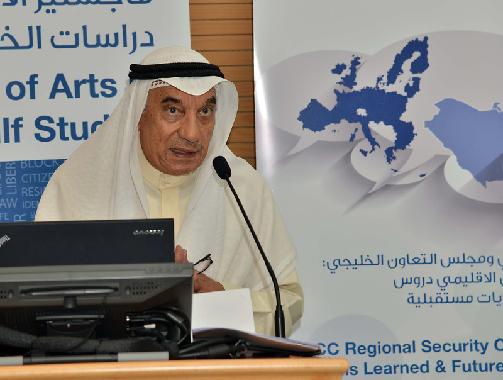 Ambassador Abdullah Bishara, President of the Diplomatic Center of Strategic Studies in Kuwait and the first Secretary-General of the Gulf Cooperation Council (1981-1993)

Bearing these challenges in mind, the Sharaka project and its partners from Qatar University (Gulf Studies Program at the College of Arts and Science) organised a two-day event to provide the platform for fruitful debate between academics and scholars, officials and politicians, as well as civil society actors from the EU, the GCC and other Arab countries. The “EU-GCC Regional Security Cooperation - Lessons Learned and Future Challenges” conference took place at Qatar University on 28-29 October 2013.

The conference kicked off with two thought-provoking keynote speeches. Ambassador Abdullah Bishara, first Secretary-General of Gulf Cooperation Council, talked about the premises of the EU-GCC dialogue at the time of its inception in the late 1980s, arguing that the EU and the GCC had a common interest in de-politicising energy and containing radicalism by committing to resolve crises through dialogue. These premises, it was hoped at the time, were there to become ‘sharaka’, i.e. partnership. But even 35 years after the first EU-GCC dialogue was held in Bahrain, true ‘sharaka’ has not yet been achieved.

Some areas of productive cooperation, such as consultation on central banking, money laundering, inflation and energy (including renewable energy) stand side by side with major misunderstandings and obstacles in other areas. The impossibility to finalise the EU-GCC Free Trade Agreement (FTA) remains a major concern across the Gulf. On top of that, there is the idea that the EU is not committed enough to preserving stability in the region, and overly committed to spreading its own human rights standards and ideas of democracy, which are seen as not necessarily compatible with the socio-religious identity of the Gulf.

The second keynote speaker, Member of European Parliament Mr Michael Gahler, underlined other potential areas of fruitful cooperation between the EU and the GCC, such as counter-piracy and the training missions in Afghanistan and Palestine. Nevertheless, he also mentioned the frequent setbacks in the relationship as well as the momentous challenges that lie ahead. For example, he acknowledged that the EU does not have the capabilities to replace the United States in a strategic security partnership with the Gulf and will not have them in the foreseeable future given its 20 percent cut in defence spending. At the same time, the EU can hardly ignore its founding principles, which commit it to human rights promotion, and the lessons learned from its own mistakes, which make it wary of sectarianism taking root in the region as well as the political use of religion. Finally, Mr Gahler underlined that it is hard to move ahead in the FTA negotiations if GCC integration is still so weak. The EU appeals to the GCC to undertake stronger integration, which would also be in their interest, as it would make it harder for third parties to separate them.

Following the keynote speeches, a discussion about rising powers and the challenges to regional governance took place. Speakers with different backgrounds debated this very timely topic before entering a lively Q&A session with the audience. Dr Mehran Kamrava, Director of the Center for International and Regional Studies and Professor at Georgetown University - School of Foreign Service in Qatar, highlighted how the alleged US strategic shift towards Asia as well as the new developments in Iran could indeed mark a moment of transition in regional governance. The profound US presence in the region has long defined the GCC’s foreign policy as one of band-wagoning, which explains the feeling of abandonment and/or entrapment that is circulating in most Gulf states vis-à-vis the possibility of a US rapprochement with Iran.

Dr Ayman Khalil, Director of the Arab Institute for Security Studies in Amman, agreed on the idea of a transition, especially regarding the rise of new security paradigms. For the first time, Dr Khalil explained, Egypt and Syria are not key actors in the region’s security anymore, while two new security axes are emerging, one headed by Turkey and the other by Iran. Prof. Matteo Legrenzi, President Elect of the Italian Association for Middle Eastern Studies (SeSaMO) and Associate Professor at CA’ Foscari University of Venice, however, discarded the idea of a transition as more of a perception than a reality, underlining the basics of the security architecture in the Gulf and the tropes that periodically arise but hardly materialise. Prof. Legrenzi further argued that creating a regional security framework is almost impossible if the preconditions set by Iran are that the United States has to leave the region and that the GCC should not sit at the table with the United States. Moreover, neither China nor NATO are in a position to replace the security umbrella provided by the United States: China has repeatedly stated its interest in maintaining an apolitical role while NATO can offer capacity building or security sector reform but not the kind of security guarantees the United States provides.

Dr Rolf Schwarz, Political Officer, Middle East and North Africa Section - Political Affairs and Security Policy Division at the NATO Headquarters in Brussels, responded to this point by underlining that NATO is not only engaged in capacity building, but also in intensive political consultations with Gulf states, especially after the approval of the New Strategic Concept. In addition, there is a sustained dialogue to enhance understanding and cooperation, for example by advancing interoperability.

The first part of the second day of the conference was devoted to discussing the most pressing current security challenges, namely: transnational terrorism and cyber-security, food and energy security, and the cases of Syria and Yemen. In each working group, two papers were presented and discussed.

Finally, the conference ended with a roundtable discussion followed by a vibrant debate among participants on the future of EU-GCC security cooperation. Some speakers of this session mentioned unrealistic expectations as the causes of past setbacks in EU-GCC relations. For example, a stronger, more unified role in EU foreign policy in the foreseeable future. The question then arose whether the GCC has a real interest in seeing the EU act as a unified actor in foreign and security policy, a realm in which the GCC is not itself unified. In Syria for example, the Gulf states are united in calling for regime change, but divided on whom to support.

Substantial divisions among Gulf countries could also arise vis-à-vis a potential US-Iran rapprochement. One European argued that a security partnership with the EU should be envisioned as a means not to counter military threats, but rather to prevent risks from becoming threats. The EU is the right partner for a whole range of risk management activities such as cyber-security, migration and border control, conflict and post-conflict management, reconstruction and disaster relief, and maritime security.

The two-day conference shed light on several obstacles to a strengthened EU-GCC security partnership, as well as significant misunderstandings and key unanswered questions, such as the way forward in the Syria conflict. Nevertheless, the European Union and the Gulf Cooperation Council continue to hold regular talks and deepen cooperation in some, perhaps more technical and less strategic, areas. As a matter of fact, in many of these areas, cooperation has become fundamental and irreplaceable. This leaves room for hope that the differences that seem particularly sharp right now will slowly be dealt with and that the EU and the GCC will finally find a partnership model that suits their mutual interests, both in the Middle Eastern region and globally. 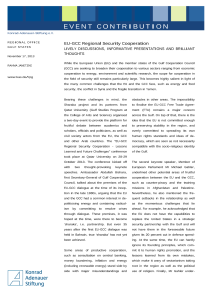